The Fear Creatures, the Siren, and the Mist Filled Path

by jocelyn Townsend 8 months ago in Horror
Report Story 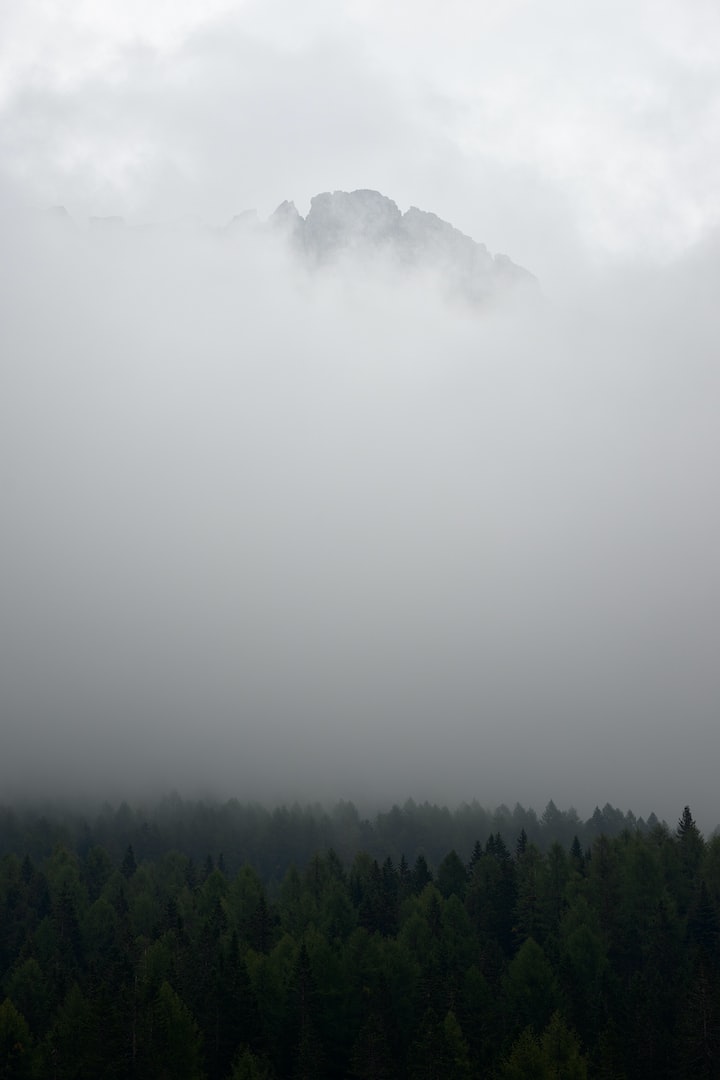 Photo by Federico Bottos on Unsplash

It wasn't so much that anything happened when the mist was thick, besides a trick of the light that left my neighbours alert--the unknown has always caused men to tremble. Simple men, I called them, who feared the mist. They differed from me, who, with the mind of a scientist sought the unknown and found wonder in ambiguity.

I loved the fog; for once its' brilliance veiled my body, so I could be seen in a different way--when my bellowing breath moved the mist, leaving goosebumps on the necks of the passersby. They wrote myths about people like me, though they won't call us that--people.

People like me, we speak into the darkness whose' ears like the ear of no man's God listens and sometimes calls back in bird song or coyote. Never alone, something the fear creatures did not understand. That's what I called them--fear creatures, simple men. They lay down the laws of horror as if divinity were found far from around us and the mist furthered that divide, so when the fog lay thick, all men stood alone and not together.

That night, the fog was thick so I could not tell the sea from the sky. So when the tide crept up on my covered feet, I only felt the water once my socks were damp and shoes squeaking with every step I laid. I was imperceptible to my neighbours, apparently. Regardless, I kept myself company good company. My musical feet drummed with each step and the crows hollered back! Despite the lables made through simple retorhic, this was no cacophany. This was a symphony, sounding for those attuned to natures notes!

The simple men wrote stories about me, like they will for you who walk alone. I agree with parts, I was beautiful, though no a seductress. I loved my solitude and never looked to men for good company. Despite the stories they told of me, I thought I was kind and generous, though not the victor; I cannot attest my memories as fact, so they died with me, until this day.

I remember that my long hair would wrap around me like a blanket to keep me warm or sometimes knot up to comfort my cheek against the the ground so I asked for very little from the simple men or the Earth as I needed very little.

On those nights, in the fog, the distance between me and the fear creatures was liberating. It kept me company. I was free to be seen, fully, by the darkness, mist and moon. I was not afraid of the dark. I feared the simple men who feared nature. For most of my life, I accepted my fate, as I did that night.

That night, everything that was hidden suddenly unveiled. The moonlight dissipated across the murky atmosphere so that the space once considered empty revealed how much it held secret.I repeated words to myself in sing-song tones and parced them much to my glee. The word wonderful encapsuled how I felt about the fog: wonder-full, wonder filled, full of wonder. They did not see it that way; I know.

Through the fog, all that is seen under blue skies gains a mystery, that for the wonder-filled explorers provides us with an effervescent excitement that elucidates us momentarily. We shrill! We shreak! We are seen and heard for our sounding joy! We who love the mist feel we stand closer in it noting that the thickness of the atmosphere keeps us apart.

As the crows called out at the squeak of my shoes, my steps called back. My hair tickled the back of my neck and my ears filled with a cold dampness that gained velocity, so I knew that the crows swooped nearby. Having packed a pouch of bread before wondering outward, I tore pieces for them to feed on. The soft crumb of which grew damp and doughy as my finger kneaded the loaf's center, forming tiny balls that could easily be picked up and swallowed. I chirped, sparrow like I presumed, to alert the birds of their dinner. I try not to blame myself for what this would do to people like me. My intentions were good and not to blame for their hell.

The road to hell is paved with good intentions. That's what the fear creatures say. They said this for generations before and will continue to for generations to comes. that is the real horror, though you may not see it that way. You are wrong.

The road to hell is rickety, and leads us nowhere but home, to heaven on Earth, back to the mist, where the fog lay thick over the water, allowing for us to eat and grow, should we not die off on the way. Hell's path is adorned with seeds of invasive fear that spread like uninvited species that overtake what had been their for so long.

Those who sculpt the path tell us that the moaning mourns of grievers sound like ghosts needing to be exorcised and are treacherous. We do not grieve on this path, so despair becomes us. We become simple men despite our true identities. We whittle ourselves down to the words we must whisper for survival and die paradoxically.

The road to hell is paved with fables masked as truths, with fear preachers labelling themselves as love and light and good intentions. I don't know if they truly believe what they say and I never will because when I come back here, the tide will rise so high, I will learn to fear what I once loved. I know this even now that I am crow to the crows, hawk to the hawk, peering down omnisciently.

I was the celebrating the fog that night, fearing nothing. I was peaceful at least. On the night I fed the birds, the tide had risen, so that the ordinary seashore was blanketed. I took my shoes, leaving behind my sing-song companions as I ventured through the waters. There was a mound of rock that during low tide could be walked to easily. During high tide, it peeked out from a few feet of water, requiring you to swim. I had done both many times, so my body embraced this path like family.

The train of my robe was wet. I didn't mind, but I took it off so I could use my lap as a table without soiling it further. Unteathered kelp lapped with the water, which I grasped, plummeting my hands into the ocean to forage it to garnish what was left of my loaf, most of which was honestly too wet and salty for my preference. The kelp was dark and luminous. I spread it in my lap; it's smooth, slim and slimey blades covered my crossed legs. I tore off the soaked pieces of crumb and called again for the crows. The trill of my voice echoed anc ehoed until met with a cry.

It was fast; the mist sharply and thinly parted when the crow sounded like a high pitched thunder, falling with lightening speed. I would have feared had the mist been there or not. An arrow struck my bird friend's breast. All the near by crows fleeted and swarmed, perhaps that's why they said I was part bird, if not for the birds that laid upon me and our bones that would be found one day, together. Who knows how a story developes over time, except that the words change as the retelling gets tiresome.

I don't even remember what struck me, or if the light was of a lantern shone or celestial. Just that there was light and a simple man calling from out at sea, "Siren! Wench! Witch!" I don't know what he did to my body. That's what I tell myself. That is my lie. I chose not to watch that part, but I know their are things you can see with your eyes closed.

Afterwards, in lives to come, I'd hear stories of me, the siren, seductress. I hadn't yet started to bleed, that is my horror. But, sometimes between walks on the Earth, when my soul longs for the mist and the crows, I come down, sometimes possessing pens, pencils, quills and keyboards, nearby the water, to write my untold truths through the tools of the living. I dare not take their bodies as was done to me; that is left for the living and I choose to be kind. I give my spirit to dead things. These stories that they think they write are ghostwritten through the tools of the writers and I am the ghostwriter that goes unknown.

More stories from jocelyn Townsend and writers in Fiction and other communities.