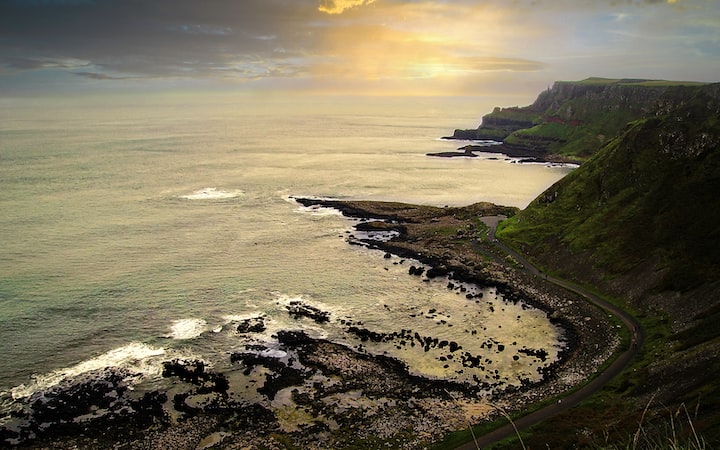 An external world existed beyond us.

It coexisted and functioned just like Earth did. The astronomers’ failures to notice its resemblance brought the end to life as we knew it. A supernova was the "Entrance" to its core. The three largest constellations collapsed. And with their deaths, so did we. We were taught as kids that the universe hid an infinite number of mysteries ready to be discovered; instead, the Ursa Major, Hydra, and Virgo had been, since millions of years ago, our perdition—the ruin of the universe.

This planet was there, rotating miles per hour. It was always there.

The creatures we knew as being an outcome of genetic mutation weren't actually warnings that something bigger than ourselves already existed.

A massive entity of its own was approximating Earth. It did not come from the bottom of the ocean as we all expected; as a matter of fact, the deep sea barely forewarned us all of what was coming.

On July 21st, 2029, three dead sharks were found in Santa Monica, California. I'm afraid to say this was only the beginning of the end. Three sharks meant nothing at the time, but what came next…what came next was destruction in its raw form. The Earth was burning, turning its children into nugatory dust. Starting from South Africa and spreading all over the world, every kingdom and domain disappeared like it never existed. There was nothing we could have done to stop it. It was too late already.

Ursa Major swallowed half of the Solar System, leaving scientists out of options. Not even Albert Einstein could have ever imagined this was the end.

The end that only led to more destruction and suffering.

The new age is beginning.

“...new age is beginning,” I hear a robotic voice repeat three times. Was it really repeating it, or was it the echo in my ears? I feel disoriented, beaten, and drained. My head weighs twenty pounds right now, pounding and hammering. I try to move my hands, but I soon notice they are tied to each arm on this weirdly wide chair. Where am I? What is going on? I feel blood running down my nose to my lips. My throat’s dry and rough; my own saliva burns my throat whenever I try to swallow it. My eyelids feel too heavy against my closed eyes. I want to move. I want to talk. But I can’t. I sob and whimper instead. “...she lives selfishly and freely among us humans, weakening and controlling our minds…” the voice continues chanting.

“Shut up,” I manage to mutter under my breath.

I tightened my grip on the chair, trying to steady my breathing. Vague images of what had transpired before run through my head like racing cars, one after the other, trying to get to the finish line. But there’s an interception as one of the cars gets to first place. The ones behind it start to malfunction, getting kicked off the tracks. They’re spinning and spinning, bumping into one another, creating a huge black cloud of smoke. Several cars catch on fire, shattering people’s hopes of there being any survivors. Minutes of victory turned into an utter catastrophe.

Whatever breathing exercise I was trying to use to calm myself down turned into hyperventilating. I was inhaling and exhaling short breaths, which didn’t help stabilize my heart rate. I could enter a state of shock right now for all I know.

What a funny word when you believe to know what it means. We know what comprises panic. We know its definitions and types. We know it as a concept and a disease. But panic…panic is just a fact for the ordinary and the privileged. It’s in our heads, but because it’s in our heads, we can feel how it clutches our souls like a vine. How it pierces our lungs till we cough up blood. And how it stops our hearts every microsecond, torturing us until we beg to be release from its poisonous hands.

Panic is just a fact we know so little about, but it is all I could hear whispering in my ears.

I can feel it coursing through my veins. Any sense of control I managed to obtain throughout my short life, had vanished in matter of seconds. I don’t know where I am, or why I’m here. Or maybe I do know the where and the why, but admitting it would only feed my panic. Ignorance had become my ally the way trust had become my sorrow. The moment I blindfolded my eyes to reality, was the exact same moment I let my natural enemy win our unspoken competition. I let them murder me before they had the chance to stab me; even, one could say my letting him get too close was handing them the weapon myself. Too close? He had become my reason to look forward to Mondays. My reasons to not wanting the week to end. But I was just his pawn. His target. His toy. And now I, and God knows who else, was paying an atrocious high price for letting my walls crumble.

I feel how panic rapidly starts turning into grief.

Five stages. Five different challenges. How does one get through grief when you have already accepted the situation? If you start with acceptance, are you really coming to terms with what happened? Or is that denial in disguise? Is that rationalization? Compensation? Accepting the mild pain to avoid dealing with the different suffering each stage brings. Is that really accepting? Maybe crying and shouting was acceptance. You cry because you feel dejected and a hollow of loneliness. And you shout because you feel anger, anger that is conjured up by the terrors of denial and depression. Maybe grief could be dealt with by performing two tasks only; a reduced form of sorrow. Maybe that is all it took.

So, I scream and shake my body in that weirdly wide chair. I squeeze my eyes and move my wrist up and down and in circular motions trying the free them from the tight rope. I scream louder as I feel the buzz of the electro current increase with my calling for liberation. If I can’t free myself, at least I’ll leave them in complete darkness. The background noise is muffled by the intensifying buzz, causing tears to roll down from my shut eyes to my chin. I grieve the past months of believing he was someone he wasn’t. I grieve what became of me and how my perspective of the world changed. I really believed deep in my soul life would be more, that I would be more.

Happiness to me was accomplishing my goals, making my parents proud, and taking on my innate responsibilities. It was a duty, a collateral damage. But inevitably, it was also part of being lonely. How could you experience true happiness if you let people around you define it? Wouldn’t that be naïve selflessness? Letting someone be your happiness? I thought so until he proved me wrong. It was impossible to look at him and not have the word “happy” pop up in my mind. It only took a smile to make me forget my so rooted principles of happiness. It only took him to be in the room.

Truth is, I had no idea how to deal with the feelings that were replacing that happiness.

I was so blind that I believed him with my all.

That single thought made my screamed even louder, causing few lightbulbs to burst. Given that, the buzz had lower, giving me a better sense of what was happening around me. I still couldn’t open my eyes. I didn’t want to come face to face with my new reality. New? More like “old you chose to ignore.”

“We need to sedate her now! Before she causes a calamity outside of this facility. Hurry up!” I hear a woman with an accent yell to whoever was rushing all over the place.

“DO NOT TOUCH HER!” my grip tightens as he yells. He’s here. I sob as I let that new information sink in.

“Restrain him!” a man yells this time.

What is going on?

More tears stream down my shut eyes. I start jerking my head and body around desperate. I want to go home. To my mom, my dad, my siblings. I want to annoy them one last time before driving back to campus. I want to bake with my mom and steal my dad’s fried chicken when he’s not looking. I want out of here.

“You know what to do,” someone whispers in my ear.

“...love,” I gasp as I feel his hand on my shoulder, “open your eyes,” my body starts to relax almost by reflex. As if it knew it was off table hurting this man. I start taking longer breath and open my eyes slowly.

I couldn’t help but gasp at what I saw. I thought he’d be in uniform, acting like a soldier in duty. But he was far from that. He was beaten and bleeding and still had the same clothes on. He looked worried and rigid. But I could see beyond those precious eyes. He wanted to tell me a million things all at once. He, too, was experiencing grief. He looked sorry and defeated. Conflicted even. But then again, maybe it was all part of another act. One where he makes me believe he was blindsided, so I would continue to trust him.

He cups both of my cheeks as he tries to speak, “I am so sorry,” a lonely tear rolls down his left eye as he chokes on his words. “I am so sorry,” he repeats when some men in white come to drag him away.

“Nick!?” I say as panic sets back in, “Nick!” I scream as someone injects a sedative in my neck.

Dreamer wandering the wonders in this world. ✨

More stories from Valentina Montagna and writers in Fiction and other communities.