Fred and Jared, born in slavery, spend their days digging for buried dragon's eggs. Should they successfully deliver an egg to their master, they will be freed. But when they finally find one, will they really give it up so easily? 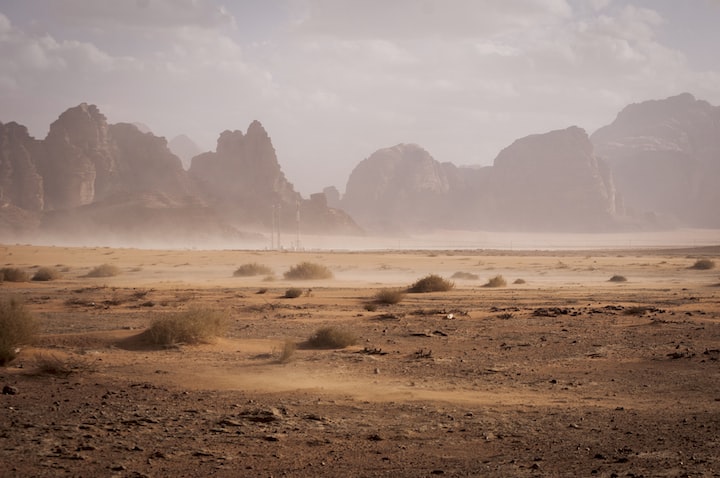 “There weren’t always dragons in the Valley, you know.”

Jamming his shovel into the dusty ground, Jared slumped himself over it and wiped his forehead with his sleeve.

“Don’t be absurd,” he said, looking around suspiciously.

The air felt heavy with the heat, and the two men could hardly see five feet ahead through the brown sand swirling around in the breeze – not to mention the beads of sweat dripping regularly from their brows.

Not that it mattered. The object of their work was right below them, and they were chained in place from their ankles. Why would they need to know what might be going on somewhere else?

Fred, the older of the two, was reclining inside the hole they had been digging, his left foot jutting out at an unnatural angle to accommodate the allowance of his chain.

“I’m not being absurd,” he said simply.

A silence. Jared slowly pulled his shovel out of the ground, then suddenly stabbed it back down again, causing a cloud of dust to rise and dust itself over his face. Fred pretended not to notice, though they both knew that he had.

“Well, explain yourself, then, will you?” Said Jared irritably.

He had never coped well with the heat, that boy, Fred thought to himself. If only he would relax a little more. He nodded to himself, tilting his head back against the sand and feeling the strength of the sun through his eyelids.

“I will, Jared,” he said. “I’ll explain my thought process to you, Jared.”

“Right. Well, dragons lay eggs, right? They are born from an egg.”

“So, think about it. That can’t have been going on forever.”

“Well, Jared – if every dragon is born from an egg, then there must have been a time in which there were no dragons – only eggs.”

“Then again, Jared – and this is what is stumping me a little bit, I will admit – where did all the eggs come from?”

Jared emitted a low, gurgling sound of frustration, pinching the bridge of his nose with his fingers. Yanking the shovel from the ground once more, he pointed it towards the hole – or, rather, towards Fred, who was sitting in the hole.

Fred looked blankly at him.

Fred blinked. Standing over him like that, with the huge sun directly behind him, Jared sort of looked like a very powerful deity – all silhouette and bright lights. There was a certain beauty to him, it had to be said.

But what, thought Fred, had come first – the dragons, or the eggs?

“But Jared,” he said, making the decision to voice his thoughts. “What came first? The dragons, or –”

Fred’s sentence was cut off by the sound of Jared emitting a high–pitched scream.

“But Jared,” insisted Fred, widening his face in gentle innocence.

“What?” screamed Jared, his entire body – and thus the shovel – now vibrating in fury.

“What do you think came first?”

“I’ll kill you!” Jared screamed, his body bursting out of its constraint. Lunging forwards, he let the shovel fall to the ground and joined Fred inside the hole, falling down head-first as his ankle strained against his chain.

They shuffled around inside the hole for a bit to the sound of Fred’s manic laughter and Jared’s irritated grunts, their propensity for violence limited to weak punches and hair-pulling. Eventually, they settled down, and Fred patted Jared on the hand.

They shook hands, then clambered out of the hole and brushed themselves off. Then, in one of those moments of destiny, teleconnection, or sheer coincidence, they both decided to peer down the hole at the very same moment. And then they looked back up at each other, wide-eyed and speechless.