by Stephanie Lm 6 months ago in Short Story

Who guards the door in a drug house? 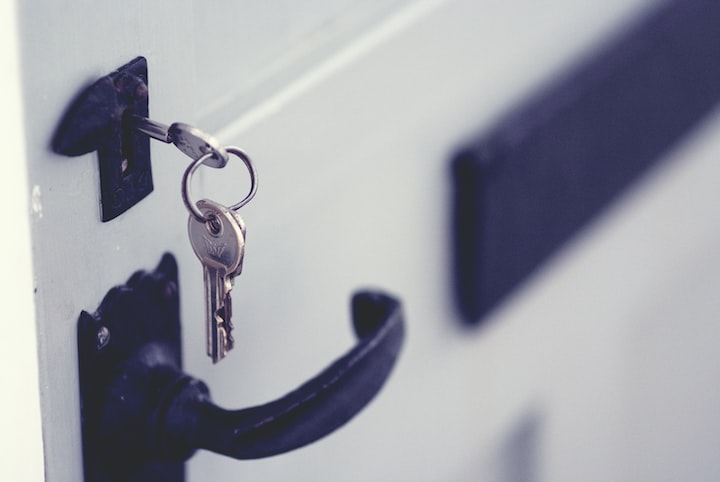 Photo by Jaye Haych on Unsplash

I pull my blinds open just a crack. It's usually too dark for me to see who they are, but the urge to know who awaits me is too strong not to at least try. Like an atheist who checks her horoscope every day despite rejecting the existence of a divine plan, the innate urge to know the unknowable is too tempting to resist.

I tighten the chain into its slot. Safe. The weight of the deadlock is under my small hands. I peer through the security door.

And so it goes... I peer through the blinds into darkness, check the chain, turn the deadlock, eye through the security door.

Some knocks demand instant attention, not entertaining my desire for order.

I never have time to check my blinds before the door is kicked open. Again.

We didn't always need a deadlock. There have been so many raids. The security door clings onto the wooden frames, pleading the walls to keep them standing. The thick metal of the deadlock is the only thing that will hold our door to the broken hinges.

The worse knocks are the accidental ones made by a shadow climbing over my fence. No, that's a lie. The worse ones are the ones from inside the house when everyone else is gone.

I used to keep a knife under my bed. However, I learnt that self-defence would not protect me from the law during a legal studies class. If I killed an intruder, I would still have risk imprisonment. I swapped my knife for a blunt pole and frying pan.

It was instinct always to have my phone by my side. I wish I could have called the police. Mum said that would be selfish of me. She didn't want the house ruined by another raid and her son taken away. The phone was to keep the camera filming, just in case anything happened to me. I hoped someone would know how I died. If not, they would always have my journals. If someone wanted to know my thoughts after my death, they would find my letters.

"If I'm found dead..." I would scribble across countless journals.

There was one time when I couldn't be brave. I tried to text my brother.

"Teo, there's somebody in the house. I locked myself in my room."

The stranger told me I had the wrong number and wished me luck.

Mum and my two brothers changed their numbers so often, and I saw them so rarely that I was never sure if the numbers I had saved under their names were still theirs.

No police. No protection. Just a broken lock to keep me from the shadows on the other side of the door.

When I was brave, I would imagine that my body was not that of a small teenage girl. I imagined I was everything I detested. I was the hundred-kilo man with the strength of a bear. Whoever was in my house, they would see my size. They would hear my strength.

I would scream at the top of my lungs and act as manic as a person on ice. I would throw things into the darkness. If I met eye contact with them, I wanted them to see the craze in me. I wanted them to feel the heat from my stare. If I was lucky, my neighbour might hear my scream and run to my aid. The help stopped coming after the years. It happened too often and was too much risk for my neighbours to keep stepping in.

Unlike my brother, my cousin was his own doorkeeper. He didn't have a little sister to stand between him and the strange men that came knocking. He had no shield or little metal chain to protect him.

I don't remember the man's name, the one who did what he did to my cousin, but I do remember his wife. She has the same name as me, another Stephanie Lam. My brothers wanted to pour petrol into his mouth and light him for what he did. He ended up in prison. Whether he's still alive, I don't know. I almost felt bad for the other Stephanie. She was associated with a murderer; how safe would she be from the revenge of men?

My cousin hadn't checked the security door that night. He had twenty thousand in cash and more in drugs tucked in his bedroom. The man was his friend, of course he knew exactly where to find it. My cousin died by his front door, a knife in his neck. His mother wept, holding her son and begging him not to die. He had his veiled protection that he was a strong man. Who could hurt him? He and I were both doorkeepers, delusional in our indestructibility. He didn't have what I had; the luck needed to escape the life of the doorkeeper.

I write on my memories growing up in a migrant family entangled in crime, drugs and murder. I write on the love and fear I had for the people around me. I write on the meaning I found coming out of hell.

Read next: ESCAPE OF THE GREEN ANTS