The four boys didn't believe the story until one of them unleashed the monster. 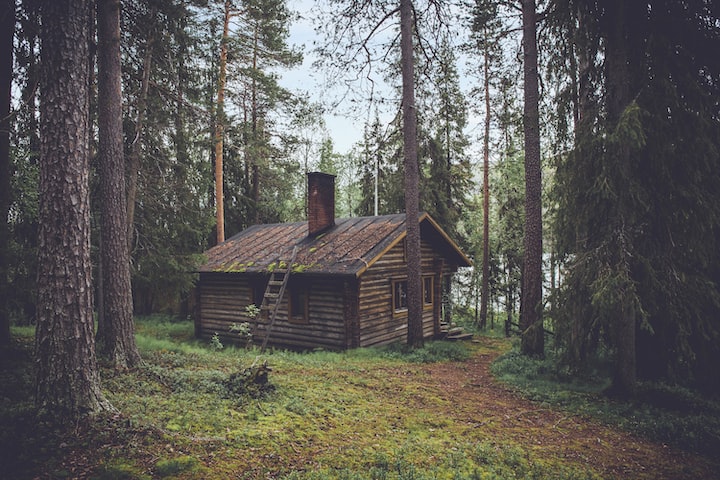 'The cabin in the woods had been abandoned for years, but one night, a candle burned in the window. Some said it was the boy. The boy who got stuck in the chimney coming to reclaim his clothes.

Kids from the wrong side of town. The four biggest delinquents at Sunnyvale yet all completely gripped by the ghost story. It was always the same, take them out on an outdoor retreat and the big men normally crumpled. A ghost story by firelight would always do it.

'What happened to the boy?' Donny, the school drug dealer, asked.

'To the boy, well, no one knows. He went missing. They found him seven years later stuck up the chimney in that cabin. He had died from dehydration. His vocal cords showed signs that he had been screaming for his life for days before he died. No one heard him.'

'Must have been high,' Samuel smirked. It wasn't surprising that Sam had come up with this theory; he was Donny's best customer. When his parents cut his allowance off, he threatened the younger kids in the school for money. Someone had to pay his best friend and dealer back.

'Fuck, that must have been some good shit,' Donny giggled.

'He wasn't high. What remained of him was tested; there was nothing in his system.'

'This is ridiculous. It's a stupid ghost story, you bunch of girls. This trip is pointless. I'm going home.' Lee was the youngest of the group, and it wasn't surprising he found the trip pointless; he found most things pointless, including school. He got up and started striding off.

'Careful you don't get lost.' I called after him. 'You never know who you might meet in the woods.'

I watched him storm off 100 yards before looking around him. Then, finally, he turned and made his way back to the fire.

'It's too fucking cold,' he sat down.

'Please finish the story. Then we can sleep.' Paul, the quietest of the bunch, said. Paul, the quiet nerd, didn't fit in with these three. He was small and sensitive, a good student. Top of his class until a week ago when he had lost his head in a Science lesson and beat the teacher. She got a broken cheekbone and split lip. Paul got excluded. No one knew why he had reacted the way he did; Paul wasn't talking. I had taken him under my wing. Promising the head teacher I could straighten him out if they gave him a second chance.

'So no one knows why he went to the cabin, what he was doing or who he was with. They say you can still hear him screaming for help if you listen carefully. Joshua Maddox, his name was; look him up when you get home.'

'It is,' Paul whispered. 'My mum talked about the case all the time. She went to school with the kid's sister, Kate. The sister thought he had run away and was devastated when they found her brother's body. She just got her shit together, then stories about the candle in the window sent her mad.'

Everyone was quiet for a couple of minutes. What do you think happened to him then? Sam asked.

'I don't know. For whatever reason, I think he took his clothes off. Maybe to keep them clean and then climbed into the chimney head first. His clothes were neatly folded in the house by the fireplace.'

'Maybe someone punked him,' Donny said

'I don't know; got him to go to the cabin, stripped him and chucked him outside in the cold, made him climb down the chimney to get his clothes back. He got stuck and they did a runner.'

'They meant to kill him if that's what happened.'

'The chimney was blocked off inside with a breakfast bar.'

It wasn't long before the other three delinquents, yet terrified teenagers, took themselves to bed. I watched the fire die before taking myself to my tent.

It was a month after that night that I returned to the cabin. I knew he would be here. It was always the same. Tell the story to a group, later he would be there. I put a match to the candle in the window, watching the light dance and waiting for the knock at the door.

I thought I had imagined the tap at first. Opening the door, he stood there precisely in the same clothes as before. As if his mother was no longer around to wash his clothes. His father dying when he was small.

'I knew you would come.'

'I couldn't not, not after the last trip. You told the story so well.'

'Want to climb up to see the top of the chimney. Don't worry; lightning never strikes twice. You're more than safe. Just one thing might sound weird.'

'The latest owner is fed up of all these kids climbing up to see the chimney; he painted the roof with that back tar stuff that gets on your clothes.'

'No worries,' he said as he stripped to his shorts and undershirt, 'You're coming with me, right.'

He nodded and made for the door. I watched as he climbed up the side of the house onto the roof. Swinging my leg over the tree branch, I joined him on the roof. He went to the chimney, leaning over to look down into the black.

It takes moments to fold a person's legs into them and push them down a chimney. I should know I have done it every seven years since Joshua. I learned from my mistakes, and since then, none of the other boys had a family. No one to miss them, no one to report them missing. Just another teenage delinquent did a runner from life.

I could hear Paul's screams as I walked away. No one would find him. I made a note to send the Science teacher some flowers. If she hadn't commented on Paul's mother, I would have never known she had gone missing, leaving him home alone.

If you enjoyed this article, please subscribe to my writing, share it and give it a heart. As a writer tips and pledges mean a great deal to me, so a massive thank you if you send one.

More stories from Sam H Arnold and writers in Fiction and other communities.