Grandma said it would be a slice of cake. 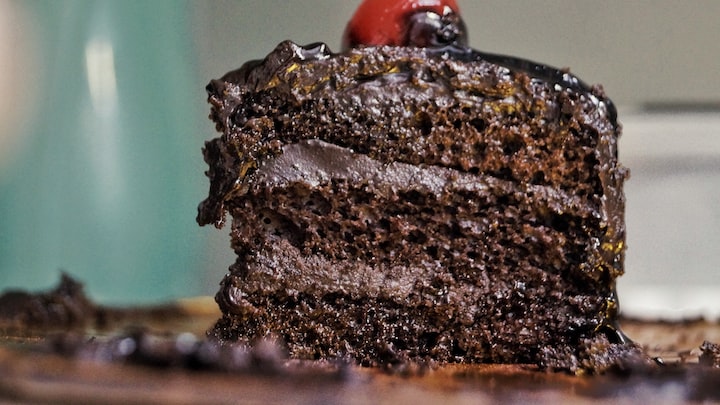 Coughing, Grandma squeezed Tim’s hand and gave him a watery smile. “I had a dream last night that you will be meeting your future wife soon.”

“Grandma!” Tim protested, knowing his grandma, who had lost her husband only a year before after a golden 56 years of marriage, was determined to marry off her 31-year-old grandson.

She gave him a harder squeeze this time as her raspy voice said, “You’ll know it’s her because she will order a slice of chocolate cake for dessert on your first date!”

Tim was used to his grandma claiming her dreams could predict the future. Sure, she had predicted the great blizzard that had frozen the pond at her and Grandpa’s farm when Tim was 12, the week he learned how to ice skate, falling so many times as grandma and grandpa patiently taught him how to skate. She had predicted that he would win the spelling bee in 5th grade, and she had also foreseen that senior year his baseball team would win States. Grandma had a long-standing habit of believing that her dreams projected the future. Numerous times, Tim had seen how right she was, but she had gotten one major thing wrong. She had told him she dreamed of getting married on a beach to his college sweetheart. Grandma was correct; there was a beach wedding, just Tim wasn’t the groom.

He hated seeing his grandma sick, so to appease her, he said, “I haven’t been on a date in a while” Tim prayed grandma wouldn’t prey into what “awhile” substituted as because he had no desire to lie to his sick grandma.

Grandma closed her eyes, a small smile on her lips, letting his hand go to pull up the quilt; she said, “It will happen soon enough.”

“I’m going to let you rest, grandma,” Tim said, kissing her fevered forehead and making sure she had a glass of water by the bed; he left for the evening.

Four days later, Tim woke up to see a large moving truck pulling into the driveway of the yellow cottage next door. He heard the home had sold but hadn’t realized the new residents were already moving in.

After a quick breakfast, he headed outside to mow his lawn, as he did every Saturday morning. Halfway through the task, he saw a large yellow lab racing across his yard chasing a squirrel. He cut off the mower and heard a woman’s voice calling out.

“Chloe!” As Tim leaned down to pet the happy dog’s head, the woman came bounding over. “I’m so sorry, I was carrying a box in, and she must have escaped from the yard” The woman’s cheeks were pink, her brown hair in a messy ponytail, but he found her honey-colored eyes captivating.

“No worries, Chloe seems friendly,” He said with a smile as the dog paced around them with her tail wagging a mile a minute.

“That she is, she’s a people lover, or Chloe knows that humans often give her pets and treats,” she said with a big smile before popping out her hand. “I’m Reese, and this is Chloe.”

He shook her hand; it was small and delicate. “I’m Tim; I’ll be around most of the day if you need anything” Geez, why did I say that? He thought.

The feeling faded with the bright smile she gave him. “Thanks! I’ll try to make sure you don’t live to regret that offer” Her smile was infectious; he had to grin back at her. “Come on, Chloe!”

She told him goodbye and how it was nice to meet him and headed back over to her home while Tim stood by his mower and had to shake himself out of a daze to finish his chore. But he found himself distracted thinking about his pretty new neighbor.

Several hours later, Tim was flipping through take-out menus when he heard a knock on his front door. He answered it to find Reese waiting on the doorstep. He found his heart hammering as he realized just how pretty she was. She had her brown hair down and was wearing a sleeveless blue dress.

And her smile was enchanting. Tim found himself wondering if she was always this happy.

“Hi, Tim; I was wondering if you had any restaurant suggestions?” Reese looked inside the house, and her smile grew even more prominent. “Zelda fan?”

He turned and saw her attention captured by his painting of the Water Temple from his favorite game. He felt mildly embarrassed, and that startled him. Tim considered himself someone who stayed unruffled.

“Yeah, I enjoy painting, and yes, my paintings are all based on Star Wars or video games,” He admitted to her.

“Can I come in and have a better look?” She asked before stepping inside to marvel at his clay Yoda and other paintings.

“Is it just you living here?” She asked as she studied the gaming titles neatly lined up on the shelves.

“Yeah, just me” He stuffed his hands in his pockets.

“I’m hungry. Do you want to come with me or make me fend for myself?” She turned with a huge grin. He couldn’t help it; he returned the grin.

“I know the perfect spot.”

They kept the conversation flowing as they journeyed to his favorite restaurant and took a table overlooking the river. He was pleased with Reese’s ebullience. She greeted everyone with a charming smile and eagerly studied the menu.

They both ordered steak, and he watched her devour her meal while still maintaining the conversation. He learned she was like him, never married, and recently transferred to the local University. They both found amusement that they both had attended the same college.

After Reese had eaten every last bite on her plate, she leaned forward and said, “How’s the dessert?”

“Dessert?” His conversation with Grandma came floating into his mind.

“I could go for a slice of chocolate cake.” She said with a shrug and a huge grin. “I’m a sucker for sweets, especially chocolate,” She admitted to him as she took a sip of her water.

“You know what, a slice of chocolate cake sounds wonderful.”

Read next: A Time And A Place