by Evan Dottridge 2 months ago in Horror

The rules of fair play do not apply in Love and War. 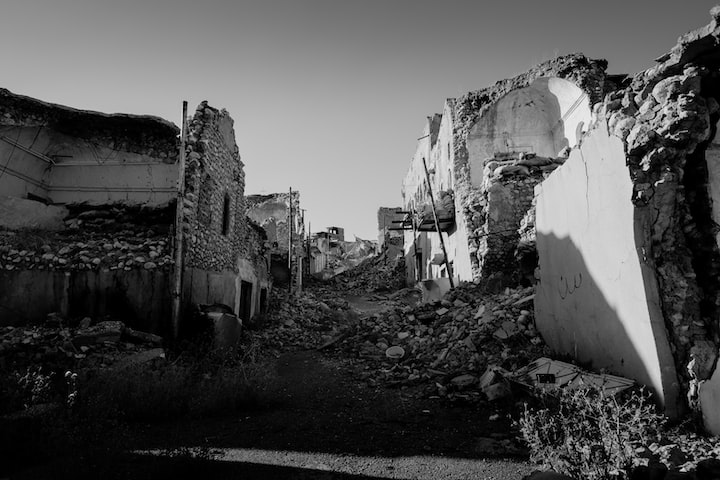 Miles from my bunker, thousands of bullets rain from the sky and fools with mouths wide open try to catch them as if they were snowflakes. All for a country that has damned them to a living hell. Damned them to be killed and sent down to the exact same torture. Yesterdays infiltration of the enemy camp was merely a pyrrhic victory. We lost three quarters of our squad during the attack. I barely dodged the reapers grip myself last night; two of the arseholes that hid during the attack stormed our bunker and sprayed a volley of bullets into our bunkbeds. They slayed Corp. Larry and Pte. Amiel as they slept. Luckily, I was still awake during the depredation. I shot them both before their fire could deter downwards. Jerry awoke and cried out in surprise like a kid post-nightmare. Which, I suppose, is what we are. Kids suffering a nightmare.

I'll never forget having to heave their bodies out of the bunker and into the camp. The way David's eye hung limply on his cheek, still attached to a fleshy red string. I can see their faces when I close my eyes. Is this what they call early on set PTSD? Perhaps that is why I don't sleep anymore.

I know, I know, I am not blind to my own defects; I signed up for this job. But I refuse to...

A hair-raising explosion jostled the bunker, cutting the young soldier from his writing. Debris rained from the ceiling and blended with vestiges of past fallen detritus on the floor. Alex glanced from his diary to Jerry, who lay face up on his bunkbed. The fusillade outside hadn't stopped all night, yet Jerry had been imitating car engines for roughly five hours now. Alex spent a lifetime blocking out the stentorian snores and concentrate on his writing, and now they imposed over his senses once again. He looked at his slumbering compadre with eyes wiped of any hatred, but gleaming with envy. Alex hadn't been blessed with much sleep as of late, especially after what went down last night, and had instead substituted sleep with writing. He found it easier to write down his thoughts then dream of them, anyway.

Another explosion rattled the bunkbeds, this one closer than the last. Jerry made a loud rev of his mouth and bolted upright, almost thwapping his head against the bed panel above. His eyes circulated into focus and rested on Alex.

"You watching me sleep or somethin'?" he asked with the natural grumpy demeanour of a man who had just awoken.

"I was watching to make sure you didn't choke on the chainsaws you were snoring up," replied Alex.

They stared at one another coldly in the silence that had been taken over by gunfire. Then a curve wove it's way into Jerry's lips, and they both relaxed with a chuckle.

"I could kill for a cup of anything hot right about now," said Jerry as he cracked every bone the skeleton consisted of in one long stretch.

"There's nothing hot to serve anymore but killing comes in plenty my friend," said Alex flatly as he finished the last sentence of his diary.

Jerry moaned and lurched out of bed. He looked up at the bloodied sheets on the bunks above. He grimaced indignantly.

"Ain't fair what happened to them. Not at all."

Alex didn't need to observe what he was talking about. "The rules of fair play do not apply in love and war," he muttered.

Jerry walked to one end of the bunker, procured a backpack, and heaved it over his shoulders. "That another a quote from your books?" He asked.

Thomas responded with a bewildered shake of his head and asked if Jerry had never heard the saying before. When Jerry motioned that he hadn't, Alex replied: "It's a famous idiom. A Lyly quote, I believe."

"Well, don't know who this Lye Lee fellah is, but he was clever with his proverbs. And correct, too. Now have breakfast and get your shit together. We're moving out."

Thomas nodded and stood up. He unzipped his backpack and parted the lips, unveiling a jumbled assortment of rations. He reached inside and foraged for a bottle of water. After a few seconds he found it. He took three large gulps, screwed the lid back on, and threw it towards Jerry. He neglected to mention, however, that the bottle was flying his way.

"Ow!" cried Jerry as the bottle ricocheted off the back of his sturdy skull. "Want to watch where your lobbing those things? Could knock a man out."

"Corp. did always say to keep your helmet on," retorted Alex jovially.

"Funny, as Corporal didn't exactly stick to his own rule last night, did he?" Jerry replied, tasting the sourness of his words as they left his mouth. It was too early for jokes like that.

The bunker quaked like a sprung jack-in-the-box as another onslaught of artillery whistled down outside. Alex was thankful this time. It cut out the awful silence. Jerry gestured towards the bunkers exit.

"Careful as we leave. Don't know if there's any more of 'em out there."

Thomas opened his mouth to insist that he didn't have to be reminded, but Jerry was already outside the bunkers threshold. The first element of the desecrated environment that impeded on Alex's senses was the smell. They had only dragged the bodies a few metres away last night, allowing the stench of decaying flesh to swim up their noses eagerly. Thomas' stomach lurched drunkenly as he bypassed the recently made corpses. Jerry either didn't seem to notice the odour or had grown unwelcomely climatised to it over his years of service. Thomas surmised it to be the latter.

The soldiers moved forward with utmost trepidation. Two deer's in wolf domain. Every corner promised a new shadow for Thomas to unholster his gun, only to realise that it was not a soldier in red, but simply an innocuous shadow reflecting the outlines of a dilapidated building or fire-damaged, forlorn military ambulance, which Thomas considered an adequate metaphor for war; surrounded by loss and neglection, those that are there to serve and succour are the only one's to truly suffer.

"Now, Alex, remember, this place is a minefield. Well, you know, figuratively speaking. Hopefully. What I'm trying to say is, we don't know who survived the attack. So keep yourself on gua-"

An ear piercing crack. The din of overstimulated ears. Jerry's eyeballs widening in horror, and then sliding upwards in release. Another crack, deafening and yet dismally audible. This was the order of Alex's last moments.

A hot cramp struck Alex' back and surged up his spine. He wanted to turn but his body betrayed him and instead he fell to his knees. He slid involuntarily across the rocky camp, cutting through the gravel and shaving his kneecaps. A sharp burn slinked from his chest up to his throat and expectorated out his mouth in red, viscous liquid. The cramp suffused from his spine into his shoulders and arms, slowly making its way up to his head. His vision floated for a moment, then capsized and hit solid ground. His head thundered as it collided with the pavement. There was no time to to contemplate what had happened before his eyes grew stony and black. He felt a warm trickle from his lower spine where the cramp had initiated. The streetlights blinked like golden eyes, watching his body slowly relapse. His ears screeched like thousands of cars slamming to a halt. As the blackness of eyelids gradually (slowly, so slowly) waned, a stout, leather object pillared down in front of him. He peered above the closing lids, and what he saw stare back at him, even with dying vision, he could make no mistake. It was the barrel of a gun. The demon wielding it was familiar too. One of the soldiers that infiltrated their building last night. Alex grinned grimly. He must been faking it, the clever fucking... A flare of fire lit somewhere between his eyes, somewhere above the nose, somewhere below the brain.

In his final thought, Alex reminisced on one memory. The final sentence of his diary...

I refuse to die for this country.

Currently studying Media / Performance, with focuses on working within the film industry. I enjoy writing the odd short story, and exploring the profusion of wildflowers that the World has to offer.

Read next: A Castle Full of Dragons