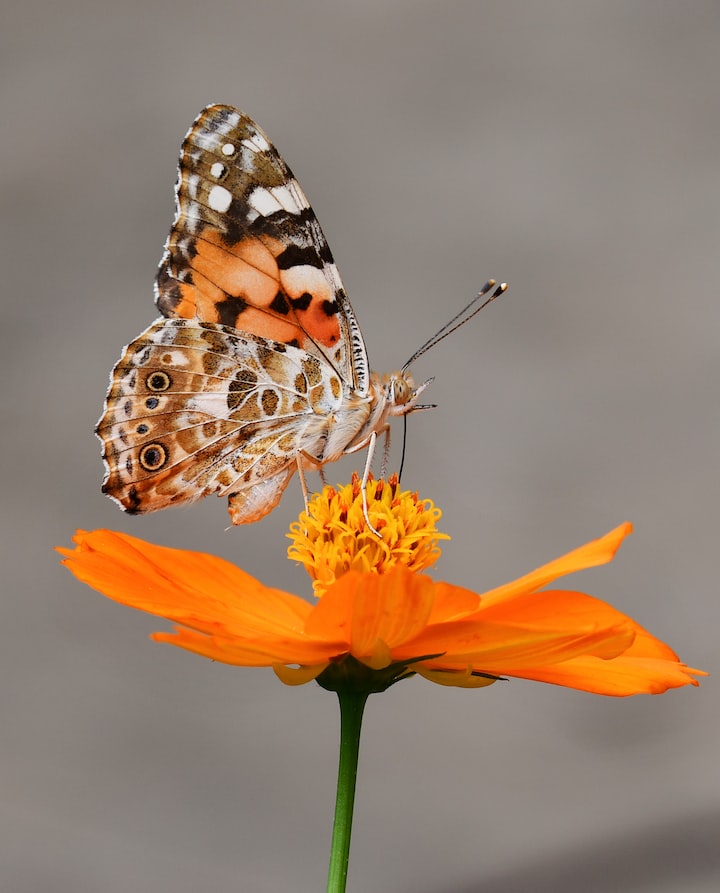 Photo by Yuichi Kageyama on Unsplash

The butterfly princess is also going to pick nectar, there is a small butterfly and she flew into the flowers, they picked a lot of nectar, with the trumpet flowers into a basket, filled with a basket, and now they want to go home.

But the little butterfly's heart can be bad, he thought, if they take this honey back, then the king will not be heavily rewarded him, ah, so he said to the butterfly princess: "Princess Princess, look at you so tired, or let me carry it." He took the basket of trumpet flowers and flew into another bush.

There was a spider web in front of him, and the malicious little butterfly suddenly shouted to the princess: "Look down there, those flowers are so beautiful." The princess looked down and didn't notice the spider's web in front of her, so she ran into it.

"Help me." Princess Butterfly struggled on the spider web while shouting at another butterfly, but he had already carried the nectar-filled trumpet flowers and flew away.

A big spider came crawling toward her.

"Help, help!" The butterfly princess shouted, there was no echo around, in desperation, she had to tear off the sticky wings, and fell into the grass, to save her life.

The butterfly princess has no wings and legs, and can not fly home, she was very sad, sitting on the grass leaves and crying out.

"I have no more wings, I can't go home." The butterfly princess said.

"But you still have hands and feet, weren't you a worm before?" The little ant said.

The little ant's words gave the princess butterfly hope again, she stopped crying and decided to try to live. The little ant was leaving.

"Where are you going, little ant?" Princess Butterfly asked.

"I'm going to find the spider with a thousand hands." The little ant replied.

"Spiders are bad, my wings were eaten by spiders." The butterfly princess said looking up at the wings stuck to the spider web.

"No, the spider with a thousand hands is very kind, she only eats flies and mosquitoes, I am now asking her for a spider web to catch big green bugs." The little ant said.

"I want to go and see it too." Princess Butterfly said.

"Sure." The little ant said.

The butterfly princess followed the little ant to a forest, where there were spider webs everywhere, like a cloud.

"Look." The little ant pointed to a spider web and said. There was a good-sized spider up there, and she was shaking her little shuttle to weave the web. When she saw the little ant, she scratched her head with the shuttle and pointed to the next spider web, and said: "Your web is ready, have you brought the flies?"

The little ant tied a pocket full of flies with a piece of spider silk, watched the thousand-handed spider tug the pocket up, and nodded, before climbing up the branch and using pieces of snail shell to cut down the spider web and ball it up.

The spider looked at it and said, "It's not difficult, but you have to exchange 20 flies for them."

The butterfly princess was overjoyed, but where could she get twenty flies? The little ants decided to help her, they hung the spider web on the most flies side, and soon caught enough flies, the spider was often satisfied, she only used her small shuttle in the butterfly princess broken wings "brush brush brush" a hook, ah, a pair of snow-white crystal wings molding.

The bumblebees flew overwhelmingly, but they were looking for death, stuck to the spider web, and had to wait for the sun to dry them into jerky. The butterfly kingdom ushered in a new spring.