by S.D. Kang 11 months ago in Short Story · updated 8 months ago
Report Story 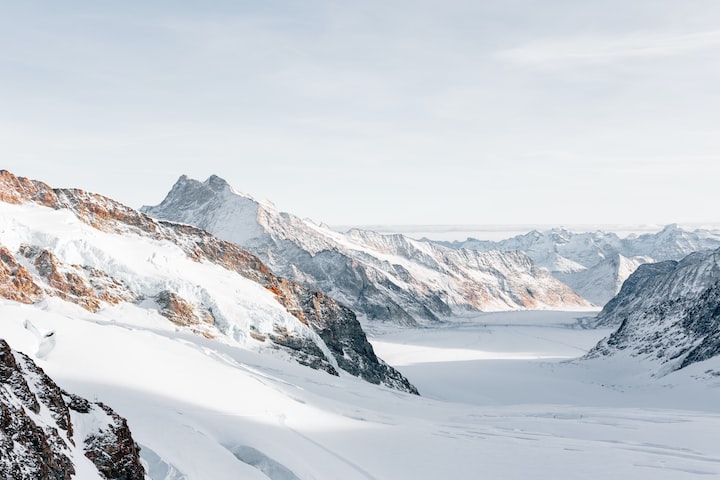 Photo by Erol Ahmed on Unsplash

The little happy tune woke him up as usual. He had chosen that particular one because he thought the lightheartedness of it would wake him to a good mood. But even before the first year was over, he started to absolutely loathe every note in it. Despite that, he still kept it as his alarm eight years later because he found himself actually waking up to turn off that annoying tune as quickly as he could.

He tapped the button on the screen of his tablet to quieten his surroundings. When he raised his arms over his head to stretch, he shivered a little as the cold air infiltrated his lungs. He could see his warm breath as he let it out into the coldness of his room.

He moved his hand over the soft blanket, its coolness was practically begging him to stay longer in bed.

He quickly pulled his blanket to the side and got up with his trusty tablet in hand, making his way towards the control room.

The thick blanket and his pillow had been their gift to him after the first year of service. He sure was glad that he didn’t have to sleep in that terrible sleeping bag anymore. He had to continue in order to keep the gifts coming. Or the existence of the world from ceasing.

When he got to the control room, he went directly towards his coffee machine. That had been his third year gift. He had been so stoked for that as well.

Why not just a simple latte today?

He picked the capsule and put it into the machine and pressed the button. Its whirl and buzz was almost soothing as it cemented his expectation for his matinal caffeine intake. As he waited, he turned to look at the screens of data monitoring on the wall. It had taken him a few weeks to memorize the standard range for each line of data. He was glad he didn’t have to look at the notepad full of numbers that had been provided to him on his first day.

Everything seemed to be in order.

Not that he knew what any of those numbers meant. It was, as they put it, on a need to know basis.

The coffee machine stopped being noisy before it gave out a brief beep. He grabbed his coffee and went to sit at his desk as the warmth from the mug already put him in a better mood. He looked at the big screen and saw that he still had a few minutes for the countdown clock to hit the five minute mark. He hesitantly looked at his running mill, the fourth year gift, and wondered if he should run today.

He sipped his steaming coffee until the countdown timer went to five minutes and five seconds.

He opened the plastic casings of both the biometric scan pad and the big red button on his desk.

He pressed his open palm against the pad and got closer to the lone microphone jutting out of his desk.

The light turned green beside the countdown number.

He pressed the big red button and realized he was holding his breath once again.

He exhaled and sank back into his chair. In all of this time, he had somehow managed to get used to the annoying alarm, to the excruciating cold, to not having much to do during most of the day, and perhaps even to the loneliness of it all. But he never got used to that intense feeling knotting up in his stomach every time he had to press that big red button.

He took another sip of coffee before putting the plastic casings of the scan pad and the button back down into their original places. The constantly changing numbers seemed to continue in the standard range and no red lights came up. It seemed that all was well and good.

When he finished his coffee, he got up to wash his mug and heard the sound of sliding metal and faint bleep followed by a second bleep.

Had it already been another year?

He made his way to the ever locked gate and as expected, his monthly supply and the yearly gift had arrived. For the first year or so, he had tried communicating with the agent that so stealthily left him those supplies. Of course, to no avail. At least never in person.

“Thanks, Jason!” He said as he banged on the gate with his fist twice. “And merry Christmas, my man.”

He moved the food, water, and the coffee capsules to their respective places. He placed the detergent by the sink and the soap and shampoo in the bathroom. Not that he used much of the latter lately, though maybe he should.

Finally, he sat at his desk once again with this year’s gift box. It was quite small this time. When he opened it, he found a glass bottle with a golden liquid in it.

He hadn’t seen that label in a very long time and he couldn’t help but open the bottle and take a sniff. When had been the last time that he had tasted this honey liqueur? And with it, he had found a letter. The first part of the letter was that formal print he read every year.

In recognition of your ninth year of service to our planet and its people, the Bureau of Calamity Control sends you this gift as a small token of gratitude, along with the transfer of the usual sum of money to your family’s account with all the necessary discretion.

The second part was handwritten in blue ink.

I hand picked this myself. Wasn’t sure if you had these in the States, but it should keep you warm on especially cold nights.

I also sent some pictures and videos of people living their lives out there in the world. It’s not to rub it in, I promise. I just want you to know that these people can enjoy their lives thanks to you.

The writing had made indents on the thicker stock paper that he could feel when passing his finger along the words “thanks to you.” Jason must have a heavy writing hand. He sighed and opened a drawer below his desk and put the letter along with the other eight he had received along the years.

He unlocked his tablet and saw a new folder in his gallery. He figured Jason was monitoring him from nearby, because he had no internet connection, and yet they could place files they wanted him to read into his tablet whenever they wanted.

When he opened the pictures, he saw a bunch of faces he didn’t recognize. People in cafés, teenagers in a classroom, innumerous cars stuck in traffic, maybe dads walking their dogs?

His sacrifice was an important one, but the general populace was oblivious of it and he didn’t know any of them personally. He felt guilty for not feeling anything when seeing an elderly woman holding a baby. Maybe it was her first grandson, she did look quite happy, but to be completely honest, what was that to him?

Another photo showed two kids on bicycles, they seemed to be yelling joyfully at each other. It meant nothing to-

Suddenly his heart dropped as he recognized the woman in the background of that picture. It was his wife. His heart ached and he longed to see her and hold her once again. She looked good, healthy, happy even. He wondered if she had remarried after his supposed death. He had left her while she was still preg-

His eyes quickly went back to the kids in the picture to study their facial features intently. When he recognized his own eyes in that little girl, he couldn’t help but smile even as his heart shattered.

She had her brows and nose, her dimples and smile. He felt a pain in his chest like no other as he wondered what her laugh would sound like. And maybe this other kid was her best friend. Tears came down his face as he saw how beautiful and happy his little girl looked. He would have given anything to see her.

Then, he realized he had and was.

He put the bottle to his mouth and felt that sweet liquid gold burn as it went down his throat, warming his broken heart for at least this one night.

More stories from S.D. Kang and writers in Fiction and other communities.