The Apple Fell Next to the Family Tree

by Jane Palombo 11 days ago in Short Story 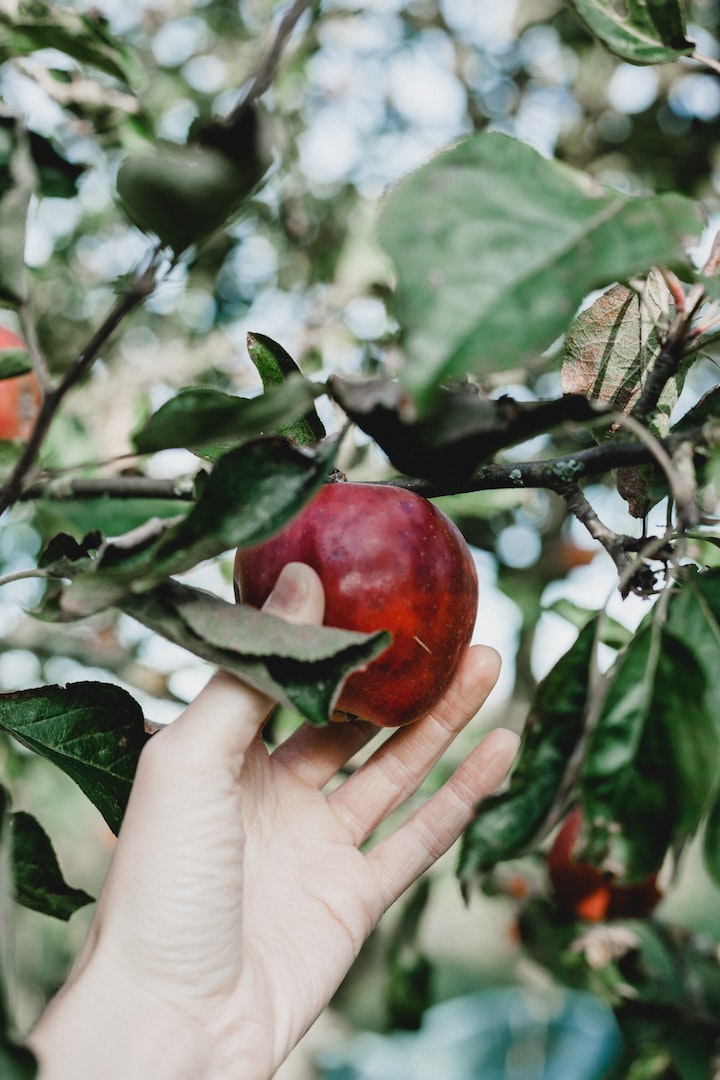 "You just can't help but get yourself in trouble." Her voice echoed in the back of my head. At night when the world is quiet and every room is too dark I made out silhouettes of my mother. Her poisonous whispers blended into my thoughts and the heartbeat I heard against my pillow.

My mother's name is Margaret Green. She hated her maiden name. Getting married to my father and taking his name is a way she got to spite her own parents. She was always scared and on edge when they visited. Every time I saw my grandpa put his arm around her, she appeared shorter. She appeared to be hiding something, or like she wanted to hide her body and disappear.

Before they died Margaret was nicer. She taught me to cook and bake. We once stayed up from five in the afternoon until midnight baking dozens of different kinds of cookies because I wanted to know what they all tasted like and she indulged me.

I don't know what overtook her. I used to think it was grief and rage. They think my grandparents were poisoned so their deaths seemed intimately unfair. She was absolutely enraged at the world. I thought she couldn't deal with her parents death. The older I got the more I realized they may have been the only thing holding her rage back.

The summer after they died, I was five, my brother was eight. One hot day he brought out a glass pan of brownies she and I made. He carried that pan, two glasses of lemonade, and his plastic hockey stick. Everything wobbled the second he walked out that door but just as he made it to the concrete patio, he lost it all and glass shattered everywhere. I was never scared of her before that day. She got up and screamed at him, smacked him across the face and told him it was because he wasn't careful. And every time she hit him, he would find me later and make sure I understood the pain. Every scar she gave him, he gave me one to keep it even.

She only ever hit me one time. I was under the sink looking for cleaning powder to vacuum the carpets. I found a white bottle and I didn't know my mother was behind me. I got my hand around the bottle and she smashed my head against the counter. She punched the side of my face and told me "You just can't help but get yourself in trouble. Do not ever touch this again." I dropped to the ground and held my hands over my face too scared to speak. I nodded my head to show I understood her.

She says it isn't her fault. She never learned anything other than this. She dropped out of high school and ran away from her parents. I blame her for knowing the pain of what she is doing to us and choosing to do it anyway.

But at a certain point I couldn't figure out if it was her fault or not. She fell off a second story porch when she was young. She got permanent frontal lobe damage. A year before her parents death she was diagnosed with a brain tumor in the back of her head. A non-cancerous mass taking up space in her head that meant she acted different from there on out. She was almost constantly in pain.

A year after the brownie incident the summer she hit my brother, she learned to use tools. She whipped his leg with a belt when he talked back. She caught him playing with fire in the backyard and broke a wooden spatula off his shoulder. They say the first thing that separated us from being savages was learning to use tools. Maybe she grew in some way.

My dad stopped her when he was home. He would see the rage in her eyes. He would send us to bed. He was the only one who could stop her and that's why she got rid of him.

When my parents separated six years ago, custody battles took them to court.

She stood in front of him and me and cried over the ways he screamed at her. It was all true. He yelled that she needed to see a therapist, she needed to stop hitting their son, she needed to do something to help her kids. Sometimes when our dad sent my brother and me upstairs we could hear them but we couldn't quite tell if they were yelling at each other or just screaming. But when they got like that, she would scream louder, she would become a maniac. Once she grabbed a knife and my father screamed at my brother and me to get into the bathroom and told us to stay there until he came to get us. The next day she had slashes along her arms and he had a bandage on his leg.

At the custody battle, I was twelve. Apparently that is too young an age.

My brother went on the stand when he was fifteen. He showed the scars on his back from the spatulas being broken against his skin. He showed small scars on his shoulder from where nails would pinch skin until it was torn apart. None of the scars were from our father. But he told them they were. I turned to see my dad’s eyes filled with tears. I never saw him cry before.

“How could you?” He barely got the words out.

She never wore make up and yet, her tears carried black ink down her face. She wiped it away with the handful of crumpled tissues she carried for show. She got just what she wanted. He paid a fine, he lost all custody and any legal rights.

I watched her win. She always won.

Six years passed. My mother stopped hitting my brother after the custody battle. He lied for her which means she owed him. It guaranteed his safety from her.

I turned eighteen in one month. My brother was twenty-one. A week ago my mother answered the phone and turned to my brother and me. She said it was a hit and run, the police didn't have a video and there were no witnesses but they were still searching for a suspect. Our father died a week ago.

My brother rolled his eyes. I thought he might have actually believed everything he said at the trial. She hasn't hit him since. He's become her accomplice.

This morning I sat in the kitchen making chocolate cake batter. It was an old family recipe my mother taught me when I was young. She always said I made it wrong.

She marched into the kitchen and started her shit again. "It hurts my heart that you and your brother don't get along. You need to forgive your brother, not for him, for you."

"After your father's passing, I think it's more important now than ever to figure out what family means to you Alexandria."

"It's Alex." I said not lifting my eyes from the mixing bowl.

Sometimes I pitied my brother for having to choose to be her accomplice at such a young age. I thought maybe he didn't understand, and then I remember they are incredibly similar. He knew what he was doing and he knew what he would get.

Maybe I heard her voice in the back of my head and I am running on auto-pilot, maybe I know exactly what I'm doing.

"Do you even care about what happened?" I said dramatically dropping my mixing spoon into my bowl.

Her hand came up to her chest and she gasped like the phonies do at surprise parties. "Of course I am upset about your father, Alexandria."

I decided not to dignify her to a response.

"You better try to help heal this family, or else you will end up miserable and alone just like your father did." She said with an evil twist on the right corner of her mouth. Her eyebrows raised with a matter of fact-ness that concerned me. "Are you going to join your brother and me for lunch? Or are you too busy? " She said side-eyeing my cake batter.

"Sure. Give me a minute, I have a few more ingredients to add." She stuck her finger into my batter and tasted it. I froze not knowing what to say to her. She decided to speak for both of us. "You need more sugar and milk, you used too much cocoa powder." I stared down at my fists and did not look up to her. I listened and heard her feat stomp her way out of the kitchen.

She thought telling me I would be alone was a threat. That was a gift.

After staring at the kitchen ceiling for two hours. My cake was finished baking and cool enough to put icing on it. I hadn't felt that good since I was last with my dad. Something about the promise of hope and a better tomorrow filled my blood. For the first time ever, my blood boiled from rage and instead of it tearing me down, it gave me life.

I served my mother a sweet piece of her chocolate cake first. "Taste it for me, tell me if I got it right this time." She grabbed the fork and smiled. Not only did I happily serve her food, I gave her the opportunity to insult me on a platter. "Too dry." She says, and I dropped my smile. "It isn't horrible." she mentioned while taking another bite. My brother took the piece I set in front of him. He grabbed it and after taking a piece with his fork, right before it entered his mouth, my mother whispered, "What do you say to your sister?"

"Thanks." He said less than half heartedly. If there was a way to say fuck you while saying thank you, he had mastered it. He and my mother finished their entire piece of cake.

It happened faster than I ever imagined.

'You'll be alone' she threatened me. That set me free. I wanted more than anything to be alone forevermore. I finally understood my mother. Since being a part of this family, my brother has always been just like her, cruel and mean. He was sadistic like her. But he wasn't evil like her. I got that gene. The two of them dropped to the floor and they convulsed for a moment and she turned to me with her eyebrows strained inwards like she had been thinking of something troubling. Then she smiled, and she stopped moving. Eventually he did too.

I never felt power once in my life, now I got it. I had the power then. Her smile was the last thing she could do to spite me. I poisoned her, and her smile poisoned me. I understood her and I became her. She still won.

Turns out I am much more like her than I ever thought. She's always been right, I can't help but get myself into trouble.

A recent college graduate but a life long learner. I don't know anything but I want to learn everything. I write stuff sometimes.

See all posts by Jane Palombo →