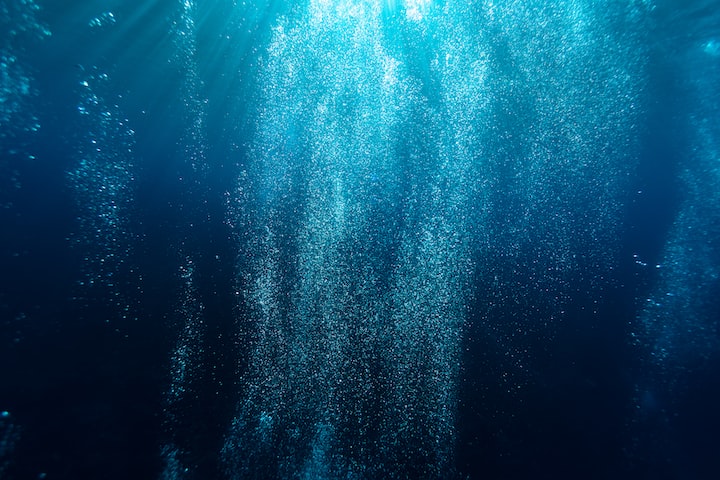 Photo by Sarah Lee on Unsplash

Slipping into the water, from the charter boat, anchored off Bracebridge, Ontario, into the Muskoka Lake down the mooring line, into the dark depths below, Graham descended. Hand over hand, as gracefully as possible, with 36 pounds of lead strapped to his waist onto this weight belt and another 4 pounds of lead in 2 pound ankle weights each at the bottom of each leg.

Down he went, sucking breaths of compressed air from his SCUBA tank, as he fought to maintain some semblance of buoyancy. Alternating small presses on the inflator on his buoyancy compensator (BCD) and dry suit chest inflator did nothing at first to stop his rapid descent. After a couple minutes, his descent quickened as the pressure at depth compressed the volume of both BCD and dry suit. Longer presses of both BCD and dry suit inflators soon slowed the descent as he neared bottom some 30 meters below the surface.

Coming to rest on the fore deck of the wreck, he took stock of his depth and air gauges, including a quick compass bearing. Thirty (30) meters on the deck was the equivalent of four atmospheres of pressure. With only 2500 psi in his aluminum 80 cubic foot tank remaining, Graham calculated quickly - based on his known breathing rate - how much time he had remaining at depth. Even given the Dive Tables instructions for maximum time at depth, he knew he had lots of air to spare. Resting now a quick moment, he then set out to the aft of the wreck where the remaining class of Advanced Divers would continue their training.

Once joining the group on the aft deck of the wreck, Graham set about circumnavigating the semi-circle group of students, checking upon each, one-by-one, for signs of panic in their eyes through their masks. Looking for increased breathing rates of the students by the sign of increased inhalations and exhalations was easy. All that was required was to take time to see how fast each student was exhaling their long stream of air bubbles from their regulators that ascended to the surface above. His own breathing rate was long and deep, as should each students be.

This group of six students was the first to arrive with their Divemaster escort. The Master SCUBA Instructor followed close behind the students during their descent from the surface since typically two escorts were required by training standards to be with the students at all times. Graham was simply to be the back-up Divemaster acting in a Rescue capacity should he be needed. The next group of six students were waiting on the charter boat with another Divemaster and Assistant Instructor, and another Divemaster to follow like Graham. The class total of twelve students had been equally divided amongst the training staff for this Deep Dive training session in the cold water depths of this lake for this July long weekend.

Graham signaled "okay" to each of the students he'd just beckoned, and after receiving the reply "okay" then signaled his own air gauge with his heavily gloved hand and pointed at each student. Graham's gauge had shown 1700 psi, dropping 1000 within the span of 15 minutes. Each student held their gauge looking down at their own. Graham noticed a look of bewilderment on one of the students with him. He signaled both to lift their gauge consoles upright for him to read.

It was then that Graham saw the students would have to cut their remaining time at depth short and not poke about the wreck. For it seemed of the two students with him, each had much different air remaining on their gauges. Student "One" displayed 1100 which was to be typically expected for an average, inexperienced diver at this depth. Student "Two," however, was now down to 600 psi in their tank at which point Graham had that sinking feeling. Both still had to ascend at a limited rate. That limited rate was known all too well to all three in order to avoid possible embolism and perish in the water.

Then, suddenly, "Two," decided to bolt. Luckily for Graham and himself, he bolted for the fore deck where the line to the surface was located. That was the deciding factor in what would then occur. Graham signaled "One" to accompany him to the fore deck as quickly as possible with long strong strokes of their fins strapped to their booted feet.

Arriving at the line to the surface, near as fast as "Two" had tried, Graham took a hold on the student and held him in position before giving the signal to both to ascend, all three together, surrounding the ascent line looking upon one another.

The typical myth of watching one's air bubbles rise to the surface was ignored by Graham, the more experienced of the three, as was the suggested rate of 60 feet per minute. He could tell that both "One" and "Two" were watching their bubbles though and he did his best to slow each down as they rose to the surface. Yes, the ascent line was marked - not so much by color since that'd not be of use at the darker depths where light didn't penetrate so well.

Instead, the ascent line was marked by wrappings at every 3 meters, an average of 10 feet per section marked. From 30 meters, that's 10 sections of line to the surface or 100 feet. Graham knew for any SCUBA diver to avoid medical injury the best rate of ascent was 30 feet per minute. It would take them all 3 minutes and 20 seconds to reach the surface.

At the twenty meter mark (in fresh water), Graham signaled One and Two to stop briefly and display their air gauge to him. They should have all been watching their gauge consoles during the ascent but only Graham and One were performing such a task. It seemed like Two was hell bent for the surface and it took Graham much restraint to keep him in check.

When they left bottom at the 17 minute mark, Graham's air remaining was 1600 psi because of the hurried swim to the ascent line. Now at 20 meters his air was showing 1500 psi. One indicated by displaying their gauge that of the 1100 psi seen before, there was now 950. One seems a candidate for experienced dive training, Graham thinks. Two, however, displays 350 psi and is showing signs of desperation since he last saw 600 psi.

Upwards they ascend, Graham holding onto Two, knowing the situation can become critical at any moment not knowing if Two will bolt completely for the surface or completely suck his compressed air tank dry.

Only another 2 minutes and 20 seconds. The timer keeps dwindling down.

At least now, not having to worry about complete bottom time since depth is decreasing, time at depth is increasing and providing a greater asset at this point. The only disadvantage currently is Two's remaining air.

Graham tries everything within his training to calm Two's breathing rate but it's to no avail. At least when they arrive at the 10 meter line mark and Graham has them all stop, and check and display their air gauges that Two is now starting to mellow.

One minute has passed between their last air check and Graham's air is now 1450 psi. One's remaining air, as the gauge console is displayed to Graham shows 800 psi. Two looks surprised when displaying 200 psi on their air gauge. But still Graham wonders if Two may suck their air dry with 1 minute and 20 seconds left until the surface. Well, should it come to it, Graham knows his extra second stage is available hanging from the front of his BCD by its quick mouth-piece grommet clip.

All three continue ascend at the rate Graham restrains them all at - 30 feet per minute and no more. At the 5 meter mark, Graham has each student exhaust another portion of their air from BCDs - neither is wearing dry suits so no worries in complicating for themselves. Taking stock of each of the students, and their overall demeanor in the water, not bothering to check air gauges, he retains a firm grasp on Two as they ascend to the surface at the rate Graham sets going up the line.

Graham reaches from the 5 meter mark on the ascent line to the 4 meter mark, then to the 3 meter mark, the 2, and finally the 1 meter mark before slowly breaking the surface and inflating his BCD completely to steady him while lifts Two to the surface who spits out their regulator shouting "Air!"

Graham then reaches across to Two and presses their BCD inflator valve inflating it fully. "See, lots of air!"

More stories from Graham Cooke and writers in Fiction and other communities.