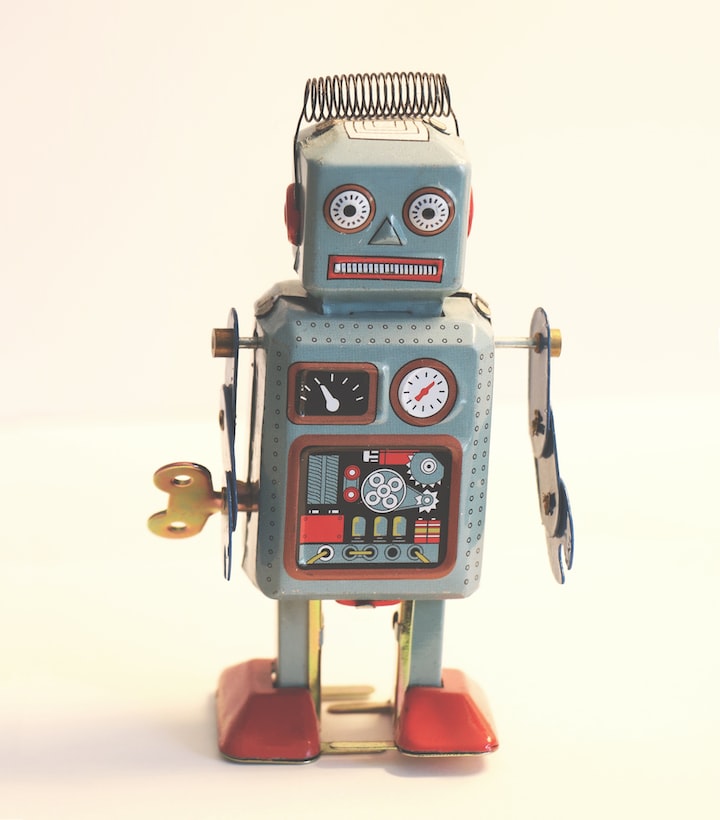 Image by Ofdj125gk87 on PixabayIt was 2053. The aliens were here. Concrete jungles were all that was seen far and wide. Dead bodies scattered the area from a virus that had wiped out the invasive human species, leaving corpses scattered across the barren planet but the alien king, Aldwald, had found a way to "revive" them: He had put a chip in each one and used a remote so, really, he'd made robots out of corpses. He had stuffed each body so that it was perfectly preserved, like people had once taxidermied animals. Was it sick or was it innovative? It depended who you asked. The wealthy folks liked them: They did housework, gardening, and errands. They could drive, although that was a bit of a hassle: You'd always have to keep a close eye on them, so really, it was easier to drive yourself.

The poor people really didn't appreciate these strange contraptions. They found them repulsive, for one, because the robots of sorts were not actually alive. They also found them downright boring because they didn't talk unless someone told them what to say through the speaker on the remote: it was quite an advanced system. The scientists had outdone themselves once again, even though they really didn't need to, and, mainly, their issue was that these robotic post-humans had taken all of the available jobs that they needed in order to survive: waiting tables, cashiering, mining, oil rig work. Literally everything.

There was an old man by the name of Ethan. He was a Christian minister who no longer had a soul on earth to preach to. When the humans had gone extinct, religion had to, but, by some miracle, Ethan had survived. The aliens didn't know that he was the only human left and he wasn't about to tell them so.

He stayed on the outskirts of this odd civilization for a week or so, living on everything he'd managed to save on the night of the mass extinction, but he soon made his way through it. He knew that he would have to find his way into this civilization. He knew that he was happy with the way things were before all of this nonsense took place. He'd lost his wife and his children. They had been out on the town the night it had happened. He'd stayed alone and cried himself to sleep, wishing it was him who had gone first. Not her.

He walked into the city of Masacross with his cane in hand and asked to talk to the alien king, Aldwald. The soldiers eyed him suspiciously. Each alien soldier had a red mark on his forehead and green skin. They tried to use the remote on him because he looked like the robots, but they could not. He explained that he was the last living human.

They whispered amongst each other and Ethan couldn't make out much of what they said. Something about King Aldwald, the last human, and imprisonment. He wasn't sure if they were referring to him, so he asked, but they told him that this information was confidential. He frowned with confusion and disappointment, but followed them into the city nonetheless. He didn't have much of a choice if he wanted to eat. There were no animals left and there was no foliage, no vegetables. Everything was created in the Lab in Masacross and he'd eaten every last bit of what he had before the mass extinction took place. Literally every square foot was concrete. The sky was merely grey. He could no longer make out the stars because there was only a heavy layer of smog no matter where he looked.

Finally, Ethan arrived at Aldwald's palace. The soldiers left and he made his way in. There was his wife. She was a servant. She spoke but it was in someone else's voice. The Queen, Esmeralda, was speaking through her through a speaker on what looked like a remote. He sighed. A moment of false hope had flashed through his mind, before he'd remembered that these "people" weren't actually humans that were alive, they were simply reprogrammed corpses who'd been stuffed to look like pretty dolls. He would never get his wife back. He thought to himself that this had gone too far: using corpses for the convenience and innovation that comes with productivity and knowledge instead of giving them a proper Christian burial, but his voice was caught in his throat. He couldn't say a word until he ate. He needed food. He was skin and bones, he realized, as he glanced down at his malnourished arms. He bowed to the queen and she curtsied.

"I will lead you to the king's chambers," she said.

Finally, he saw the alien king himself: Aldwald. He was sitting not on one throne but on three. Each one was made of what looked like…diamonds. He was about fifty feet in the air, which reminded Ethan of the way that Christian ministers had abused the power that they had once had over their followers in the Catholic church in Venice. He had always had a problem with this sort of dynamic. He believed that it was a breeding ground for corruption. He bowed nonetheless, not wanting to become one of the robots himself. He knew they had been reused and not killed, but he still wondered where the line was with these evil geniuses.

"We can use another robot. This is the system, sir."

He didn't even bother to ask the man's name.

"Now, 1, 4, and 6, take him out of my palace! Let him roam this beautiful city and follow him. Then, when he does, put this into his forehead."

He ordered his servants to bring the chip and the remote.

"Assign him to be a talking head for the politicians. He is old and white. He has credibility. We need more with all of the immigrants coming in. The Martians have always had it out for us and you know it. As soon as we break new ground and take over this planet, they always get greedy. We must be prepared for the invasion."

"Your majesty," Ethan said, "What if I preached? What if I gave a sermon?"

"About what? Morality? My subjects do not need to know that what they are doing is wrong! Their ignorance about it is what's keeping my city running. Now leave!"

Ethan gradually starved to death and the aliens followed him, watching as he did. Then they put the chip in him and programmed the old man to become a talking head. The televisions across the city continued announcing that they should be prepared for a Martian invasion any second, and Ethan became the head these alien newscasters used to deliver this information. They were too busy lining their pockets and telling the other aliens about the amazing weapons in the Line of Defense Superstore to be on television.