by Test 2 months ago in Sci Fi
Report Story

Our hunting team was divided into several groups, and with the help of the hunting dogs, we forced 70 to 80 antelopes to the heartbreak cliff on Mt. 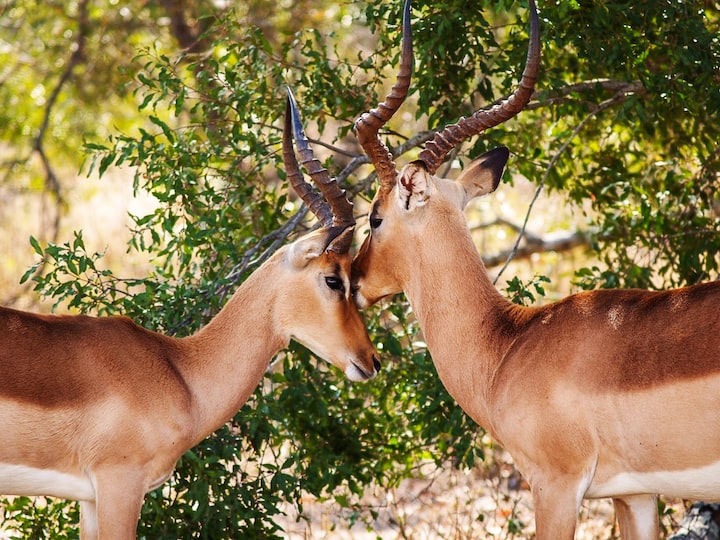 Our hunting team was divided into several groups, and with the help of the hunting dogs, we forced 70 to 80 antelopes to the heartbreak cliff on Mt.

The two peaks across the river are about six meters apart, and both of them are straight walls. Although the gazelles have four-meter long legs with well-developed tendons and are very good at jumping, they are the champion of the long jump among herbivores, but just like people have limits for long jump, on the same level, the robust male gazelles can only jump five meters at most, and the female, young and old gazelles can only jump about four meters.

At first, the antelopes found themselves in a desperate situation, panicking and jumping randomly. There was an old gazelle who didn't know whether it was because he was too old to measure the distance or because he wanted to show off his ability.

After a while, the gazelle herd gradually quieted down, and all eyes were focused on a particularly tall, dark brown, oily male gazelle, who seemed to be waiting for the male gazelle to come up with a good way to save the entire population from extinction. This male was undoubtedly the leader of the herd, with horns like two scythes on his head. The scythe-headed sheep solemnly looked around the cliff, looked up at the blue sky after the rain, and bleated sadly, indicating that there was nothing he could do.

The herd of gazelles stirred again. At that moment, a rainbow suddenly appeared in the rain-washed sky, one end connected to the sad cliff, and the other end flew over the mountain stream, connected to the opposite mountain peak as if a beautiful sky bridge had suddenly been built. The gazelle gazed at the rainbow, and one female gazelle, a gray-black one, walked towards the rainbow in a trance-like state as if she had entered some kind of hallucination. Perhaps they were nervous and mistook the illusory rainbow for a real bridge to the other side of life.

The gray and black female antelope's body was already covered in a dazzling band of rainbow light, and she was about to step into the abyss when suddenly the sickle-headed sheep roared "baa-baa", a cry very different from the usual sheep I hear. The tone of voice, although also maintains the usual calmness of the sheep, but pensive and powerful, revealing a certain unwavering determination.

With the roar of the scythe-headed sheep, the gray and black female gazelle woke up like a dream and retreated from the edge of the cliff.

At that moment, I saw that a male antelope came out from the old group. The male bleated at the young antelope and a half-grown antelope came out in response. Suddenly, the half-grown gazelle darted forward, and at the same time, the old gazelle also started to run quickly. The angle of the half-great gazelle was a little bit higher, and the old gazelle was a little bit lower. I was amazed. What, do young and old have to form pairs to kill themselves? This half-grown gazelle and this old gazelle could never jump to the opposite cliff unless they put on their wings! Suddenly, a shot that I never dreamed of appeared. The old gazelle, with its skillful jumping, appeared under the hooves of the half-great gazelle when it was descending from the highest point. It was like two spaceships docking in the air. The four hooves of the old gazelle stomped on the broad and strong back of the old gazelle as if it was on a springboard, and it jumped again in the air. The old gazelle was like a rocket shell that had run out of fuel and automatically broke away from the spacecraft, no, it was more miserable than the rocket shell, and it fell straight down like a bird with a broken wing under the vigorous kick of the half-sized gazelle. The second jump was not as strong as the first only half the height of the ground jump, but it was enough to cover the last two meters of the journey. In an instant, the half-great gazelle landed lightly on the opposite peak, bleated excitedly, and disappeared behind the rock.

The jump was successful, followed by a pair of gazelles leaping into the air, drawing a dazzling arc over the mountain stream, each young gazelle's success meant an older one fell to pieces.

Over the mountain stream, parallel to the rainbow, another bridge was built, a bridge built with death as a pier. There was no crowding, no jostling, orderly and fast flying. I paid close attention to the old antelopes that were destined to die, thinking that maybe some of them would sneak from the doomed ones to the new ones, but what shocked me was that from the beginning to the end, none of the old antelopes switched places.

They willingly gave their lives to open a path for the next generation to survive.

Most of the old gazelles used their excellent jumping skills to help the young ones to fly safely to the peaks on the other side of the mountain, but there was only one aging female gazelle, who was probably too weak to let the young ones step on her back when she was connecting with a young one in the air, and the old one fell into the abyss together.

At the end of the sad cliff, only the scythe-headed sheep, who had successfully commanded the group of gazelles to fly across en masse, remained. The scythe-headed sheep stood alone on the peak of the mountain, with no young antelope to make it an aerial stepping stone to the other side and no one to help it fly. With a firm step, it walked towards the gorgeous rainbow. The curved rainbow was connected to the sad cliff at one end and the mountain peak on the other side, like a beautiful bridge.

It went up and disappeared in splendor.