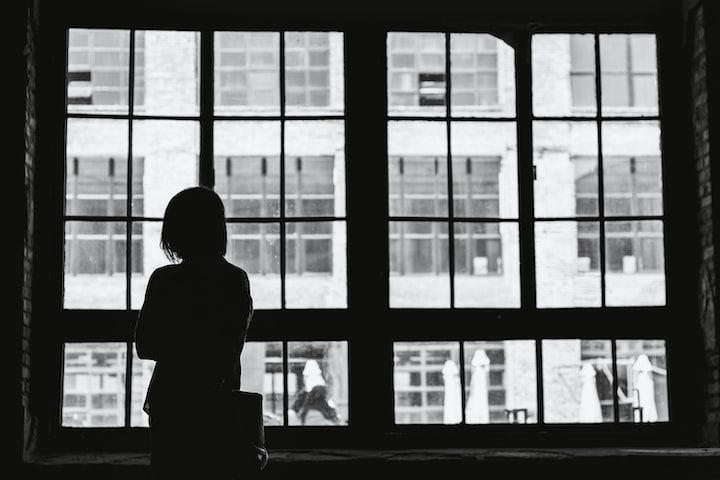 Photo by Alex Ivashenko on Unsplash

Allie Jo Cutler stared at her reflection in the mirror and slowly began to accept the truth. She was never going to master the smoky eye look. Whenever she tried, she always seemed to look either like she had a black eye or like she hadn't slept in a week. This time was no different. The sexy, smoldering look had eluded her again. Frustrated, she threw the magazine that she had been using for guidance into the trash can and, for the second time that morning, pulled out her eye makeup remover. She was going to be late, again.

When Allie finally arrived at work, Greta, Allie’s curly redheaded and rather plump cubicle-mate, was drumming her fingers angrily on the desk.

Allie turned to look at Greta. “Sad ones?”

“Yeah, I’m listening to Olivia Rodrigo, and they’re all ‘my boyfriend dumped me and got a new girlfriend,’ and I’m sick of it.” Greta sighed heavily. “Where are the songs about ‘my heart is broken because he didn’t love me back and didn’t want to date me’? That’s the kind of song I need.”

“Is this about Bruce in accounting?”

Greta rolled her eyes. “Well, of course, it is about Bruce in accounting.”

Allie knew better than to get Greta started on the topic of Bruce. She had spent too many days with Greta googling “how to get over a breakup when you were never together” and “how do you mourn something that never was.” Whenever Allie tried to argue that Greta’s situation was basically the premise of the “He’s Just Not that Into You” film, Greta responded that, no, this was quite different – this was Love (with a capital L). So, instead of heading once more unto the breach with Greta after she was already late, Allie swiveled her chair to face her computer and picked up her headset to get to work, but not before she made a mental note of the time: 9:43. That meant ten hours and seventeen minutes. She could make it.

Ten hours and eleven minutes later, Allie strolled into Two Forks, an up-and-coming Italian restaurant about ten blocks from her apartment. She was meeting Jeff Peters. Allie had known Jeff for exactly five months. They had met at a party thrown by a mutual friend, and Allie had felt an immediate connection to him. They liked many of the same things, but they each had their own interests, too, so it never got boring. They laughed together – sometimes at each other but, even then, with each other. Allie felt an ease and a comfort with Jeff that she had never experienced before.

“It’s like coming home,” she had told her friend, Maggie.

“It’s infatuation,” Maggie had responded. Maggie was a cynic.

“I’ll give you that he’s probably high on the compatibility scale, but there’s no such thing as soulmates.”

Allie sighed, and Maggie continued, “Look, if he’s your soulmate, then why aren’t you dating?”

It was true. Allie and Jeff had spent an inordinate amount of time together since meeting five months ago, but it had remained platonic. There was flirting, frequent, subtle touches – all of it – but, at the end of every day, Allie went home alone to her apartment. In her dreams, though – well, in her dreams, there was no parting at the end of the evening.

“Hey, Als!” Allie heard her name and saw Jeff sitting at a booth in the corner. She walked over and slid into the seat across from him. He must have arrived early because drinks were already on the table. He knows my drink order, she thought and smiled.

“Well, I’m contemplating Cheez-Its. Have you ever had one? I had the unfortunate experience of eating one today. My three-year-old niece insisted and what was I to do? But, let me tell you – it was awful. I think I can still taste it.” Jeff took a sip of his drink and smacked his lips together. “Yeah, it’s still there. I’m starting to think it might never go away.”

Allie laughed and brushed her hair away from her face. And, so, it began.

Allie did not consider herself a romantic. Or at least she hadn’t – until she met Jeff. But being around him had softened her. Across the table, Jeff’s eyes danced as he regaled her with stories of the hijinks from his college days. Every once in a while, a slight dimple formed on his left cheek, and then – as if it were shy – the dimple disappeared just as quickly.

This is the purest, truest Love I have ever known, Allie thought to herself. Love with a capital L.

Jeff rolled his eyes because Allie had told him all about the Great Bruce Dilemma. “Of course! What was it today?”

“A breakup song before anyone got together?”

“It doesn’t make sense, does it?” Then Allie added, almost to herself, “Sad Love songs.”

“It must be getting almost painful to watch – poor Greta pining away over some guy who’s clearly clueless about how she feels.”

“She just needs to meet someone else to take her mind off Bruce.”

“That would mean taking her mind off Bruce long enough to notice someone else.”

Jeff chuckled. “Man, I’ve gotta see this guy some time. He must be . . ." Jeff paused and considered, "well, spectacular!”

Allie laughed and took a sip of her drink. And then it happened.

Jeff pulled out his phone. “Als, I’ve got to get your opinion on something.” Allie was pleased; she loved when Jeff wanted her opinion.

Jeff held out his phone for her to see. “I’m trying to pick a suit for next weekend. So, there’s this one – the traditional navy.” He pulled the phone back and sifted through his photos and held it back for Allie to see again. “Or this one.” Allie was faced with a picture of a camel-colored suit that featured a subtle herringbone pattern. “I know this one,” Jeff began, indicating the camel-colored suit, “is a little more ‘out there.’” Jeff used air quotes. “But I think it’s just sort of . . . me, ya know?”

Allie did know, and she agreed. “If that’s the one you like, I think it’s great.” Allie took another sip of her drink. Her mind played through what Jeff’s plans may be. She considered that they may involve her, since he was asking her opinion of his outfit. Nonchalantly, she asked, “What’s next weekend?”

“Carolina,” Jeff replied, and the dimple appeared for an instant.

Allie was puzzled. “North or South?”

“No, no,” Jeff laughed. “Carolina Winston. She was my high school girlfriend.” Allie felt her stomach clench. “She’s coming to town – moving here actually.” Jeff’s eyes widened momentarily. “And she looked me up on Facebook. It’s weird because you know I hate Facebook. They should call it Fakebook.” He winked at Allie. “But I guess the social media giant worked out in my favor this time.”

Allie was conscious that her breathing had slowed. “So, you’re meeting up with her?” Of course, Allie already knew the answer. But, with her depleted oxygen level, it was as if her voice was just filling the silence – trying to let her brain, or more aptly her heart, catch up.

“Yeah, I’m taking her to dinner and a show.” Jeff looked up and to the left as he indulged in memory. “We were really great in high school, but we broke up when she went to school on the West Coast and I came to the City. We tried to keep up for a while, but you know life.” Jeff shrugged. “I always missed her, you know? Things with her just felt right somehow. Like I just knew.” Jeff smiled and dimpled once again. “You ever felt that?”

All Allie could do was nod.

Thankfully, the entrees arrived moments later, and a discussion of Two Forks’ marinara sauce ensued – Carolina and the camel-colored suit dislodged from conversation.

As was their practice, following the meal, Jeff walked Allie to her apartment. Along the way, they engaged in the decades-old debate of Dawson versus Pacey. When they reached the stairs leading to Allie’s apartment, Jeff finally admitted defeat.

“Alright, Als, you win. He isn’t a hapless screw-up.” He gave her a wink and then looked down at his watch. “I’d better get going.”

“Yeah,” she said, trying to keep her poise. “Have a good night.”

Jeff turned and started down the street to his own apartment – a farewell Allie had endured all too frequently. Near the lamppost, he stopped, turned to her, and said, “Hey, see you later, alligator!” For the past few weeks, it had been their nightly sign off from whatever conversation they had been having.

Allie mustered all the jovialness she could and responded, “After a while, crocodile!” Then, she turned and went into her apartment, once again, alone. Spectacularly clueless, she thought, though she wasn’t sure if she was referring to Jeff or to herself.

The next morning, Allie’s eyes were swollen. Though she was loathe to admit it, she had cried herself to sleep. How cliché, she thought. Staring at her puffy eyelids, Allie decided there was only one thing to do. She reached into the trash can and retrieved the magazine that claimed, “The Smoky Eye is for Anyone!” Here we go again.

Forty-five minutes later, Allie plopped into her chair in her cubicle. Next to her, Greta was eating a jelly donut.

“Yeah,” Allie said, while entering the keystrokes to log into her computer. “I’m trying something new.”

Allie turned and smiled. “Thanks, Gret.” Allie paused and then said, “You know what, Gret, we should write it.”

Greta took a bite of donut and considered. “Yeah, I don’t think people will want to listen to that. Like a sad love song?”

“But,” Allie shook her head, “just yesterday, you said . . . .” Allie stared at Greta waiting for some sort of spark of recognition. “You know, the whole deal with Bruce.”

At that, Greta’s eyes widened. “Oh, yeah! It’s tonight! I’m so excited!” Greta started bouncing up and down slightly in her chair. Allie heard the chair squeak and hoped it could withstand Greta’s enthusiasm.

Greta took on a deep MMA-announcer voice and bellowed, “My date with Bruce!” Greta found herself hilarious. Then, suddenly, the laughter stopped, and Greta looked at the calorie-laden donut as if it were a snake and threw the rest of it into the trash can.

“He asked me out yesterday! I told you! Were you not listening to me under that headset?” Greta shook her finger at Allie. “We’re going to that new restaurant – Three Forks or something.” Greta had a sly smile.

Greta shrugged, and then her phone rang. Greta turned to answer the phone. Allie sighed, turned back to her work station, and put on her headset. She opened a Word document on her computer. She stared at the blank page and started thinking about the lyrics to a song – a sad, unrequited love song for the ages.

More stories from amy miller and writers in Fiction and other communities.