A Song Based on a Song 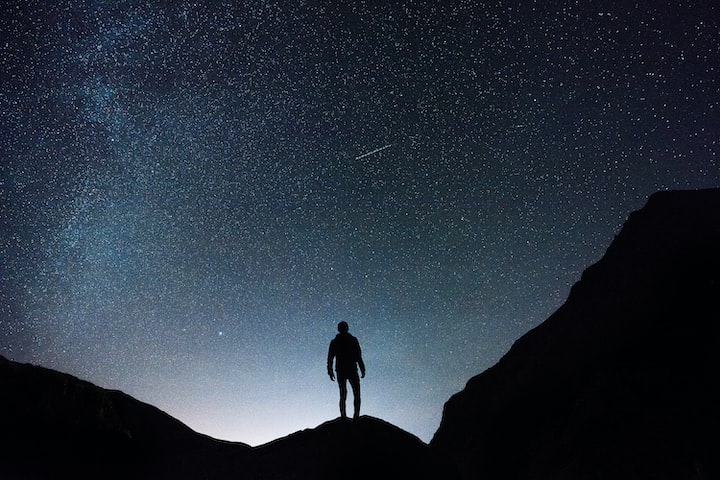 I wasn't always a cenile old man in a nursing home. I was a respected scientist. But ya know, sometimes I wonder. Was I always cenile?

I remember i was laying in my bed and this humming noise barely woke me. A dim little light shined through my room and next thing i knew i was ripped from my bed and inside a weird sciencie room. I wasn’t scared. Just confused. I was stuck with some needles and blood was being drawn. I was stripped naked and moved from room to room.

“Hey. If you’re gonna shove that in my ass, at LEAST buy me dinner first,”

“We are not here to ‘shove it up your ass,’ as you would say. We are testing to make sure you're not one of them,” I heard inside my head. I never got used to the way they talked

“WHOA!!! How about we work on communication starting with finding a different way to do it?”

“Our tonal communication methods you wont like. You might hear them but you won’t understand nor enjoy the pitch,”

“Figures. So about dinner?”

After feasting on a liquid that tasted better than any ribeye I’ve ever had, they sat me down in a room.

“You have been chosen. You exhibit exemplary qualities in a mere human. That is why we will teach you.”

He reached out and palmed my forehead and suddenly I wasn't in a spaceship. Suddenly I was floating through… a brain? It was like my body was the spaceship and his brain was… ah forget it. You wouldn’t understand. Anyway, I saw the extinction of the dinosaurs. I saw the creation of the Easter Island Heads. I discovered fire. It was a nice touch I thought.

I came back to reality kicking and screaming and crying. The transitional periods left something to be desired.

“He’s not ready,” the one that palmed my head said. “He’s close but he’s not ready.” The humanoid faced me and spoke. “You mustn’t mention this to anyone as it was only a dream. Silly human. Let me get that probe we were talking about. You’re abduction is only just begun.”

I woke up back in the same position I had fallen asleep in. “What a kooky dream,” I thought to myself as I went about my day. Back then I was working on a military base. Testing toxicity of chemicals, testing hair growth hormones on mice, testing this and testing that. Every once in a while I ate and shit and went back to testing. I felt like there was something missing after that dream. But money is money and I could only afford to not work for so long so I didn’t miss a beat.

A few days later sleeping like normal I saw the same strange light. Recognizing the dream I sat up and tried to get away from it. To no avail obviously. They’re freaking aliens. Once again I was pulled into the spaceship, made the same smart remark about probing, and once again was fed information through the palm of an alien.

This time I saw the present but… in places I had never been. I watched the making of nuclear weapons. I watched the assassination of a great president from the perspective of someone who was so happy he was doing ok after the troubles he had gone through. I felt someone be hungry for the last time as they starved to death. It was hard. Even coming back this time was a lot less horrifying than what I had just seen and experienced. I sobbed in the chair.

“Those are the horrors of your world. This is why we come. We want to help,” the being spoke. “He’s not ready yet. He’s making steady progress. He will be ready soon. Good night my sweet little human. It’s time for the probe again,”

I woke up in a cold sweat that time. If this was a dream… why’d the alien say… again. Work was awful. I had to really button down. Test this. Scan that. Fax those. Poop. Eat. Test. Something caught my eye that day. I don’t know why I had never seen it before. There was a poster in the room where I sent the faxes day in and day out. It read “Keep up the good work. You’re a major cog in the machine of this company.” A cog in the machine. I HATED the phrasing. It haunted me from that day on.

I woke to the light. This time I wasn’t scared. This time I was hoping I was ready. I walked toward the light and went into the ship. I made no probe remarks. I sat and waited for them to palm me. I wasn’t palmed. The alien spoke to me. “You’ve made incredible progress. We need one more thing from you. It is incredible what you’ve been capable of in the short span of a month my friend. I promise you will be ready soon. Are you ready for your therapy today?”

“Therapy? Yea. Yea lets do this.” I saw a future. That utopia… I… I thought it was heaven. All fruits grew on the same trees. There were flowers in colors I had never seen before. Everyone was speaking to each other the way the aliens spoke. But they looked… like us. Like humans. That’s when I realized. This wasn’t a distant future or even an alternate reality. This was the missing link. They weren’t aliens at all. They were evolved humans.

Coming back was hard again. This time for a different reason. I didn’t want to leave. Upon landing back home I kept trying to think of ways to get us there. I couldn’t stand it. Not being in the utopia was killing me. When I awoke organically I thought “I have to tell everyone. If I explain to everyone what I’ve seen in detail… I’m a scientist. They have to believe me. Right?”

I told everyone that would listen and far more than that wouldn’t for that matter. People heard me talking and they’d say stuff like “Man those lab fumes are gettin’ to ya huh?” It was so infuriating. I just wanted what was best for them. I would talk to the aliens the next chance I got. I would convince them to show themselves so we could work towards the perfect home. Our perfect world. I wouldn’t get another chance. I’d continue my crusade without them. It fell to deaf ears over and over until I lost my job. I had become a legal liability as everyone associated my face and my “strange notions,” with my lab.

I’ve published books, you know. I’ve saved lives with the discoveries I made. It’s not even upsetting that they didn’t believe me though. It honestly hurts more that the aliens didn’t come back. It’s kind of crazy to me. They said I was so close. Why would they abandon hope? Was it because I talked about them? I couldn’t hope to understand. You know… I still hear them sometimes, all alone in this little cabin. 15 years later and I can see that utopia in my mind. Crystal clear. Pristine. “Who knows. Maybe someday they’ll come back,” I keep lying to myself. Maybe someday I’ll be ready.

Howdy! I’ve been writing for about 9 years now. Everything from plays to graphic novels to short stories to haiku’s about hating retail. Thanks for the support! Feel free to follow me on social media. Enjoy

More stories from Jose Sanchez and writers in Fiction and other communities.