by Janet Thorley 10 months ago in Horror
Report Story 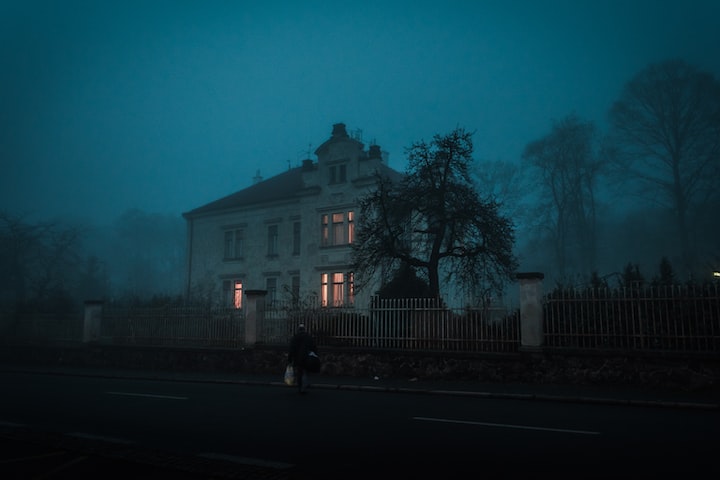 The inspiration for this short story came from the Reedsy Prompts weekly story competition. The prompt was 'Set your story in a countryside house that was filled with shadows'. As my usual genre is romance, I am using the prompts to help me move away from the norm and challenge myself. I hope you enjoy it.

The car shuddered to a halt and Paul pulled up the handbrake before turning and tapping her, ‘Clara, we’ve broken down.’ he said.

She shoved his hand away and shifted in the seat, needing to relieve the ache in her back.

‘Clara...’ He switched on the interior light.

‘What…’ Now, upright, she flung her arm across her eyes to block out the glow. ‘What the hell?’ she grumbled.

‘We’ve broken down.’ he repeated.

‘Where are we?’ she peered through the glass and greeted her reflection. ‘Shit! Tell me you didn’t?’

‘I’m sorry, I did.’ he reached over, but she pushed him away.

The idiot had ignored her advice and opted for the shortest route. Damn it! Eyes lowered, she tried to overlook the fact that the night had stolen the stars and wrapped its impenetrable black velvet blanket around the car. She focused on the screen whilst gathering her thoughts. No signal, brilliant!

Paul interrupted. ‘We can’t stay here, we’ll freeze to death. I spotted a house, we are heading for that.’

‘Go outside, I…’ After three months, her fear of darkness was unexplained. Now he suggested she ventured into it. Well, that was a ludicrous idea.

‘I understand it’ll be difficult, but you need to dig deep or we will freeze out here.’

‘If you had listened to me...’ Although yelling was pointless, Clara thought it would push back the bile rising in her throat. She was wrong. With no choice, the door opened, and the contents of her stomach met the night’s shadows.

A circle of yellow light disclosed the position of her offerings as Paul produced a blanket and passed it over.

‘Take this and hold on to me.’ he said. Removing the phone from her shaking hand, he pressed the torch icon and handed it back. ‘Focus on the phone’s beam and I will lead.’

Sloth-like, she wrapped the covering tight. The knowledge that each tortuous footstep would mean stepping inside Blackheart House again unleashed an iciness from within.

Without an unrestricted view ahead, negotiating the uneven ground proved difficult.

‘It can’t be much further, you’re doing brilliantly.’ Paul’s encouragement offered no comfort.

After what felt like hours, they stumbled across some high, rusty iron gates. A flash of light at the sign advised they’d arrived.

‘Thank God,’ Paul said, ‘It’s almost over.’ As he enveloped her, a steady vibration passed between them and he squeezed harder, hoping it would help. ‘Come on, let’s get you inside.’

They honed in, located the latch and jiggled. Nothing would release it.

‘Direct the torch at the gate so I can use both hands.’ he asked.

It was stubborn, but eventually it saw sense and complied. A screaming exuded as it jumped backwards a few inches, untethered from its chains. Luck granted them access, as the gap was large enough to squeeze through.

As they approached the entrance, she paused and looked up. On cue, the night lifted its blanket, allowing her a better view. The impending black wooden door sat in the centre of the porch. Either side, the flower baskets hung limply devoid of life. It was unwelcoming, but its magnetic charm hypnotised and proved irresistible. She would go inside.

Paul examined the boarded-up windows, tugging at the wood, hoping to gain entry. It was pointless; the place was an impenetrable fortress.

‘We should look around the back for an outbuilding or something we can keep warm in,’ he said.

‘Allow me,’ she replied, the allure overpowering.

They hid the key under the plant pot, and she found it with ease. Within minutes, the backdoor was unlocked, and they stood in the kitchen.

‘How did you know?’ Paul asked, flabbergasted.

‘I grew up here,’ she answered, before taking a deep breath and scanning the room. Nothing had changed. The aga in the chimney breast still had the copper pans resting on its hotplates, the apple pie waited on the table and the inimitable plink of the dripping tap that tested her patience, echoed.

‘With nowhere else to go, we can’t.’ Clara traipsed into the hallway and headed for the lounge.‘Let’s build a fire for warmth. Look in that desk drawer. Maybe there are some matches. We have candles which will save the batteries on the torch and our phones.’

As she peered into the large, ornate mirror the voice whispered, ‘Welcome home, we have been waiting for you.’

‘Have you found anything?’ she said, a wide grin materialising as she turned. A warmth circulated through her as the darkness shone.

Paul rifled and located a small box. He fought the urge to ask why her fear had vanished, knowing the answer may trouble him.

The flickering glow mesmerised, ‘That’s my first fire. It’s not bad. Okay, let’s find some blankets and get some sleep. We should stick together, not go off on our own…’

‘I know this house, remember,’ she interrupted, ‘Back in a minute.’ The door slammed.

‘Clara.’ The pit of his stomach lurched. Damn! After grabbing the torch, he poked his head through the doorway, checked the shadows and stepped out.

With each footstep, the squeak resonated and exposed him. He stopped walking on his toes; the noise didn’t diminish any, so it was pointless. Besides, a firmer footing would be more practicable. He paused by the kitchen, knowing escape was possible. But he hadn’t finished getting to know her yet. He needed to search. With a deep sigh, he continued, hovering by the staircase.

Nothing stirred, except his thoughts weighing up the disadvantages of ascending into the unknown. His body lifted his feet even though his mind fought against it. The torch light wobbled, and as he made it to the top, his heart pounded. He needed to find her.

A cold draught flowed, and a tremble released itself as he appraised the landing. Dusty cobwebs had settled in every available nook, but a glow emitted as the moonlight reflected off the shiny threads, a wondrous site in any other situation. A mustiness lingered and dry dust hit the back of his throat. Now what?

A bang resonated, and Paul scrambled for the banister. He’d come this far, so to die in an unspectacular fashion by falling wasn’t happening. With no plan of action, he regrouped and scanned again. Then he saw it. One door devoid of cobwebs. Behind it must be Clara.

After switching off the torch, he placed it inside his jacket, before reaching for the handle, pushing it down and listening for the click.

With his wish to enter stealthily unfulfilled, he shoved and stood with a foreboding presence surveying the surroundings. Wood panelling covered every wall, and the room was empty apart from a four-poster bed. Clara perched there, watching.

‘Don’t worry, we will protect you.’ the voice informed her.

‘Clara, thank god you’re okay. You worried me,’ he said.

‘Were you afraid you wouldn’t get to kill tonight?’ she replied, studying him. ‘That’s why you brought me here, isn’t it? You lure girls with your charm, have them trust you, go for a drive, then break down near an abandoned house. It happened with Emily, Karen, Lisa and now it’s my turn.’

Paul extracted the torch and unscrewed the bulb before sliding the knife into his hand. As he kicked the door shut, Clara stood.

‘Why? Why did you kill them?’ she asked as the voice reassured her safety again.

‘Because I could. Why come with me? Are you going to beg for your life?’

Paul spun the blade as he crept forward. After licking his lips, his mouth spread into a wide smile and sweat dampened his shirt.

‘Get ready.’ the voice announced.

The walls moved as hidden passages disclosed themselves.

‘Armed police, on the floor.’ they yelled.

They cocked their guns, focused on the target and waited.

‘Come on, comply.’ she urged. ‘If you die, there will be no notoriety. No fame and that would never do.’

The knife fell, and he dropped to his knees.

‘Do you want to do the honours, Sarge?’ the voice asked.

‘It would be my pleasure, Gov.’ she replied, grabbing the handcuffs.

Writing is my therapy. Extracting thoughts makes a contented mind. I am a writer, and blogger and have been scribing away for three years now. If you like my stories then please like or leave a tip. Join me on twitter @AuthorJAThorley.

More stories from Janet Thorley and writers in Fiction and other communities.