by Courtney Chapman 5 months ago in Love
Report Story 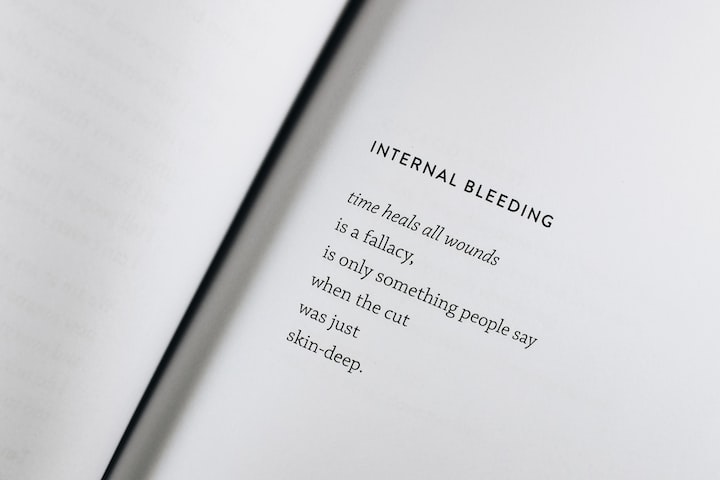 A girl fell in love with a man. The man fell in love with the girl. This man was so fierce and strong, courageous even. Couldn't be beaten or torn down by anyone. The girl emotionally brought down this wonderful man. She stabbed him right in the heart. The girl was so scared of getting hurt that she hurt the only one that truly loved and cared for her.

She realized how much she hurt him. How could he still be so kind, so in love, and so beautiful after everything? Inside he was so weak, so torn. On the outside, you couldn't see the scars. They only existed on his heart. Yet, he was still there for her. She hurt him and broke him down more than he ever thought anyone could manage.

She hid her tears well as she let her love go. She knew someone deserved his love more and could return it even better. As she walked away, she let the silent tears fall. He would never understand how much she truly needed and loved him. She vowed to herself that she would never do that to another again. Her whole life she never married, never had kids, never touched another man in any way at all. And, she thought about her one true love every second of everyday.

One day, she dies of old age, a smile on her face thinking of how happy he must be. With her last breath she whispered his name and said out loud "I've never stopped loving you." She finally forgave herself for what she did but it was too late. Her eyes slowly closed. That cold heart stopped beating. That sparkle that used to exist in her eyes when she thought of him faded away.

Her soul escaped her body. Leaving a shell of a beautiful girl who broke her own heart. Her soul would wait all eternity for him. In hope that one day they could be together again. The man came looking for his lost true love. He searched for days and days and finally came upon her house. He walked inside to find her body.

He cried and cried, so many tears spilling from his eyes. He tried to wipe them away but, they kept coming. A tightness in his chest crept upon him. He lay next to her for days and days repeating the same process. Waking up to see her cold, dead face. He would softly touch her cheek and start crying again. He didn't move from that spot for a week.

He lay there suffering from thirst and hunger. The pain of his lost, dead love was worse though. He layed there and remembered their times together. He remembered how she had walked away from him, leaving him cold and lonely. He grew angry with himself for not coming for her sooner. He had never married, had kids, or touched another woman either. He had always missed his love and now he had missed his chance.

He wanted her beautiful eyes to open. She looked slightly different from the wrinkles in her face, the bags under her eyes, and the grey hair on her head. He thought about how if they would have stayed together, they would have been grandparents now. The hunger and thirst was too much for him to bear now. He wrapped his arms around her carcass. He slowly closed his eyes and let death overtake him.

His soul left his body and traveled to the spirit world. When he arrived there his love was standing right there with the brightest smile on her face. Her eyes shone as bright as the sun and her dimples were deeper than he ever saw them before. She looked how she had looked the first time he had met her. He let one happy tear slide down his cheek.

She outstretched one arm, holding out her hand, inviting him to hold it. He didn't even hesitate. He grabbed her hand as gently as possible and pulled her towards him holding her as tight as he could. Their spirits shared one last passionate kiss and made their way towards the gates of heaven. Forever they would be together now, just as it was meant to be.