by Liz Rector 2 months ago in Horror
Report Story 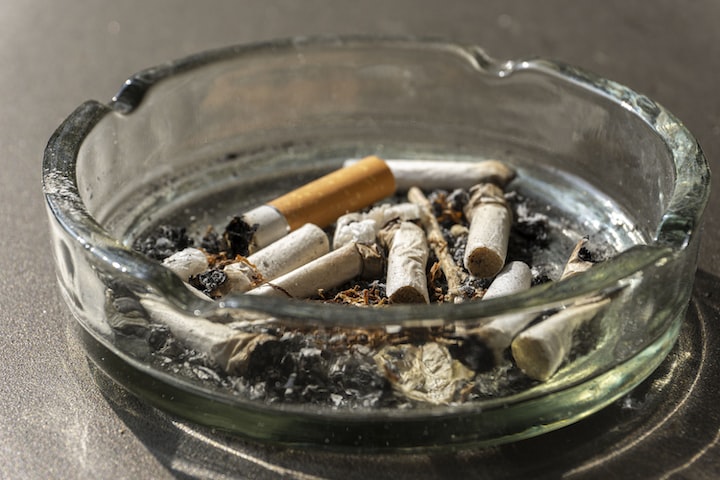 Photo by Daniele Fotia on Unsplash

It had been twenty years since I held a cigarette. I tell people I don't miss it, but I'd be lying if I said I didn't savor sitting in a smoky bar and letting my head float in the murky clouds of secondhand smoke. It didn't matter if it was bitter or stale, I still relished the way the smell turned to taste as it clung to the back of my nose and slid down my throat.

Looking down, I noticed my fingers shaking. The cigarette wobbled. I bummed it off a stranger on the street and bit the inside of my mouth as I considered throwing away twenty years of progress. I groaned. It hadn't been an easy habit to break.

Turning my gaze upward, I focused my eyes on the goliath steel monstrosity that rose out of the earth like a weed. It dwarfed me. It dwarfed the other buildings on the block. Even worse, it seemed to eminate a certain...dark energy. It hummed with a sinister vibration that hid behind a cheery visage of modernity and the promise of scientific progress.

It wasn't until I physically bumped into another human being that I realized I wasn't alone on the busy street.

I had stared at the building as long as I could until the early morning mist had morphed to rain and began falling in my bloodshot eyes. I moved forward and smacked into a disgruntled man on his way to work. When I recovered, I realized that the jarring hit had knocked the cigarette from my fingers. I looked down at the now soggy stick that belonged to the street and considered picking it up anyway. That's how nervous I was.

"Mr. Clarke?" a voice came out of nowhere. A young, sharply dressed woman was standing in front of me. "Let's get you out of the rain," she smiled at me and gestured towards the enormous doors of REM that required biometrics to penetrate. Because I didn't immediately move, she followed my gaze to the waterlogged cigarette sitting on the concrete.

"We'll get you a pack of cigarettes or a vape if you'd like," she nodded and I stepped over it. The woman leaned forward, put her hand on an unmarked area next to the door and two sensors scanned her hand and pupil. Silently, the maw of the building opened to swallow me.

We left the real world and entered REM, which in and of itself was like a hallucination. A dystopia built upon the guise of a utopia. I swallowed thickly and tried not to let my breakfast inch up my esophagus. Even in my pockets, my hands shook.

The lobby (if it could be called that) was enormous. From the outside - the street, the sidewalk - it didn't even look like it had windows. But from the inside, you could see the outside world clear as day.

Everything was 'modern,' crisp and clean, black and white. 'The irony,' I mused, considering how much they fucked around in moral gray areas and gray matter.

"Would you like that pack of cigarettes or a vape?" the nameless woman asked. "If you select cigarettes, you won't be able to smoke indoors I'm afraid," she said with mock sympathy.

She was weird. The words she chose, the cadence with which she spoke, the board-straight way she walked was bizarre. Her eyes were coal black and her teeth were whiter than a sheet of paper. She matched the decor.

"Yeah, a pack of cigarettes would be great," I answered, mainly just to get rid of her. She nodded, apparently thrilled at this news, and took off - her overpriced heels clacking across the marble floor.

Once she had gone, I let out a breath I didn't realize I'd been keeping in and turned to the wall of screens, prepared to watch the propaganda machine churn out its swill.

"Welcome to REM" a far too calm voice said. "Did you know that humans spend a third of their life asleep? That is roughly 229,961 hours in a lifetime if you sleep for eight hours a night. Why waste that precious time?" the placid tone queried.

I grit my teeth together and inhaled sharply.

"Why let your mind wander aimlessly when you could control what you dream?" The tone changed along with the screen.

It showed a short, bald, fat man morphing into a muscled-up version of himself and dunking on LeBron. It showed a woman in drab clothes touching a Toyota that morphed into a Lamborghini, her clothing and body transformed, her face made up like a Kewpie doll. It showed parents standing at a grave, then later going home and getting into bed. When they fell asleep, they awaken to open their child's room and see him there playing with his toys. It showed a scientist pulling back a bush and laying eyes on scores of dinosaurs.

"With a REM implant, you can have full dominion over your dreams. Be the athlete you've always wanted to be. Live the life you deserve to live. See loved ones who have passed. Break stubborn habits. And more...much more. With REM, you take control of the night."

I shifted where I stood and instinctually brought a hand to the back of my neck. I rubbed the skin there; maybe in an effort to soothe myself, or maybe to protect myself from the idea of ghostly mechanical vipers that peel back the scalp and drill a hole into the skull.

My intrusive thoughts didn't care about my years of training as a therapist. They chose to offer up an image of my son, Connor, head shaved, lying prone and unconscious, awaiting the implant that would ruin his life.

"That would end his life," my subconscious corrected.

"Your cigarettes," the woman had reappeared with a pack of Winston's. I jumped at the words, having not seen or heard her coming. Yet, there she was with her shiny black hair pulled tight into a bun.

She grinned. "Clearly you need something to soothe your nerves."

I briefly imagined strangling her.

"I appreciate it," I took the pack from her hand.

"They're ready for you," she tilted her head and I wondered if that smile ever slipped from her face, or if REM had it surgically sewn in place. "Follow me," she whipped around and I forced my feet to follow.

It was a long walk through sweeping hallways, into fresh elevators and spaces that required hand and eye scans. Numbly following the drone of a human gave me too much to let my mind wander.

Before entering the therapeutic arena, I had been a reporter. But newspapers died, and along with it...the truth. Visibility regarding the goings-on of sinister corporations could easily be squashed or bought, especially with a company like this that could offer an escape. With a sick twist of my gut, I wondered if Connor would still be alive if reporting had been kept alive.

We got off an elevator and walked down another hallway riddled with mirrors.

I should have saved my son.

The woman came to a stop and I nearly smacked into her. I halted just in time to see her turn and wave me into a room.

Running a hand through my wet hair, I tried to stand straighter, tried to remember to breathe, and attempted to pull myself together before my date with the devil.

Honestly, I was shocked I had even made it this far. Luckily, my DNA profile hadn't been in any systems. I never did one of those family DNA tests. I built a fake identity with my reporting know-how and the help of a few below-board friends I had made as a therapist. My DNA was now on file under this fake identity, something that could easily get me jail time and cause me to lose my license as a therapist.

I still have a daughter, but my life ended when Connor died. My wife and I divorced. The world was on fire. People were escaping the war-torn, water-starved, climate change-ravaged real world for a fantasy provided by REM. Sleeping pills became the crux of the drug trade. People signed over their lives, their savings, and agreed to be lab rats for REM, ending up as vegetables - likely stuck in dreams they could never escape from and had no control over.

REM killed my son and I didn't want him back in a dream. I wanted the world to wake the fuck up.

Hello! I'm Liz. I'm an artist and a writer. I got my undergrad from TCU in marketing (minor in art) and my Master's in Publishing from University of Denver. I have a published Children's book and Mental Health Workbook. lizrectorart.com

More stories from Liz Rector and writers in Fiction and other communities.