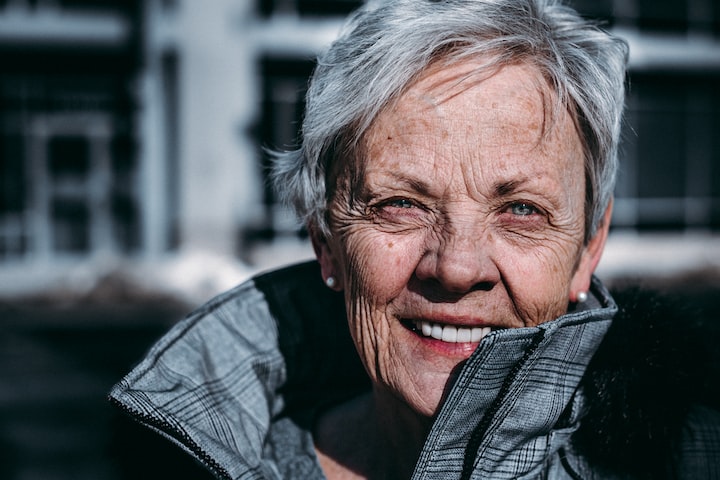 Photo by Ravi Patel on Unsplash

“Grandpa, I can’t imagine you were ever my age,” my Elizabeth said to me.

She looks excited, worried, curious. “Well, don’t stop. So, you were home alone....”

"She gets to the porch and sits. 'A lemonade would be nice, young man.'"

“I don’t even question it. I just do it. I find that it’s hard to get information out of her. She talks when she wants. She seems very old, very tired. I don’t recognize her at all, but I figure she’s family of some sort.”

“Wait, you left her there?” Elizabeth asks.

“She’s not talking. I tell her I’ll be back. I keep checking on her. I show her inside. I give her the spare room. She naps. Eventually I make her dinner. I have no idea what’s going on, why she’s there, why now, or what to do. I’m doing my best.”

“She goes to sleep early. I make breakfast and leave it on the table for her. I tend to morning chores. I still don’t know her name. I’m in the barn, milking our cow when she wanders in. She has a glint in her eye. I didn’t think about that then, but thinking back, I should have seen it.”

“It’s like a… sparkle. Um… a faint smile. There is something secret she is thinking.

"The woman says, 'Thank you for the food, Jess. I appreciate it.'”

"I know I should be eloquent but I haven’t even learned how. I blurt out, 'Why are you here?'”

"Without a moment's hesitation, she says, 'Why… to die, of course. Why would you think?'”

“She says that?” Elizabeth jumps off her chair and spills some tea. I wait for her to clean it up. “Okay, so what…. She is there to die? I just can’t–”

“Right. I get it. I agree now and, at the time, I had the same thinking... So, I’m thoroughly confused and a little horrified. I have no frame of reference for this.”

"She sizes me up. For a long while. Finally, she lets out a breath and says, 'No, you wouldn’t. I am from before. Before your family.'”

“But my family goes back–“

“Doesn’t matter. I’m from before.”

"I figure she’s maybe crazy," I tell Elizabeth. "I shouldn’t argue with my elders. My parents will know what to do when they come home. And she seems pretty healthy for being so old. I just need to keep her fed and stuff. That’s what I think.”

“Yeah,” Elizabeth agrees. “I get it. So, you didn’t think she was dangerous?”

I laugh out loud. “Dangerous? No, no. She was feeble.” I look at Elizabeth’s confused face. “She was weak, slow, frail. No, I wasn’t worried about that at all.”

“She watches me do my chores. Chats a little, but not about herself. I get her inside and make her lunch. She naps for a long time. I consider if I should visit a neighbor. I decide there’s not really an urgent problem, so I don’t. I work a few hours, then come back, relax, and read a book. I get her a lemonade when she wakes, then work until dusk. Same stuff, just another day. I make a late dinner and expect her to turn in early, but she is fully rested and asks me to carry her suitcase. To the barn.”

“What’s in her suitcase?”

“I guess suitcase stuff.” I laugh at my granddaughter. “I don’t think there was anything special, but I don’t look in there. I decide to do what she wants, thinking it might answer some questions. We walk to the barn, and she asks if I have cards. I thought that was really odd. For a bunch of reasons. First of all, she could have asked that at the house. Second, we could have played cards at the kitchen table.”

“That is so odd. A deck of cards? She wants to play cards in the barn?”

“I told you I figured she is crazy. So, I walk back to the house, get a deck of cards, get two folding chairs, and walk to the barn again. I also brought a lantern. I set the chairs on each side of a bail of hay, and I ask her what game she wants to play.

“This is so weird,” beams Elizabeth, totally reeled in by my story.

“I only know so many games, but we play cards into the evening. I can’t believe she is wide awake as the clock hits eight pm, nine pm, ten pm, eleven pm. She has me walk her back once and we both use the restroom, but she wants for some odd reason, to go back to that barn! I don’t argue. Truth be told, I’m kind of having fun.”

I laugh. She means that as a compliment.

“It’s a beautiful night. All the stars are out. We sit at the opening to the barn, doors wide, moonlight shining and a lantern hanging on a hook. I ask if she’s tired.

“She says, ‘Of course. That’s why I’m here’ as if I’m supposed to understand.

“A shooting star fills the sky, and she points. I would have missed it because I was looking at her. The night fills with light, directly in front of the barn. Let me explain that better. The area is dark. Then, it’s bright. It’s doesn’t slowly brighten. It’s like the light materializes.”

“No. Like… purple blue neon electricity. Damned if I can explain it. Then the light changes. It hardens into the shape of a sphere, and a door opens.”

“NO WAY! You’re saying… a spaceship shows up while the two of you played Crazy Eights? You both see this? Do you take a picture? What–“

“I am freaked out, but in a good way. I should be scared, but I’m not. Not even a little. I look at her, and she winks at me. She stands up and points to her bag. I can do nothing but comply. I grab it, gently. I help her to the open ship door, because… I know I am supposed to.”

“We walk up the ramp and I see inside. It’s got a few seats. It’s not huge. There are people, I guess, but I can only see suits. They ignore me. She points to a baggage strap area, of sorts. I secure her bag. I don’t recognize any of the markings inside. I want to see the people, or whatever. She simply smiles and nods me off.”

“I don’t even know your name.”

“She places her hand on my chest and it glows. She says, ‘Fixed that. Should live a long life now’ and she points me down the ramp.”

“Well, I didn’t want to go along! Yeah, I walk down the ramp and turn. The ramp disappears and the ship is solid again. Then the ship turns into that purple blue light. And it’s gone.”

“Grandpa, you’re making this up.” Elizabeth stands up, slightly angry. “I’m not falling for this.”

“You said you never told her!”

“I didn’t. But, I had an echo-cardiogram years ago. They asked me when I had heart surgery. They could see the scar tissue that formed around my heart after it was fixed.”

“Are you messing with me?”

“Elizabeth, I wouldn’t. Have I ever lied to you?”

I think about this for a minute.

“That’s a fair question. Okay, it deserves a fair answer. Your mom is like my parents were. Very analytical. She’s never been a dreamer. Everything is black and white, face value. The only explanation that she would accept would be that I had a dream, that it never happened.”

“I know. I thought about that. I even called the cab companies. Tried to remember which one had done the drop-off. Tried to establish one had ever really shown up. I couldn’t prove one had. I couldn’t prove one hadn’t. I’d waited a year or two and it was just too late for me to track anything. I did research into the house from before, and before that, and before that. I didn’t know what to do.”

“So, then, maybe you dreamed it, Grandpa? It does make more sense.”

“I told you—because you’re a dreamer. Now, you sound like your mother.”

“Grandpa, you’re eighty-six. I mean, it was a long time ago.”

I take a newspaper clipping out of my photo album and hand it to her. It’s from 1851. In the picture, it shows a young lady, about sixteen. She looks much like Elizabeth. I hand it to her.

“How did you get this picture of me? And why does it look like it’s photoshopped into such an old newspaper?”

I beam a broad smile.

“It’s not you, and it’s not fake. But seeing your face. The woman healed my heart, but she did more. She lived on. She didn't just save my life. She gave me you… You are my proof.”