by Dutch Simmons 8 months ago in Short Story
Report Story

Not all Gods are Benevolent 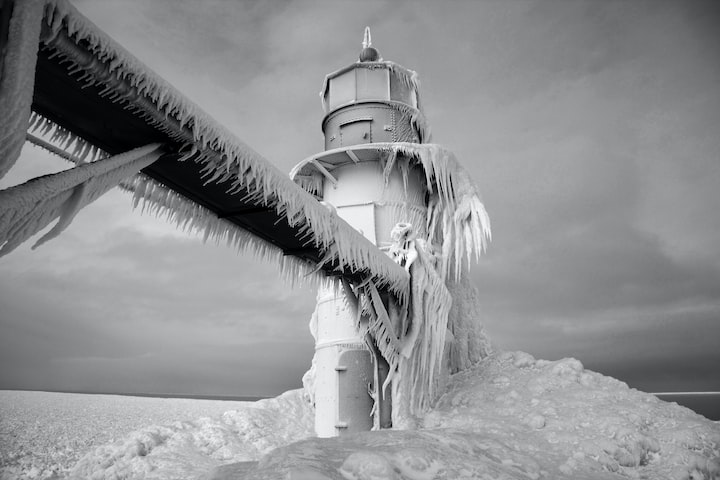 He had been warned.

The interview process was short and to the point. “Can you do the job and not kill yourself or anyone else before the spring thaw? We don’t need another ‘Shining’ type episode here.”

“Another” should have been the code to make him run. The truth was he didn’t mind the solitude. Jake welcomed it. There was plenty on his mind and the lack of distractions would free the demons from his head.

Plus the money was great, all things considered. Significantly better than the salmon boat he worked in Alaska, and as far as he could tell, a hell of a lot safer.

Solitude never bothered him. Nor did the cold.

It was the grey.

The bulk of Cormac McCarthy’s The Road was spent describing the “grey” dreary scenery. Jake wasn’t much for books, but he knew the descriptions didn’t match what he experienced every day.

It was like living inside a tunnel full of frozen exhaust fumes. Always engulfed in a cloud of dirty, frozen cotton candy. If he stared long enough, the monotony that ensued instilled a sense of vertigo.

On land, he never gave much consideration to the snow squalls and frigid, foggy haze that rolled in from time to time. He rarely ventured out in that weather, save to restock the bottles that fortified him with enough liquid courage to see through to the dawn.

Now he was the sole inhabitant of a lighthouse encased in ice in the middle of the bay. A frozen phallus that stood sentinel over the shipping lanes, entrusted to protect bloated cargo ships from becoming enveloped in an icicle-encrusted grey shroud and running aground.

Jake was encouraged to bring a dog. Having another life form to interact with would help pass the long stretches. But he had zero interest in climbing the dozens of flights of stairs every time the dog needed to relieve himself. Perhaps he could have let the dog shit anywhere it wanted and he could have tossed the tidy little turd bags below to defrost in the spring. Jake had lived in shit long enough. A dog would have been one more lifeform he would properly neglect.

The job was as menial as it was extraordinary. He was the last line of defense should any of the automated light systems fail. Centuries of technological advancement be damned, a human of questionable mental fortitude was required to man the lighthouse. The magnitude of this never really crossed his mind.

Instead, Jake focused on the shortcomings of his life and the poor choices he made. Was this another poor choice? Running away when things got uncomfortable? Afraid of what he would do if he stayed? His father was the one who ran at the first sign of conflict and resurfaced when it served him well. He returned the conquering hero, flush with cash from some shady scam. The family lived high on the hog until the money disappeared. When the arguing ensued, his father was long gone before the dawn.

Jake wasn’t running. For once he was thinking; formulating a plan to move his life forward. The frozen bay was the perfect place to do so. No distractions, no internet, no television, no voices. Just one ship to shore radio and link to the Coast Guard. His only lifelines to a humanity that long turned their backs to him.

The breaks in the grey were few and far between, but it was those moments he treasured the most. They afforded him an opportunity to use the telescope to survey the mainland.

She had to come out of the supply store at some point. Maybe a lunch break. Or a cigarette break. She seemed like a smoker. Jake was still working out her schedule so he needed serendipity to intervene.

He hoped to catch her looking towards the lighthouse. Did she think of him as well? Surely he made enough of an impression to manifest a sense of longing.

Perhaps when the winds raged and the sky was blanketed in snow she thought of him doing God’s work. How could she not recognize his stoic heroism as the guardian of countless souls afloat on the near-frozen black brine? He wasn’t doing God’s work; he was Poseidon, God of the Seas.

As the winter raged on and the water outside the shoals froze, the ships had a natural barrier to keep them in the deeper water, which rendered his job more or less irrelevant. She didn’t need to know that when she plied him with drinks to celebrate his selflessness.

He never got her name when she sold him all of his supplies for the 5 months he would be locked in the lighthouse. She blushed when she rang up multiple copies of Hustler, but refused to make eye contact as he stared intently, letting her know he was still very much a man with needs. If the needs grew desperate enough or if he was confronted with a real emergency, he could take a snowmobile across the frozen expanse of black water back to shore and run the risk of being forever swallowed by the grey.

Jake would bide his time. She would be there waiting for him. When the ice broke, he could take the skiff back to the mainland. They would go out for a dinner and he’d tell her how she sustained him in the quietest moments. When they made love he would refrain from calling her Maggie, his mother’s name, despite the resemblance. If he did, she would forgive him.

Mostly, he would promise he would never run from anything again and that his mind was finally at peace.

He had been in the lighthouse for three weeks.

Dutch established a creative writing program for his fellow inmates while incarcerated.

He is the Writer-In-Residence for The Adirondack Review.

Dutch is a Fantastic Father, a Former Felon, and a Phoenix Rising

More stories from Dutch Simmons and writers in Fiction and other communities.