On a Foundation of Memories

by Hannah Sharpe 11 months ago in Short Story
Report Story

Holding onto the past while in search of the future 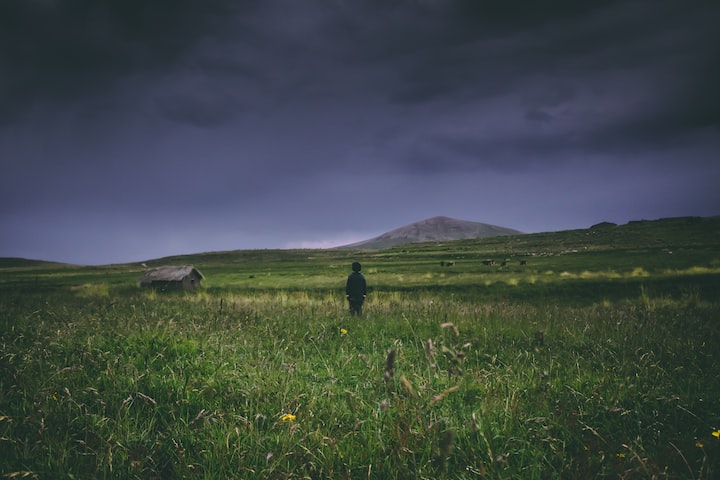 You saw her today, while you were dreaming. A child not more than ten twirling and skipping through a wheat field, the sun shimmering across her skin. There’s no fear in her eyes, no screaming or shrieking in pain. No, in this dream she’s happy, laughing even. A sound you haven’t heard in a long time.

It’s nice to have memories of happiness in your sleeping state, because that’s not what it’s like when you’re awake. Being awake means being constantly reminded that nothing is like what it used to be. That she’s no longer here with you, to love you unconditionally. To trust you, because you’re her guardian, the person she had always counted on.

Or would you rather lie here, lost in your thoughts? The memories that aren’t so good? Like that same beautiful child in her makeshift bed, writhing in pain, withering as life slowly escaped her. All her jovial pieces slipped away, disintegrating with the virus that slowly consumed her cells.

You remember, don’t you? All the praying you did, to any God that may listen. Six long months of begging to replace her there, on her deathbed. You wanted her to survive, to continue on in her life. You’d gladly take her place, if only you could. But you couldn’t.

That’s not how you feel now, though. Now you are thankful. You even think perhaps those Gods you sent all your prayers to actually listened. Because back then, watching her die, it didn’t seem like there could be anything worse. But now, now you know there is. Living is worse. And you are one of the few that have been given this misfortune.

Open your eyes. You know you need to. Otherwise, you’re vulnerable. Yes, that’s it. Now keep them open and get moving.

Ahh, this is the hell you know. The never sunny, always stormy sky rumbles in disgruntled betrayal overhead. What little light seeps through the turmoil lets you know you still have time. But not much.

The weeds are tall now, never to be tamed again. Who has time to tend to overgrowth when there are far more important things to do?

You should walk by the orphanage, remind yourself why you’re doing this. Your task isn’t easy, but without playing your part, those here will endure worse. The children left here to suffer in perfect health—those that may be part of a future far bigger than yourself—need you.

You peer in through the windows. Some are playing with old push cars and dolls, attempting to experience life as it once was. Others are eating the oat slop you can no longer stand the taste of. But with mostly grains growing in the fields here, there are limited options, with sustainability the key to continued success. And animal byproducts are no longer an option, with the inevitability of disease spread through their flesh.

You catch the eye of a young boy who steps closer to the window and waves. He knows you are a protector. And you know he’s stronger than any child should ever have to be, without his parents to hold him and tell him everything will be okay. His eyes are sunken, but they still shine bright green, piercing your soul as you pull yourself away and retreat to your path.

The barrier to the surrounding world stands open as you join the others on your team. Lightning cracks across the sky as you step through the big metal gate.

“It’s going to be a long night,” Charlie says, stammering to catch up to you.

You don’t have to respond. You both know she’s right.

You walk a couple hundred yards next to her in silence before you tip your head in goodbye, then head in your separate directions.

Tonight, you’ll need to keep your head straight. But it’s hard when you think of her. Her smile, her sweet voice. The way she always wanted to give you a hug, especially when she knew she’d done something you didn’t like. Mischievous, but thoughtful. She was the brightness in your life when all else failed. Now, you’re on your own—sad—lonely.

Daytime is distinct simply because night presents in pitch dark, but there’s no true glimpse of light through the churning clouds above. It reminds you of summers in your childhood, when your parents would close the blackout curtains in your room and send you off to dream with the sun shining bright outside. It’s like you’re back in that artificially dark room, with the sun trying to push through your curtains but blocked by the heavy sheet of material instead.

You can tell with the growing darkness the sun is setting, and you long to see it slip below the surface. A sight you never appreciated as much as you should have. A deeper darkness sets in as you take your post along the fence.

You nod to the protector standing next to you, giving silent permission for him to retreat. It’s the end of his shift, but you’ll see him again tomorrow. You wonder if it’s easier to stand here with some semblance of light. No matter, you’d choose the night shift again given the opportunity, because you know you can’t sleep in the black of night. That’s when she left this earth after all.

As your predecessor loosens his grip on the rod, shaking out his hands, you accept it from him and reactivate this part of the force-field.

Since the scientists activated the never-ending darkness through a coat of storm clouds in the sky, the barrier cannot be powered by sun light. They say it was a necessary precaution since the UV rays from the sun ignite the virus when transferred to a human host. As you understand, that’s why the perfect carrier is the bat—hidden from the sun—nocturnal by nature.

These new wands run off human power—the energy your still-healthy cells provide. If only you weren’t so healthy. Then, maybe then, you’d leave this earth and be with her again. But you aren’t sick, nowhere near it. So, you hold your rod into the air and the surge of energy connects with the other rods. Charlie’s is somewhere on the other side of the fence, probably three or four others standing between you and her.

As the last rod is powered up by a member of the night guard, the familiar jolt passes through your body, and you know the force-field is again complete. An invisible blanket covering everything behind the fence, including the orphans you hope will get some rest tonight.

It’s hard to stand there so long, holding the rod into the air, even if it’s incredibly light and your legs and back are strong. It’s not the effort behind the task, but the difficulty of watching the creatures fly through the sky, attempting to get to those you protect. The familiar tingle of draining energy from your body reminds you why you sleep so much.

Scientists didn’t mean to create a virus the bats carry. A virus that destroyed most of the human race. It was meant to eliminate the pests the bats come in contact with—mosquitos, flies, other virus carrying bugs that were overpopulated—impacting human quality of life. That’s what you’re told anyway. But they did create it. And those with altered immune systems were the first to go, not the pesky insects buzzing about. That’s how you found out she had an autoimmune disease, passed down from a prior generation. In other circumstances you would have been able to help her, to get her treatment. She would have lived a complete, full life, and create many memories. Have her own children.

But that’s not what happened. So, you need to focus on the task at hand. Those children, and the others inside, need every ounce of protection. Their immune systems were once strong, and hopefully still are. But they may not be forever, and if they catch the virus, your civilization will never be rebuilt.

Stand strong. Don’t get tired. Only an hour left now.

Your clothes drenched, your muscles twitching from the cold, you catch the first signs of the well-hidden sun rising behind the impenetrable clouds. It can’t warm your skin, not like it used to. It won’t power anything but the godawful creations that look like clouds overhead. Man-made cover driven by solar beams. But it’s enough to send some of the bats back to their caves until the next night. They’re just like vampires that way, scurrying back at the first hint of daylight.

You wonder now if that’s why humans believed in vampires. Because of the nocturnal cycle of bats, and the diseases they once carried. Though, you’d gladly take one of those diseases over the virus they carry now.

Your replacement arrives, a teen that’s become an adult too soon. It takes you a minute to loosen the grip on your rod. Your hands tend to stiffen in response to your civic duty. It’s time to shuffle back in through the gate.

“It was a long night,” Charlie says as you walk past the orphanage and toward the building where your small room is.

But something stops you, and you turn back toward the building full of children. Inside you find the boy with bright green eyes. You sit with him while he eats his breakfast oat slop, and you have a little too. He’s glad you came today. And you hope it’ll help ease the loneliness he has from the loss of his family. Before you leave, you hold him in your arms, let him know everything will eventually be alright.

You don’t tell him this, but you vow to bring him home with you someday, when you no longer need to be a protector. It gives you hope for a future. It renews your confidence in a cure. There’s the hint of pep in your step as you slog through the puddles back to your building.

When you reach your room, you let out a sigh of relief as you change your clothes, slipping on something dry and warm, then collapse into bed. You reach under your pillow and find the heart-shaped locket you keep there. It used to be hers, with a picture of you inside. Your only physical reminder of her. Opening it now, you see her face. Bright, happy, posing in a wheat field on a sunny day.

She would have liked the boy with the bright green eyes. You imagine them playing together, frolicking in joy. Perhaps she’ll look over both of you now, and you send a prayer up to her in hopes she’s listening. The weight of exhaustion tugs at you as you speak to her in your mind.

You hold the locket against your heart as you drift off to sleep, hoping you’ll get to see her again in your dreams.

Writer of novels and The Parenting Roller-Coaster blog. Dabbling in short stories.

More stories from Hannah Sharpe and writers in Fiction and other communities.