by Julia Maupin 6 months ago in Short Story
Report Story 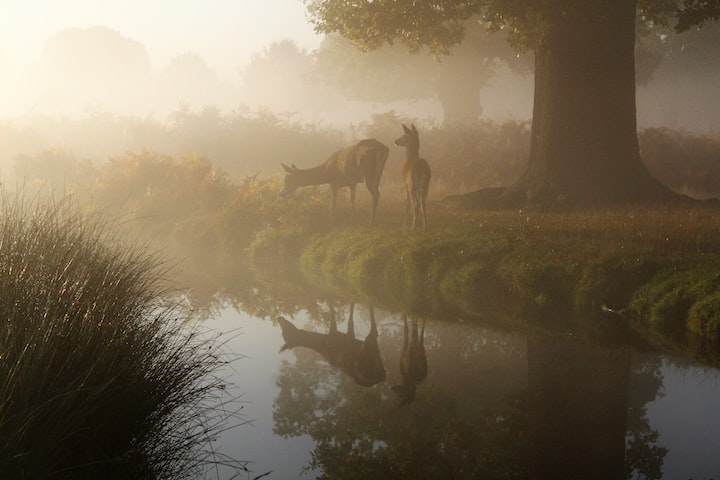 Photo by John Royle on Unsplash

Sarah awoke that morning with ease, the dew sparkled on the ground ahead of her as she peeked out of her tent vestibule. She always slept better while camping than indoors but it wasn't due to comfort. There was just something she couldn't quite put her finger on that led to such deep and fulfilling sleep while on the trails. Perhaps the exhaustion of the day is what led her to dreamless deep sleep or maybe the silence of the night lulled her subconscious deeper than she could experience while home. Either way, she never questioned it, merely enjoyed it when it occurred.

She quickly put on her boots, leaving them untied, and grabbed her water jug. She would need coffee, not for the burst of caffeine but the warmth it would offer her on this chilly morning.

As she prepared herself for her morning hike she found herself staring off into the distance, wondering about the creatures beyond view. Her pack contained a small bell so while hiking it would alert creatures to her presence prior to her walking past them. She hung the bell upon the end of her food bag at night hoping it deter the raccoons and hungry critters further from attempting to reach her rations.

With her boots haphazardly tied Sarah began to trod down the well-worn path of the trail towards the creek's bank, it was a game trail in the beginning but had soon become the easiest route for humans to travel for freshwater as well and quickly became flattened by the weight of boots, Tevas and numerous other styles of footwear.

She enjoyed the walk, its peacefulness that enveloped her soul, she could think of no other place she would rather be than right there. Ahead of her, she could hear the trickle and splash of water as it ran across the rocks. Its gentle serenade could pull weary hikers and thirsty wildlife alike to its rocky, shallow banks.

She reached the edge and knelt down, jug in hand and steamrolling from her mouth. She dipped her hand in the icy cold water with the dull red jug bubbling and gulping the contents of the stream. Later at camp, she would filter it and boil it and turn it into the warmth she so craved.

She watched the jug fill up with the current, she could start to feel the sun's warmth as it rose from the horizon, she raised her head and faced it, eyes closed to bathe in its warmth. She smiled as it spilled over her, little moments of love like this are what she walked miles for.

As she opened her eyes to look at her red jug she noticed a leggy creature who had joined her from up the stream, its gentle hooves she never even detected as it cautiously drank water nearby. A hushed gasp escaped her mouth and the doe gently looked up. Sarah made sure to remain motionless so she wouldn't frighten off the tender animal. She marveled at its elegance, the long dark lashes that eclipsed its saucer-sized eyes.

Sarah was in such awe of the creature that it took her more than a minute to realize that something about this particular animal was different than normal. Its face and hindquarters showed signs of some type of growth hanging off its coarse fur. She squinted, unwilling to blink not wanting to miss anything. The doe moved closer to the water head dipping down to drink from the bank and that's when Sarah realized what she was looking at. Mushrooms.

The creature before her was a deer for sure but the growths along its back looked like varieties of mushrooms growing along with its fur. She could easily identify the smooth oyster mushrooms along the muscular legs and enoki along the spine. The sight of such a beautiful and haunting creature caught her breath.

Sarah held her stance for as long as she could, holding her breath and wishing for more balance and patience. Soon though she realized she could kneel no longer, she allowed her knee to slowly fall and as it did the doe realized it wasn’t alone any longer. “Oh, deer” Sarah thought to herself and momentarily worried of the dangers the creature could pose.

Without a moment's notice, the deer straighten its fungi spotted back and bolted the way it came, just as stealthy as it had arrived and as it ran almost as if in a dream the mushrooms fell from its back leaving the doe as pure and innocent looking as one might find in a lullaby.

She sat for a moment on the dew-covered rocks and grass allowing herself to gain strength and giving reverence for the moment she had experienced just moments before.

"What the hell just happened?" she muttered to no one in particular.

Blinking wildly she sat, in the rocky-dew-covered grass, pants beginning to soak up the moisture and send a chill over her body.

She questioned her need to call ranger services. The deer didn't seem dangerous by any means and well it seemed fine as it ran away. Maybe she was the thing to be on the lookout for. Maybe keeping authorities out of it would prolong the strange animal's life on the other hand she wondered if it was in pain or harbored some type of infectious disease.

She knew what she had observed, she replayed the last moments of the deer running away over in her mind as she stood up and started to walk in that general direction. The closer she got the crazier she felt, losing herself in the last few moments of the replay. She retraced the deer’s path from the treeline to the bank when she noticed a mushroom growing on her boot.

"What the fuck?" she said loudly she knelt down to pick it off and she noticed the turkey tail growing from the side of her forearm. "Oh my god!" she frantically started wiping the area, stumbling backward tripping over a line of rocks she fell.

When she looked again the fungi were gone.

"Okay, Jesus, get a hold of yourself," she said matter of factly to herself.

The line of rocks that lay beyond her feet caught her attention, she stood up again noticing it wasn't a line but a large circle about 5 feet in diameter. In her haste to remove the spores she had tripped over the rocks causing them to break from the circle, she gently nudged them with her foot back into place.

Sarah stood there, her heart still pounding in her ears. "I must be losing my mind!" she exclaimed and a nervous chuckle escaped her lips. "Maybe I need my morning coffee more than I realized." She walked back to her red jug she had left by the bank, realizing she had never placed the lid on it the water had spilled out, so back she knelt, this time with her back to the doe's line of travel and her eyes to the stream. "Must have just been the sunrays playing tricks on me. I'm fine.... everything is just fine," she whispered.

I'm just here trying this out. Seeing what sticks and what can be worked with. Tell me what you want to see more of. I'd love to write a story just for you.

More stories from Julia Maupin and writers in Fiction and other communities.