by Thadd Ristow 5 months ago in Short Story
Report Story

A Short Story - by Thadd Ristow 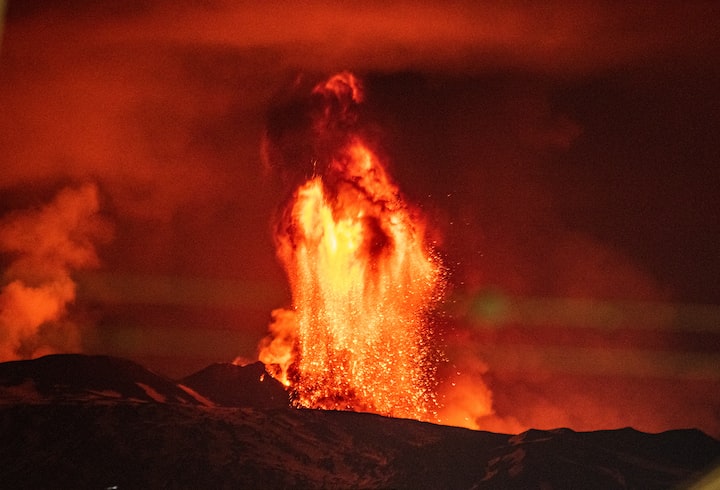 Fire lit the roadside, I inhaled and then exhaled into the dusty cloth wrapped around my face. The sky was darkened by the acidic devil’s rain that burned my eyes and any bare skin showing on my body. Any sunlight that could get through the clouds was not blue but crimson red reflecting the fiery wastelands of our nation.  I remember that day like it was yesterday. I awoke that July morning to the TV blaring throughout my parents’ house. I walked into the kitchen to see my mom staring blankly at the screen.

“Mom? You alright?” I asked as I grabbed the carton of orange juice out of the fridge. I poured myself a glass, looked up at my mother who made no motion to respond to me. “Mom!” I called to her, “hello? Anybody there?” She turned around quickly to me and said, “Oh! Charlie, you startled me!”

“Yeah, I walked right past and even poured myself a glass of orange juice before you noticed. What’s on going on?” I replied back.

“Oh, uh, just some news about a volcano in Yellowstone National Park. Nothing different, just scientists muttering on about science stuff.” She smiled as she rolled her eyes at me.

The program came back on screen and the news anchor started to speak, as I strolled over to sit next to my mom.

“Top Story” was displayed across the screen just like it was since Monday of last week. They’ve been doing this news story covering the Super Volcano in Yellowstone National Park. Scientists were baffled at the fact of all the animals were fleeing from the park. Caribou, wild cats, and other wildlife herds were running away from the area surrounding the volcano live on camera as the reporter spoke from an aerial view.

The helicopter panned across the fields of green where the volcano was settling inside the earth. On the ground a reporter had a seismologist for an interview, “What do you think is going on here, doctor?”

“Well there are a lot of questions still unanswered,” he started.

“Could it be possible that those bison sensed that something was coming?Do you think the volcano could erupt anytime soon?”

“Well in all honesty, I believe that the danger posed by Yellowstone should not be underestimated.” Replied the seismologist.

Suddenly, my mother shut off the TV. “Those researchers sound like they have it under control.”

I was a college student studying at the University of Georgia for Animal Behavior and I was home for the summer to help around the house with my parents. Home was rural Nebraska about 30 miles outside of the capital city. I was sort of that black sheep of my family compared to my brothers. Henry was the captain of the football team, from battling for touchdowns, he was battling for freedom; my brother, Henry, soon became a Captain for the US Army. Jesse, his fraternal twin brother, was an academic scholar who soon went on to study seismology at UCLA and that’s why later, he joined the military as well.  They were both out of the house as soon as they graduated high school. I haven’t seen them in person since Christmas when they both made a surprise entrance for our family’s gift! Those were happier times...

I had just gotten done mowing my parent’s lawn when I felt the tremors beneath my feet. These were tremors that had never been felt before. It was irrelevant to Nebraskan climate and seismic activity barely happened on a large scale. I pulled my headphones off to hear sirens blaring throughout the air. I had no idea what was going on until my mom called me inside. She had the television blaring again, the news story on Yellowstone was still on but the subscript on the TV read: “BREAKING NEWS.”

The reporter was in such a panic and fright as she was explaining that the super volcano in Yellowstone National Park had just erupted. My stomach dropped and my heart stopped for a second as time seemed to be frozen as I looked at my mom. She had tears flowing down her face and her hands were covering her mouth. I rushed back out into the siren filled air, I panned over across my neighborhood to see my neighbors crying out and looking to the horizon. I turned my head towards the western horizon. My eyes became wide with fear and disbelief as a gigantic ash cloud from the eruption had already began to edge closer miles from my town.

In such awe and amazement, I stood and became frozen with fear but then I looked down the street and saw the flashing lights of a police brigade and a National Guard convoy heading down the highway. They were telling us to get inside immediately! I did what they ordered and my father got home shortly after I entered the house. We all stayed inside crowding around the TV as the broadcast told us to stay indoors until the ash cloud passes.

Two weeks--we had to stay indoors on rationed food before we had any clearance to come outside! As I stepped out the door a soldier greeted me with a gas mask. The air was so clouded; the sky was dark as the ash cloud was still above and the filth of ash engulfed the town and maybe even the state. Nobody knew how bad it really was beyond state lines.

The memory is the only thing that replays in my mind as I journeyed into the badlands of the Post-Devastation America. I made a promise to my parents that I would find my brothers and bring them home safely. I would travel into “Hell’s Gate”, the nickname of ground zero of the volcanic eruption. My brothers were stationed somewhere around the “Aftershock Zone” but nowhere near the incineration of the blast. It would be a miracle to see them alive, I need to find them no matter what. I made a promise.

I’ve heard many stories about what lies within the blazing horror of “Hell’s Gate.” Some people have been repeatedly saying that there were monsters roaming the charcoaled grassland surrounded by lava. But I don’t believe in monsters; my brothers always told me that monsters were just your imagination triggered by your fears.

I had 2 bottles of water, a half loaf of bread, and a couple pieces of jerky left in my satchel. Sometimes I’d see other travelers walking away from the direction I was going. I don’t blame them. This trek was a suicide mission! The heat from the volcano was still red hot with lava and falling fiery rocks that rained down from the sky. I had made it to the border of Colorado and I could already see towns leveled by the blast. Once I made it into Denver, it was chaos.

Trees were torched, streets flooded with corpses, and their buildings were in ruins. There were still people trying to find their old belongings in the wreckage but I didn’t think they’d find anything. Everything was gone. Even if the government could raise us up from the ashes, nothing was going to be the same. How could it? One-third of the country had been incinerated and there was still an ash cloud above our heads. This was the reality; there was nothing for miles but fire and obscurity…

More stories from Thadd Ristow and writers in Fiction and other communities.