by Megan Stewart 2 months ago in Short Story 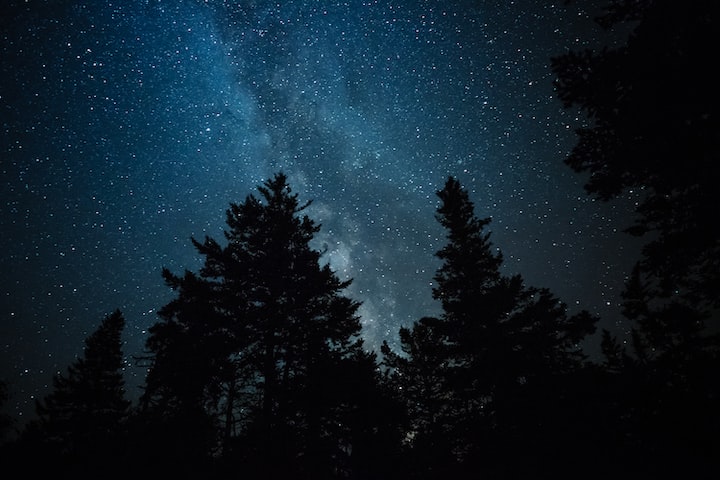 Rain beats down on her. The night’s chill barely fazes her as she pounds through the courtyard. She looks over her shoulder, and though she doesn’t see anyone following her, she senses someone just out of sight. She controls her breathing, feeling her heart pumping in time with her feet.

She knows it’s a bad idea, but her curiosity has never been something she could control.

She awoke to the sound of thunder outside her open window. A small puddle had gathered on the hardwood floor just below the white windowpane. She got up to grab a towel to dry the floor before it set in, and noticed movement just outside when she bent down to clean up the mess. Her head snapped in the direction where she thought she saw something, bull all she saw was trees and a heavily landscaped courtyard in the distance.

She shook her head and returned to the task at hand. Lightning flashed, followed by booming thunder. She hated storms. They always brought with them restless sleep and a wild imagination. This storm wasn’t any different.

The wind howled from beyond the window, and as she listened, she swore she could hear faint screams. She stood up from the floor, shivered as she looked outside, and threw the wet towel into the laundry basket. Against her better judgment, she pulled on a sweater, grabbed her umbrella, and headed outside. She forgot her umbrella from its place beside the front door.

She looked around the complex, and didn’t see but a few lights on in distant windows. She flipped up the hood of her sweater and stepped out from her porch. She walked through the winding apartment complex, not sure what she was looking for. Leaves rustled in front of her, just beyond the tree line. She never went this far out during the day, but that night was different. Her senses were heightened thanks to fear and curiosity.

She pushed back protruding branches, and walked into the woods. She heard more rustling and what she thought were whispered voices. The rain eased off as the trees provided their leafy protection, but the wind still battered against her. She didn’t know what to expect as she moved forward, careful not to make a sound.

Light shone through a break in the trees, and flickered like flames in an open fire. The air was thick and heavy with humidity. She thought she left this claustrophobic weather behind in Louisiana when she moved to the islands.

She pushed up the sleeves of her sweater as the heavy air pressed down upon her. Further into the wood she went until she could almost smell burning wood. She looked around her quickly, and not sensing anything, kept moving forward. The snap of a twig to her left had her turning her head and stop walking. She could hear a rustling of the leaves that was moving in her direction.

As quietly as she could, she backed away from where the rustling was coming from. She kept her eyes following the movement. If she was right, she knew what was lurking in the brush. She just needed to get to the break in the trees and she’d be home free. Nothing had ever been able to match her speed.

More twigs snapped around her. Whatever it was, there was more than one. A low growl confirmed her suspicion.

Anger flared within her. He was hunting her down again, threatening her new life. Adrenaline poured into her veins, and without a thought to herself, she took off in the direction of the courtyard.

She sees the light of her bedroom from the courtyard. Just a little more and she’ll be safe. She picks up speed when she hears claws scratch against the stained bricks of the walkway. They’re too close to her. She can practically feel them breathing down her neck. She chances another glance back, and finds herself alone under the rain.

“Shit,” she says under her breath.

She slows her approach and fumbles for her keys. Her soaking wet fingers can barely grasp the small metal keys. She finally gets the key into the lock and allows herself a small, victorious smile. She hurries inside and slams the door closed behind her. Leaning against the door, she lets out her breath and sinks to the damp hardwood floor. A hand runs through her hair, and as she looks up, the hand stills.

In front of her sits a man with long, black hair and eyes that seem to glow in the moonlight. He wears loose white clothes, his black top hat seemingly out of place. His lips are pulled into a tight smile.

“Alo mwen renmen anpil…” he says as he flashes his teeth.

A shiver runs through her as she tries to find her voice.