by Luisa Gillies 2 months ago in Horror
Report Story 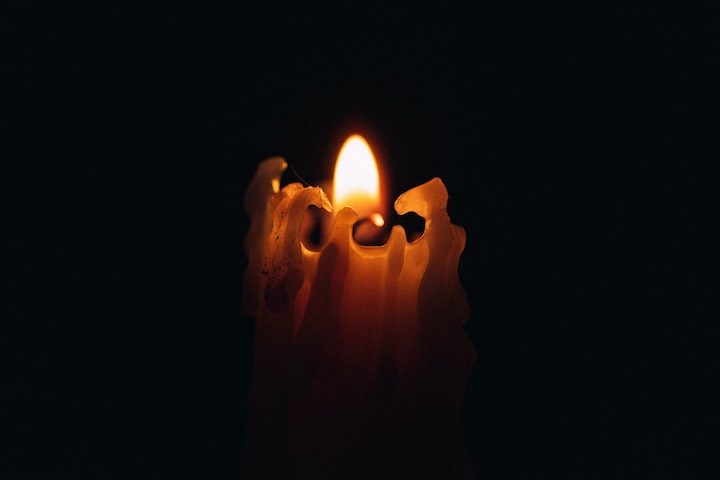 The first person to notice it was a woman called Maria. Women didn't tend to enter the woods at night, but Maria had a Great Dane called Jay. She walked him past the old cabin every night, letting him trot on ahead to guide her through the trees.

When Jay started to bark, Maria felt her body tense up. Jay only ever barked at strangers. She looked around, but the darkness practically blinded her. Black trees, leaves, and snippets of a moonless sky. The shadowy figure of Jay jerking on his leash, pulling her around the corner of the path. Barking incessantly for no apparent reason.

When the outline of the cabin came into view, Jay suddenly let out a high-pitched howl. He lunged forward, pulling the leash from Maria's hand and shooting straight towards the cabin. Shivering, Maria brought her hand to her lips and tasted blood.

That's when she saw it. The steady flickering of the candle, lighting up the warped glass of the cabin window. Just a pale, dancing circle of faded yellow. And Jay, leaping head-first towards it.

The impact between Jay's skull and the thin glass made a strange sort of sound, almost like splashing water. The window shattered, creating a cloud of flickering shards that seemed to freeze in the air, just for a moment, before descending to the ground. Jay's body followed them down. He landed on the grass with a heavy thud.

Maria rushed towards him and fell to her knees, reaching out to feel him in the darkness. Her hands only found dry grass and mud, at first. A large piece of broken glass cut through her finger, and the smaller ones embedded themselves inside her skin. Then she felt his fur, and the reassuring lick of his tongue on her cold fingers.

The light made her look up. The candle was still in place; still flickering steadily. She could see it clearly, now – a tall, thick cylinder of bright white wax, resting directly on the windowsill. With a line of black ants making their way up the side.

Still on her knees and clutching her dog, Maria watched as the ant at the front of the line walked confidently into the flame and disappeared. The one behind did the same. One by one, the ants marched into the fire, making the smoke of the flame turn grey. The smell of burning protein hung in the air.

Footsteps from behind her. Maria swung around.

It was just a cat. Maria realized she'd been holding her breath, and she let it out shakily.

Cats usually liked Maria, but this one walked right past her – straight towards the candle. She watched as it calmly leaped up to the windowsill and slid through the hole in the window, picking up small shards of glass as it passed.

A dark object flew through the window and knocked the cat down into the cabin. Just as a flutter of wings gave away its identity, another two birds suddenly came crashing into the cabin. The cat let out a scream of almost human desperation.

Maria stared as feathers and fur were ripped out of skins and flew around the air, swirling behind the flickering light of the candle. The noise was high-pitched and deafening, and she covered her ears.

When silence fell, Maria felt herself snap out of a trance. Scrambling to her feet, she grabbed Jay's leash and turned to run.

But they were coming, now. The light from the candle seemed to have gotten brighter, because Maria could suddenly see much further into the woodland than before.

A crowd of people was walking slowly towards her – towards the cabin – towards the candle. Maria yelled out, but no one caught her eye. She tugged on Jay's leash, but he wouldn't move, so she found herself frozen in place, just staring at them.

They seemed to be multiplying in number, and they seemed to be speeding up. They were suddenly all around her, bumping into her, barging past her. She yelled again, begging them to stop, but they just kept moving towards the candle. She could see the candle's flame in every single wide, unblinking eye.

Maria felt the leash slip out of her hand again, rubbing against her already bleeding hand. She tried to move, but she was completely surrounded, now.

The pressure increased rapidly, winding her. She found herself being dragged along with the crowd, kicking and screaming to no avail. Jay was nowhere to be seen.

By the time they had begun to walk over her face, Maria had calmed down. Squinting through the gaps between the moving bodies, she could see the candle again. It flickered, and she finally understood.

Laughing, Maria calmly stood up. The crowd parted easily to give her space. She wiped the blood onto her sleeve.

She moved with them towards the candle with a wide grin on her face.