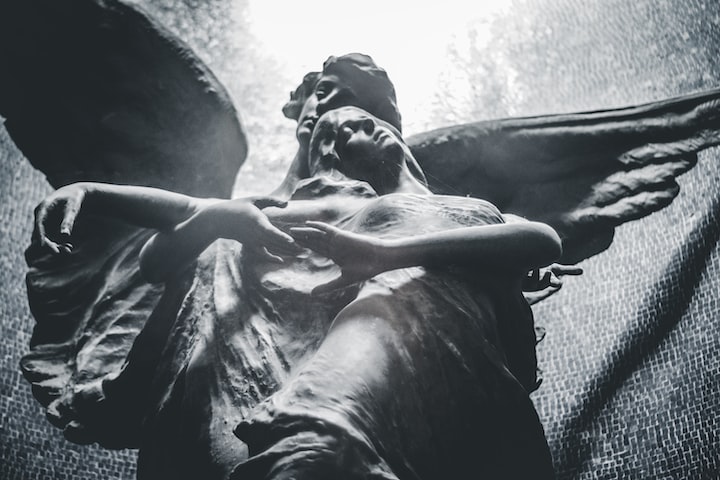 Photo by Luigi Boccardo on Unsplash

I had trouble sleeping that night, glancing at my alarm on the beside table glowing 11:11PM. Giving up at my attempt of a good nights rest I began to make a list of the things that were bothering me. Earlier at the library Caroline had greeted me politely, even after my failed attempt to scare her she invited me to join her for lunch. A persistent memory of Caroline I hold dearly is she only ever emanated kindness and grace in our times together. That half hour made me really think about my life, instead of telling me how I should live my life and what I should want out of it, which everyone hates to hear she had asked me what I had wanted. "If you listen to everyone else and are complicit with what they think you should want, you will lose your ability to make decisions for yourself. When people make decisions for you it’s easier than if you were to figure it out on your own. You will only end up miserable”. She said all this with a tone that made me respect her more, like a mother except she was never blessed with children. With that she mentioned a book she had once read, an unusual read for her because she's not devout in faith but she said it was about a spiritual journey and general life principle. "If everybody could all be just a little more supportive, patient and kind, we shouldn't be telling everyone else what is right and wrong and pass judgement, instead we need to be telling one another how much progress we've made or how they see us with positive affirmation. I see you, I think you're making an effort and you can get control back. You just have to want it, but is it what you want? Make a list of what you want, and make out each step to clarify what you need to do. When you're done you'll just have to sort it out and take it one adventure at a time". Caroline was right, I had to put in some work to try to fix myself.

I met with Caroline at the library for her lunch break everyday, I had no friends except for her. I wasn't working yet, but I did have the intention. She helped analyze my list and asked me some really important questions that would help put them in better order. She would always be encouraging. It helped tremendously. Someone who wasn't judgmental and someone I could share absolutely everything with.

After six months I had made huge strides. I had a full time job in retail selling designer clothing, which wasn't far from the library to meet with Caroline. Still sober, and still attending meetings I was positive and in a good space. I had saved enough to go to University for a year, but I would still have to keep working.

Then that day happened, it was a normal shift for me on a Thursday after my classes. I was helping an older gentleman with button-up shirts and blazer color patterns when a man walked in. He took off his leather gloves and undid the buttons on his black coat before he came in further and we locked eyes. It was as if I had known him in another lifetime, there was this energy and I wasn't the only one feeling it. He smiled and I think I melted, then he stepped in and walked over to the ties on display. I excused myself from the older gentleman after providing a few suggestions. Then I proceeded to make my way over to the ties, he stared at me walking over under his brows. When I made it over to the display, without even looking at me he asked, "What are your suggestions?". Replying I said, "It depends, what do you have in mind?". When he lifted his head up I could tell he was surprised by my response, he was so very handsome. Eyes so blue I could drink from them and then that smile. He was beautiful. Then however he got frank, "A funeral, and I already have a black suit". I immediately was so embarrassed and put my head down. I selected a few for him, playing with patterns that might reflect off his eyes. He picked out a couple of the choices I gave him and payed promptly before leaving. It was good he left because I turned as red as a tomato. I had to work the next day after classes again. Only this time when I walked in my boss began laughing at me. "You got a present in the backroom, hurry up kiddo". There was a massive bouquet of white and pink roses, but I was looking for my surprise and this couldn't be it. I decided to glance at the card on top, it was for me. Mr. Tie guy sent me a splay of flowers. The card had read, "To the beautiful woman who helped me with the ties, I hope next time I stop in for a tie it will be for something else I have in mind, Yours Truly Lawrence". I peed myself a little.

I met with Caroline that weekend on one of my breaks. She saw I was happy, she knew I was healthy and stable. She also knew rushing into something while in recovery could be dangerous, but she was there to be my friend and only ever wanted the best for me. It was as if she had adopted me. Right as I had to go back to work Caroline handed me a thick brown legal size envelope with my name on the front. She made me promise to only open it when I was at home. I promised her and everything was strange about that afternoon before I was able to go home.

When I got home a few hours later which felt like forever, I opened the contents on my kitchen table. Inside was filled with paperwork, I seriously thought she was suing me or something until I found a handwritten note from her. It went as so, "My precious Elena, I have been keeping my declining health a secret from you. I never wanted to burden you or jeopardize your recovery. Upon receiving some information last week, I have only gotten worse. I received a diagnosis of pancreatic cancer just a couple months ago and surgery was not a safe option. Please don't be angry that I didn't want to go through radiation or chemotherapy. My lot would have been only a couple of painful months extra at best. I decided to get my affairs in order during this time, I want you to have everything. I have no family to leave it to, and I have already arranged a few donations to charities. My lawyer will take care of everything for the transfer, there's quite a bit for you to sign and he will go over that with you. Just call him when you are ready all the information is in here. I won't be here much longer so I have arranged to stay at a hospice facility far south where its warm. You remember that movie don't you? Winter must be so cold for those with no warm memories, if only I had a real love affair just once. Elena please don't wish with your life, live it. I will be with you every step of the way, but only in your heart. Lovingly Caroline". My heart broke, and it crashed and it burned in the deepest depths of my stomach.

A week later I was still reeling from the thought of Caroline not here, but I made a promise to her and to myself to keep working on being better. I kept up with meetings, as well as school and work. She had already left and I received a few scattered phone calls from her but I could tell she was worsening. It scared me talking to her and she could hear it in my voice. Her lawyer then began to relay any messages to me. From what I could understand after signing everything, the money and property once liquidated for me was more than enough to pay for the rest of my schooling and to not have to work as many hours. Everything was still surreal to me.

Another week had passed by, and the haze was lifting. I even called Caroline myself, I wasn't afraid anymore and it wouldn't have been fair to her if I didn't try. As I got off the phone with her and made my way off the bus to work I literally bumped into Mr. Tie guy himself. Two coffees in his hands spilt over each of us. We both apologized, my work dress is covered in black coffee and all I could do was laugh. Then he said to me "I didn't know how you took your coffee and I thought I would drop by to see if you were working". I said to him matter of fact, "I won't be working tonight now, and I'll have to catch a cab before I freeze in spilt coffee". It was at that moment I should've ran and I didn't, but he said to me, "Come to my place, I don't live far and I'm parked right here. You can clean yourself up and I can have your clothes laundered right away. It was my fault, let me make it right". I took his hand, "Show me the way".

More stories from A E Sigurdson and writers in Fiction and other communities.