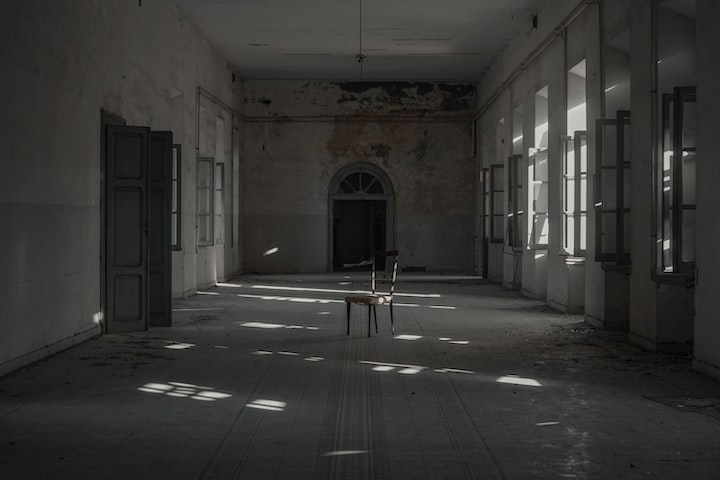 Photo by eleonora on Unsplash

I knew it was all over the second the power went out. Darkness filled the living room, screams could be heard from outside the windows. It was only a matter of time before the radiation got to me. I didn’t dare peek out the window. Instead I sat crouched on the ground, knees to my chest, my face pushed tightly towards my lap. I held my eyes shut for as long as I could, what felt like days.

I counted each sunrise and sunset as they happened. One… two.. Then the third. Had I been spared? I let curiosity get the best of me as I lifted my head and rotated slightly, lifting up just enough to peak over the window sill.

That was the first time I laid eyes on what was left of my once suburban oasis. The yard my mom had worked so hard on brought to dust in the explosion, not a blade of grass stood a chance against the radiation. The sun shine was a bright red, a smog layer covered what view I had of my neighbors across the road.

Had I been so lucky? To survive such a terrible attack? Panic ensued as my fear morphed into worry. I had no idea where my mom was. My dad. My little brothers. All probably gone in the flash that decimated the simple life I once knew. I had no idea how I was supposed to make it without them. But if I had survived, then there must be others. And I had to find them.

What was once a pleasant walk now felt like a terrible burden. The creek, as I remember it, used to be full of small fish. There’d occasionally be a bird diving in or a deer coming down for a sip. But now it was as desolate as the rest of the barren wasteland we were forced to be a part of. The fish all died from the radiation, what fish survived were unsafe to eat and the deer, well, they all fled to high ground before the explosion.

Six months ago if you had told me I’d still be alive, I wouldn’t have believed you. Considering Mom and Dad didn’t make it past the first night and my little brothers didn’t even survive the explosion. In the first month or so, there were seven of us. Two succumbed to radiation poisoning, one to what was probably pneumonia and the rest… the rest just couldn’t take it anymore. And I understood. This is no way to live.

I made shelter in what used to be the town’s church. I haven’t had the courage, or the curiosity, to leave town yet. I mean, who’s to say what lies beyond it’s borders? After the bomb hit, the power grid fell to pieces. Phones no longer worked, news stations no longer reported and, based on rumors I heard, enemy soldiers might have invaded. So for me, staying in this small town in central Ohio felt like the safest place to be. I was just a blip on the map most people would look past.

Everyday I would walk from the church to the creek. The past few months, the landscape has changed a bit. The thick red fog that used to hang over has slowly dissipated. Now it’s just a slight yellow tint to the clouds that hang above. The sun barely peaks through most days, but on the days that it does it’s too hot to bear. But today was as usual as my days have become. Dusty walkways show where I’ve been travelling. The way down to the creek was solemn, but nice. The fish in the creek died a long time ago, and what fish remain are too radioactive to eat. But the water still runs clear, and considering all the wells in town have dried up, it’s my only option.

Making my way back to shelter today felt more or less like normal. A couple of birds singing in the trees gave the smallest glimmer of hope. They were towns only other residents and when they sang was the only time I felt like I wasn’t alone. Other than them, no other animals had returned to town yet. I can’t imagine any living creatures would be rushing to return any time soon.

By the time I got to the church, night had fallen. The sun usually sets around 3:30pm now, that is if this watch is still correct. I sit in my bed with my water bottle and a can of whatever soup or beans I could find in the pantries of neighbors. And just like each night before, I put my head down on my pillow, staring up at the skylight. The faint remnants of stars sometimes still shine through the cloud cover, but tonight I wasn’t so lucky. I found myself drifting off to the sound of the neighbor birds singing, holding back tears knowing that I survived another day.

What seemed like hours later I awoke to a crash outside. While not totally out of the ordinary, given the amount of buildings that have collapsed due to damage, my gut was telling me to not see this sound as normal. I grabbed what little I could fit in my arms and made my way down to the church’s cellar. I considered it my panic room, as it was the most hidden and discreet room in the building.

Not two seconds after I turned the lock on the cellar door did I hear another crash. But this time - it came from inside. I held my breath and clutched to the heart-shaped locket my mom had given me mere days before the explosion. It was all I had left of my old life and the only thing that ever brought me comfort.

Peering through the peephole, I could see the shadows of multiple people, dancing in the light of my lantern upstairs. Mumbled voices talked for a few moments before a blanket of silence fell over the space. Had they left? I doubt they would see my makeshift home and just leave it be. They were here, likely looking for something. I just hoped that something was me.

Finally taking a deep breath in, I backed away from the door. Taking slow, light steps so as not to make the floor creak. Still clutching the locket to my chest, I exhaled. Just then, I heard the mumbles again, only this time - they were at the top of the stairs.

I slapped my hand over my mouth to muffle my cries. The people began their descent down the stairs and towards the door. The only thing that stood between me and my possible demise was a flimsy piece of wood, without so much as a deadbolt. I crouched in the corner of the room, held my knees tight to my chest and buried my head towards my lap. I had become so confident and independent these past six months, but when faced with danger, I still reacted the same as I had six months ago on the day of the explosion.

Nuclear warfare takes no prisoners. I felt in my gut the enemy soldiers were on the other side of the door.

There was a loud thud against the door, and light poured in. Blurred by my tears I let out a scream while three men with head lamps and gas masks rushed to my side. I shut my eyes before they could get close, but somewhere in the chaos I heard one of them speak:

“Hey! Somebody call for EMS! We’ve got a survivor!”

More stories from Alesia Brooks and writers in Fiction and other communities.