by Lexys Martinez 4 months ago in family

What Every Mother Needs To Maintain Sanity 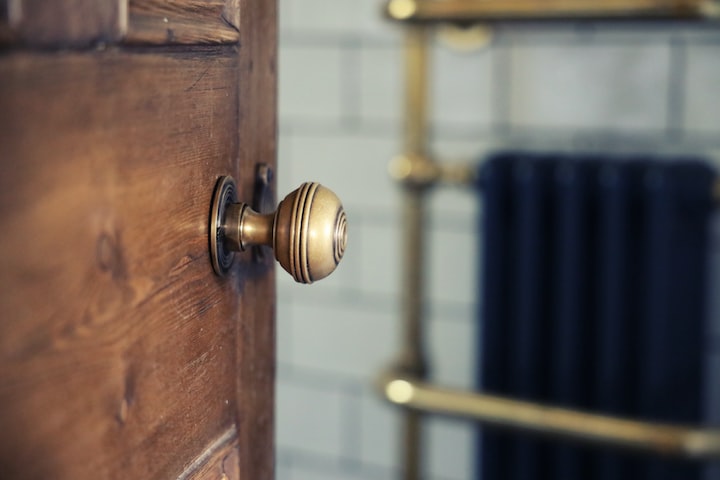 The anxiety courses through my body as I gently shut the door behind me. "Control yourself." I whisper, my hands coming up to cradle my head. "Don't have an attack over this. She's just a child, she doesn't understand. It will be okay, you'll have a better day today. You'll see." I close my eyes, clinging to those words. It's only 8 AM and my husband hardly left ten minutes ago to go donate plasma then head to his full time job. He won't be home until about 7:30 this evening. Since I'm the one off work today, the children are under my care and I'm on my own.

I look up into the bathroom mirror and stare at the woman in front of me. I hardly even recognize her anymore. Unbrushed hair thrown up in a bun, face puffy from nearly crying, dark circles under her eyes from lack of sleep and a look of defeat settling over her features so quickly it appears to have always belonged there. "Who am I becoming?" I ask myself as my gaze drifts down to my wrinkled tank top stained with formula. Just then a loud bang resounds from the closed bathroom door. "I want my blue dress!" Before I can react, the door opens and I'm staring into the angry face of my four year old daughter. As the bathroom door slams against the wall, a sharp wail sounds from the living room. Great, she woke up her sister.

Ignoring the angry child in front of me, I make my way to the living room where my four month old daughter is crying in her bassinet. "Elise, you woke up Elaine." But my words are drowned out by the baby's crying. "I want my blue dress!" Elise shouts, as she follows me into the living room, ignoring the comment about her sister. As I pick up the baby and bounce her in my arms, I put a pacifier in her mouth and look down at my older daughter, trying to keep the frustration from showing on my face. "I told you, I haven't had time to wash it. You wore it yesterday and we just woke up. No matter how much you scream about it, it won't change things." I explain for the fifth time that morning. Somehow those words finally click in her mind and she quiets down. "Fine." She grumbles, but then her face brightens. "Mommy, can I watch a movie?"

As the baby slowly falls back asleep from the bouncing, I turn on the television and play the first movie Elise picks. Once Elaine is back asleep and I sternly tell Elise not to wake up her sister again, I make my way back to the bathroom. The children may be settled, but my anxiety is not and I need a moment to myself. Why is it that every time I'm off work, the mornings always turn out like this? It makes my much anticipated days off feel like just another work shift.

Closing the door behind me, I quietly turn the lock and take a deep breath. Elise will come get me if she or her sister need anything. In the meantime... I drop the brave act and let the tears come freely. For once, I'd like a relaxing day off. Sleep in a little bit, drink some coffee while its hot, maybe watch an episode of the anime I'm currently going through, but no. Every day off work is kicked off with children screaming.

I look up into the mirror and laugh bitterly. The question I asked myself earlier returns to my thoughts. Who am I becoming? The answer is I have no idea. Before I had children, I felt so put together. Sure, I had normal stressors from work and school and I struggled like everyone else, but my time was my own. I could sleep when I wanted, go to the store when I wanted, exercise when I wanted, heck, I even got to eat when I wanted. I was on my own schedule. But the moment my firstborn entered the world, everything changed. Left was right, up was down. Everything was suddenly about her and it was like I no longer existed. I felt so out of control and I hated my life.

Yet, like every new mother, I overcame this difficult period. I adapted and I adjusted. I went back to work, made more time for hobbies and visited friends without my daughter around. Gradually, I began to feel human again and life settled into a new normal. When my second daughter made her appearance, however, I thought I was a seasoned mother and could handle anything thrown at me. I had gone through it all already, right? I knew how to make myself feel human. What I didn't take into account was the sheer amount of work two tiny humans created. Not only did I have the four year old's needs to attend to, now I had an entirely new infant to care for. Double the trouble, they often say. Even when I was working, I was often coordinating their lives in my free moments: doctor’s appointments, childcare schedules, family visits etc. Every fiber of my being went towards those girls and making sure their lives ran smoothly. Just as I was beginning to find myself again after the first one, it felt as if my identity was snatched away once more after the second.

Those thoughts at the forefront of my mind, I take another deep breath and slowly let it out. Wiping away the tears, I gently pat my cheeks and shake my head. Regardless of how I feel about my identity, I refuse to let myself mope the way I did when I was struggling after Elise’s birth. I was young then, overly ambitious and changing from one life to another. This time I merely had an addition to my workload, not a complete start over. It was hard, yes, and some moments really did make me want to give up, but instead of pitying myself, what I needed to do was find something that worked in my favor. No matter how much my job and those girls required me to do, I needed to make time for me to still be me. If there was one thing I learned from my first child, it was the importance of taking breaks and finding pocket moments for myself.

Yes, I struggled with my identity, but wasn’t identity strongly formulated by what a person chose to do? So instead of constantly thinking about who I was, I’d let those thoughts go and express through action who I wanted to be. If a person constantly thought about who they were, didn’t that make them less of a person because it took time away from doing the things that made them who they are? Sniffling, I pick up my phone and press play on the next episode of my favorite science fiction podcast.

Fake it until you make it, I think to myself. As the words stream out of the phone, I continue to deep breathe as the anxiety slowly begins to fade away. In place of the tears, a soft smile begins to form on my lips as I realize I have just succeeded in avoiding a massive anxiety attack, something that would have been impossible for the me of four years ago. Instead of feeling pity for myself and spiraling down over how hard my life was as a mother of two young girls, I merely let go of the whirlwind of thoughts to do something that strongly contributed to my identity - even if that something was as simple as listening to a podcast.

Standing up and stretching, I couldn’t help but think back to how the me from four years ago would have reacted. If only she had understood the significance of letting go, taking those five minutes away from the kids and just locking the door. If she had done that, maybe things would have been different. Maybe she wouldn’t have had to struggle so much. I think if she had known that, her identity struggle wouldn’t have had to happen. But no matter, all of that is in the past now. All’s well that ends well. If I hadn’t gone through that, I wouldn’t be sitting here in my bathroom able to tell this story.

Just a nerdy, coffee obsessed mother of two active daughters. Administrative work as a profession, but filled with dreams of becoming a published writer. Gamer, knitter, anime watcher, book reader, I love anything that will make me laugh.