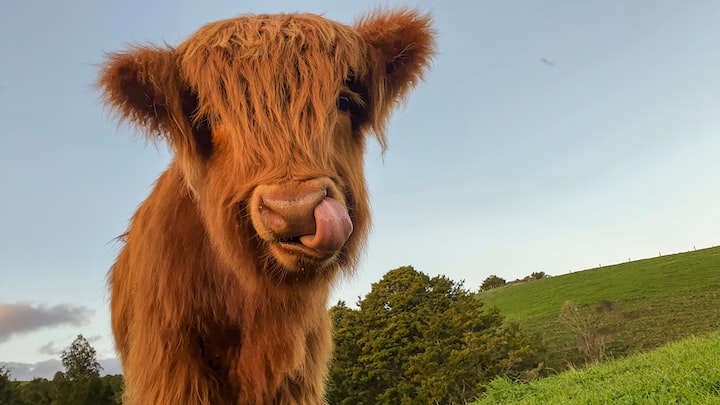 Photo by Luca Farmilo on Unsplash

There was a bull in the middle of the store. In aisle nine, amongst the cereal and oatmeal and pancake mixes, was a bull.

There were purple flowers growing from its soft brown fur, and it had branches instead of horns, but that was not unusual in Leafbranch, except for the fact that this was a bull, in Leafbranch, a small community town far from anywhere bulls would happen to be.

Edwin Almand, the owner of Leafbranch’s one and only supermarket, scratched his head, which had similar purple flowers growing from it.

“Well Ed, what are we going to do about it?” Fion, the store manager, asked, watching as the bull gently and carefully munched on a box of oatmeal. It stopped to look at the two men watching it, it’s large soulful eyes seemed to glitter in the green tinted morning sunlight that filtered in from the leaf covered windows.

“Awww!” Ed said before he could help himself and Fion nodded in agreement.

“Well I don’t feel too right about running it off, do you?” Edwin asked and saw Fion’s ponytail whip back and forth, the loose green strings of hair looked, more than most, like “regular” human hair but to the touch felt like fennel.

“No I don’t think we should run it off, but if someone needs to use this aisle…”

“Edwin, the mail is running slow this week and our universal income check is in it and I’m sure you may be in a similar situa- oh my goodness is that a bull!?” Dottie McLain leaned on her crutches to get a better look at the bull.

“Yes Dottie I’m afraid it is! We’re really not sure what to do with the little guy. Well, big guy I guess but well… look at him!” Edwin gestured to the bull, which got up slowly, to the surprise of all three present, and lumbered over, sniffing Dottie’s crutches.

She balanced on one crutch and reached a hand out towards the bull. The bull bowed its head and let her pet it.

“This is the best experience in my life.” She whispered conspiratorially. Edwin and Fion nodded. The bull nuzzled against her hand gently, as though it was aware that it was much bigger and could knock her over easily. The bull sniffed the air and moved gently away from Dottie, who put her arm back into her crutch.

The bull moved closer to Fion, nuzzling his sweatshirt and eventually working it up over its head.

Fion laughed loudly, louder than he meant to.

“No, no what are you…. don’t eat my binder!” He giggled and squirmed.

“What’s he doing, Fion?!” Edwin asked, shocked to see any aggression from this otherwise docile bull.

Fion was laughing and squirming too hard to really explain but he pulled the hem of the sweater up off the bull’s head so Dottie and Fion could see.

The pink, white and blue hem of Fion’s binder was being licked mercilessly with a wet and lightly scratchy tongue.

“It’s the salt on your skin, my boy!” He said, absolutely giggling at the spectacle.

Fion devolved into laughter once again and the bull’s eyes went wide and it continued to desperately lick the sweat and salt from his skin.

“M-make...hahaha make him stop… this is…. this is great but I can’t… breathe!!!!” Fion managed to get out between laughing fits and Edwin nodded, ambling over to the aisle with salt and combing back with a glass bottle of pink salt. He whistled at the bull, which removed its head from Fion’s sweater, it’s long tongue stuck partly out of its closed mouth.

Edwin poured some salt in his hand and stuck it on the bull’s tongue. Without changing expression the bull began to lick the salt off Edwin's hand.

Fion, who had tears in his eyes and was still laughing, cooed at how adorable the bull was, drying his eyes with his sweater sleeves.

The bull finished licking Edwin’s hand, looked around from Dottie to Fion and back up from Edwin’s hand to his face. It stepped closer, face to face with Edwin Almand. And licked him.

It then somewhat slid to the floor, laying on its stomach with all four of its legs sprawled out.

“Well…. we got it out of the aisle!” Fion said, still laughing.

“I suppose we did didnt we?” Edwin grinned. Dottie chuckled but paced back and forth with her crutches.

“Say no more Dottie! You know I make more than enough to thrive on from the universal income alone. You just take whatever you need. You helped enough getting the bull out of the aisle!”

Dottie chuckled and lifted a crutch to wave gently at the bull like one would with a cat. The bull followed the vine covered dark oak crutch with its eyes, apparently too tired to move towards it as it yawned and shifted to laying on its side instead.

Dottie, Fion and Edwin looked up at each other and laughed.

“Alright! I’ve got to pick up Emer and Farley, I know they can walk home on their own but I always want to know how their day at school was!” Dottie said placing her things on the checkout counter. She continued to chatter amicably and Edwin and Fion enjoyed listening to her.

“Farley has started their interest track now and they just get so excited and happy telling me about it! Oh and Emer is thinking about taking a year out of school to travel around and I want to support his decisions and be there for Farley too, since they’ve rarely been apart since Farley was born!”

“Oh a year out to travel sounds lovely for the young boy!” Edwin said as he began putting everything into leaf lined paper bags. “Now I’m just keeping inventory so don’t you bother with that total Dottie, I just want to be sure at the end of the month I know where everything went and that I didn’t get my orders wrong!”

He laughed and helped her load her groceries into her cart, which was an interesting thing, held together with logs and vines and caster wheels.

“Well I’ve got to go, I’ve got a doctor’s appointment to get to today as well!” Edwin placed a hand gently on her shoulder

“Now Dottie if that new doctor of your’s asks you for money you give them my number, alright? We’re not going to be having any capitalism in Leafbranch and I’ll be sure to let them know that alright?”

“Alright Edwin I’ll keep that in mind certainly!” She pushed the cart with her crutches up over the top of it the cart being enough to keep her steady and stable.

She was about to go out the door when she asked curiously, watching it sleep in the middle of the checkout aisle;

“So what are you going to do about the bull?”

“Well I might just keep him! Got any name suggestions?” Edwin smiled genially.

“Bora is a traditional Korean name that means violet, and he has a head full of violets, so maybe that?” Dottie was always happy to share her heritage with her friends. Edwin nodded, reaching up to brush his own violets from his face.

And what happened with the bull? Well that’s another Leafbranch tale, to be told at another time.

More stories from Cereal Oatmeal and writers in Fiction and other communities.