by Brenda Fluharty 10 months ago in Love
Report Story 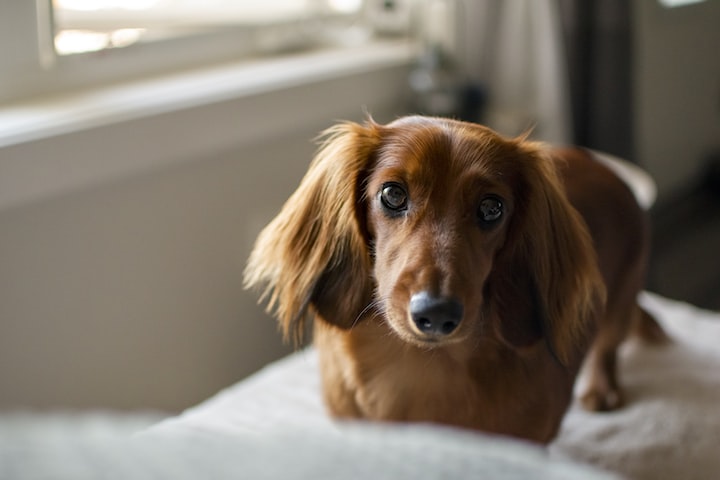 Photo by Nicole Tarasuk on Unsplash

I base this story on my beloved dachshund Leelee. Her love for chocolate was more human than a dog. Leelee is long gone, but still holds a place in my heart. She loved anything chocolate. Leelee was a chocoholic dog.

Leelee loved anything chocolate. We could not leave any candy lying around or she would run off with it. I mean this dog would practically kill herself to get chocolate.

One time I left peanut butter cups on a coffee tray because I had to go to the bathroom. When I came back. I caught Leelee in the act. She was trying to the peanut butter cup off the tray. I caught her in my arms just before her and the coffee tray fell. She would have gotten hurt if I hadn’t come out when I did.

The best of her chocolate adventures of Leelee, the contented dachshund. One Christmas I gave my son candy canes filled with peanut butter cups. Leelee decided they were not for my son. They were her peanut butter cups. My son did not mind sharing them with her.

Leelee, the contented dachshund, stole the candy canes and tried to hide them in her cage. Problem!! She could not figure out how to get them into her cage to hide them. My son tried to help her, but she growled at him. Leelee was the type of dog who loved everyone. She never growled at anyone unless she thought they were going to hurt my son. Leelee was very protective of him. She growled at him because she thought he was going to take her chocolate away. He was only trying to help her get the candy cane into her cage. Leelee did finally let him help her when I told her he only wants to help. She dropped the candy and let my son put the candy cane into her cage. She got in right after and buried it under her blanket.

No Birthday Cake for Me!

I was out, and my mother was watching my son at my house. I do not drive, so I needed my mother to pick me up. She had put my birthday cake on a coffee tray in my living room. She wanted it to be a surprise. Asking my son did he thought the cake would be alright until we got back. My son, only being seven, told her the cake would be fine. He knew Leelee like chocolate, but never thought she could get the cake. They left to pick me up.

You will never guess what we came back to!

My son practically drug me into the house. She was so excited for me to see his surprise. When we walked into the house, Leelee was nowhere to be found. I thought it was a little funny, but maybe she was deeply asleep.

We walked into the living room, finding the tray knocked over and a plate lying on the floor. There were pieces of cake everywhere. Leelee was in her cage fast asleep with my birthday card covered in chocolate in her mouth. I could not help laughing. I thought it was hilarious.

My mother said, “Are you going to say something?”

I said, “I Did not even get a slice of chocolate cake!”

We all started laughing.

I hope you enjoyed this fictional story about Leelee, the chocoholic dachshund.

Brenda Marie Fluharty is a freelance writer, blogger, poet and author.  Brenda specializes in spiritual healing, spiritual philosophy, dream interpretation, anything in the metaphysical field, and health and wellness essays and articles.

More stories from Brenda Fluharty and writers in Fiction and other communities.