I Was Not an Acrobat

by E.L. Martin 4 months ago in Short Story
Report Story 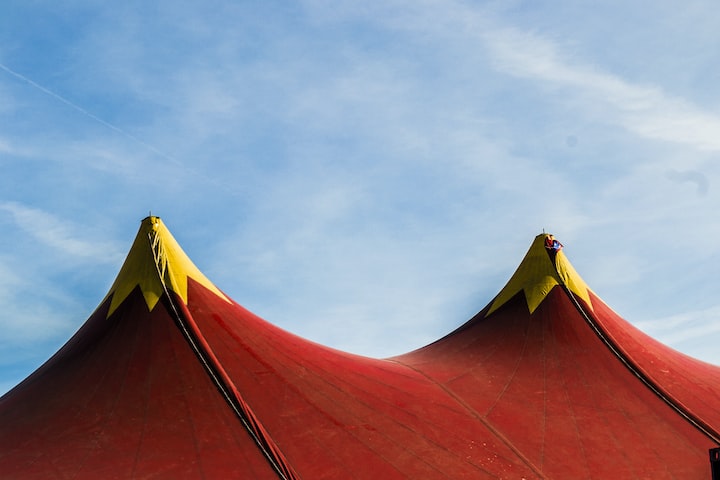 I stir from my slumber, and take a deep breath. The world feels like it is moving at a far faster rate than I am used to, but then again everything has felt like that since The Greatest Show on Earth came to an end. The train ride starts out like any other. People go on about their mundane lives. I'm used to traveling, but the sights I saw were never as special as the company I kept. Travel was fun with the comradery of my circus family.

Some of them were characters quite different from their job title. Many of those characters found employment elsewhere, and recovered quite swiftly. However, others were like me: their persona not so different from who they were as a human being. Those colleagues and I found the quest for the similar joy we had experienced unlikely elsewhere. Still, some of us try.

Rand joined the rodeo. Jess joined up with an amusement park. Jeff made off by travelling to carnivals. As for me, I took this train. I am not yet ready to move on. The rodeo is not my place. An amusement park is not my forte. Carnivals are a young man's gig, and not enough to live on. I have trouble letting go of the past: A past that for me was most fulfilling.

We had it all under the Big Top; friends, family, excitement, fun, and happiness. We were included and alive. We lived and enjoyed life to the fullest. Sure, we had hard times; but the good times were all the more worthwhile. We belonged; we had each other. Being out of that environment, thrust into the regular world, made me realize why the circus was so important. People needed that get away. They needed somewhere they could go to laugh and forget their troubles for a while.

I considered the same types of escapism. I still believe that laughter is the best medicine. I considered a career in comedy; however, comedy only goes so far before things become too political. You find your niche and must adhere to a specific audience. I found that aspect distasteful. Call me crazy, but I want to include all people. I want to bring happiness to them all.

I understand that social media and influence is of utmost significance in this modern time. Unfortunately, I don't want to keep up with social media. I don't want to have to market myself, and I don't want a talent company to restrict me. I prefer improvising. After all, I was once accepted for that improvisation. I didn't need to draw crowds to the show; people came willingly. I didn’t have to convince someone to enjoy themselves. Some might say I'm old-fashioned. Others may consider me lazy. I know I'm outdated at the very least. I know that I and my kind are unquestionably outdated if The Greatest Show on Earth came to an end. Maybe that should inspire me to change, but I don't want to change. I don't feel that there is anything wrong with the life I had chosen. The circus life was absolutely the life for me.

Like I said, I had one dream: to join the circus and bring people joy.

I am awakened from my murmurings and contemplations to stir once more, and for the first time I notice my surroundings.

I hear confused and panicked people, the grinding of train tracks, and brakes squealing. I smell something burning; not like a fire so much as an electrical stench.

What is all that commotion?

I take a look around me, and peer into the other train cars separate from mine. People are frantically pushing each other. Some are trying to climb out windows. A few succeed only to be plunged to their doom.

I'm sure some will survive. You can always count on stories of miracles, but you can't count on that miracle to be you. I think to myself for a moment, “Would I even want that miracle?” Surely staying on this track will get you killed. Doing nothing is still making a decision after all. Funny how this old world works isn't it? Indecision is still a decision. I find it sickeningly unusual how I can still be thinking about my old life at a time like this? Maybe I can’t let go because it was so meaningful to me. It is part of who I am as a person: my identity. Is this what it means to have one’s life flash before their eyes? I always thought it would be different. Still, I think, feel, and believe the same things, and I remember my promise to myself.

It is now that the light at the end of the tunnel comes into my view. This light makes my vision clear.

I succeeded in that dream. I look around at the many people on board this train; clearly not ready to die. Their life's missions are left incomplete and unaccomplished.

What was it that they wanted to do? Did they want that office job working 9 to 5? Did they want to start off this train ride on their business lines chattering and venting away about issues going on in their offices or handling corporate complaints? How miserable would that be?

Some have families, of that I am certain. Families I'm sure they wish they would return to; families that I hope by some miracle they can return home to. I see a few children clinging to their parents. Their lives would be cut far too short to end here; so many life ambitions in their young minds.

I consider for a moment how many simple things make those children happy: Things that I, myself, identify with. I made a career out of being a circus clown. I had a family; my circus family. I had it all. Just because the Big Top went down doesn't mean I lost it all, and it doesn't mean that my time there was any less significant.

It is true that at present I am an unemployed circus clown. I was not an acrobat. Unlike the acrobats, I was not fortunate enough to move on to other methods of entertainment. I lacked skills to survive any of the new forms of circus, so my future was uncertain. Circus clowns can be found fairly easily. I may not be marketable, but I am needed. My employment this time will be voluntary, and will come without monetary pay. The only compensation I will receive is easing the burden of this crowd’s minds, and perhaps be lucky enough to get a laugh or two. It will mean all the more coming from the children. I may be unskilled, but I am talented. I am talented enough to bring people joy, and right now this place needs joy.

I'm not getting off of this train. I'm unlikely to survive this, but that makes my future all the more certain. For the time I have remaining, I decide to put on a show: "The Greatest Show on Earth." I’ll have my old time, one final time. I carried in my suitcase my deck of cards. My props and tricks will come in handy. I now know the reason why I could not give up or let go.

That dream I have accomplished until the very end.