How Grown-Ups Say, "I Love You"

Sometimes our first love can also be our last... 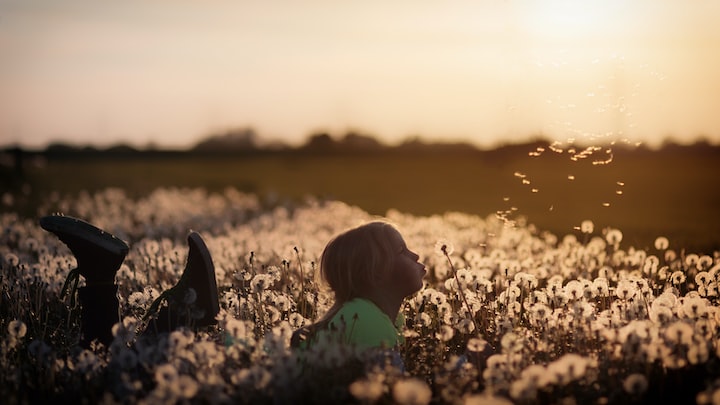 His name was Antwon, and he was the boy next door. He was two years older than I, but we had always been the best of friends. One night when our parents were having dinner together, Antwon stole an abandoned glass of Merlot from the kitchen, and the two of us snuck outside and tucked ourselves away in the tree fort in his backyard.

We sat together with the moon shining down on us, each daring the other to try the wine first. He took the first sip and smiled at me and said that it tasted like Kool-Aid. I believed him and took a big gulp out of the glass as he laughed at me. It was bitter on my tongue, but I wanted him to think I was grown-up, so I lied and said that i liked it. We spent the rest of the night taking turns until the wine was gone and laughing.

Much to my disappointment and fear, our parents eventually found us, and as my father dragged me away, Antwon ran over to me and gave me a single dandelion. He kissed me on the cheek and whispered into my ear, "that's how grown-ups say they like each other."

I giggled and waved goodbye to him, knowing that I would pay for it when I got home. But I didn't care. It was the best day of my life.

My father punished me severely that night, and I was forbidden to see Antwon. But for the rest of that summer, after my father left for work, I would sneak away and spend the day with my friend. It was the best summer of my life.

I lived in fear of the new school year, though, knowing that he would be transferring to the high school and leaving me behind.

On the last day of summer, Antwon gave me a dandelion and kissed me on the cheek. He said to me, "that's how grown-ups say, 'goodbye.'"

He became a star basketball player, and I grew accustomed to being on the periphery of his life. I saw more of him after I started high school, but I dreaded the day that he would graduate and leave me behind completely.

When the day of his graduation came, I worked up my courage and pushed through the crowd to say goodbye. When he saw me, he smiled and gave me a big bear hug, whispering into my ear, “I’ll really miss you, Jilly Bean.”

I handed him a card. Inside, I had placed a single dandelion and written a simple message:

Before he could read the card, I kissed him on the cheek and whispered, “it’s how grown-ups say 'goodbye.'” I walked away with tears in my eyes.

I only saw him a couple of times over the next two years, and I focused on my studies, graduating at the top of my class. I was awarded a full scholarship and enrolled at the same university he attended.

My first semester was difficult, and for the first several weeks, I was only able to catch glimpses of him from the bleachers at his games or when I chanced upon him and his friends in the Quad.

I would watch from a distance, hoping that he would notice me, but I would inevitably leave disappointed, cursing my own timidity.

Late in the semester, though, as I was studying at a table in the back of the library, someone rested their hand on my shoulder, startling me. I looked up into Antwon’s smiling face.

I threw my arms around him, elated that he had finally found me.

He hugged me tightly before sitting down with me. “Why didn't you find me and tell me you were here?"

I shrugged and chuckled nervously. “You know, you’re kind of the King of the Quad…”

He laughed softly at me, "Still the same old Jill, huh?"

His voice softened. "Let's go get some coffee and catch up, huh?”

I hesitated, and he smiled at me. “Come on, Jilly Bean. I missed you. Please?” He asked playfully.

"Well, you know I can't resist that," I said, laughing.

We quickly fell into our old rhythm, and I was reminded why I loved being around him so much. He had a natural ease that I found both comforting and contagious, and he had always known how to make me laugh.

I still thought of him as the goofy, sweet kid that had given me my first kiss and shared a glass of wine with me, and he was in many ways, but he had also grown up. I was pleased with the man he was becoming.

We sat in a quiet corner of the Quad, talking for hours. It was the first time in years that I had felt truly content, and I was dismayed when his friends found us.

He introduced me to everyone and tried to include me, but I felt out of place and excused myself. I smiled at them and placed my hand on his shoulder as I stood. “It was really good to see you, T."

As I walked away, I could hear his friends asking him about me, but he called my name and ran over to me.

“Jill. Wait.” I turned to face him, and he gave me one of his bear hugs. “It was really good to see you too, Jilly Bean. Don't be a stranger anymore, okay?”

I smiled at him and nodded my head obediently. "I'll see you around the Quad, Antwon."

The next two years went by much the same. I spent most of my time alone in my studies, but he would occasionally surprise me in the library or at my dorm with food. He even convinced me to hang out with his friends a few times.

His last semester was different, though. He had a new girlfriend who did not welcome my presence, and he was busy with exams. He had already accepted a job in the city, and I again feared being left behind.

I pushed through the crowd on his graduation day, much as I had four years before. When he saw me, he smiled and wrapped his arms around me. I felt the world fade away and tears fill my eyes as he held tightly onto me.

Before he let me go, he whispered into my ear. “I’m really going to miss you, Jilly Bean.”

I stifled my tears as he released me and smiled, handing him a card. Inside, I had placed a single dandelion and written a simple message:

As he took the card from me, I stood on my tiptoes and kissed him on the cheek.

“It’s how grown-ups say 'goodbye,'” I said, forcing a smile. I slowly turned away as tears fell down my cheeks.

The next two years were a blur of classes, studying, and tests. He and I texted and talked on the phone, but I rarely saw him, and my graduation day came and went without a visit from Antwon. I was disappointed but not overly surprised.

I had accepted a job in the city, and he promised to visit me soon. He sent flowers to my office for my first day of work and called me a few times to see how I was doing in my new apartment, but it was a couple of weeks before he visited.

I was unpacking the last of my boxes when he showed up at my apartment one late Saturday night. I threw my arms around him, relieved to finally see him. "Hey, T."

He set down the bag he was carrying and wrapped his arms around me. He held onto me more tightly than he ever had before. He smelled faintly of soap and cologne, and as he pulled away from me, I noticed his hands lingered around my waist.

"Hey, Jilly Bean." He spoke softly and smiled nervously, as he retrieved the bag. I could not recall ever seeing him nervous before. As we stood and looked at each other for a long moment, I also sensed an intensity to him that I had also never seen, and my pulse began racing in expectation.

I finally caught my senses and motioned him inside. I watched in wonder as he withdrew a bottle of Merlot from the bag, displaying it for me to see. It was the same wine that we had shared twelve years before.

"Remember?" He asked me softly with a hopeful smile.

I nodded my head slowly, smiling. He set the wine down, and my eyes widened as he returned to me, holding a bouquet of dandelions.

He rested them against my chest, and I nibbled my lip as I wrapped my fingers around the stems.

I never saw them in the city and asked him where he found so many, gasping softly as he wrapped his long, dark fingers around my thin, pale wrist and gently pulled me against him.

“It wasn’t easy,” he said grinning.

“Thank you,” I managed, my breath catching.

"You're welcome," he said, still holding onto me.

We stood together for a long moment with only the dandelions between us, before he slowly released me.

"I'm sorry I missed your graduation, Jilly Bean. I wanted to be there."

I shrugged, waving my hand. "It's okay."

He removed a card from his back pocket, nodding for me to read it. I laid the dandelions down and opened the card.

Inside, he had written a simple message:

He moved closer to me as I read, and I could feel his breath on my face as he reached up, wiping a tear from my cheek.

I spoke softly, overwhelmed. "You were there for me, Antwon. It wasn't fair that I expected you to always come to me. I should have tried harder to--."

"No, baby girl. You did try. Besides --" He spoke slowly, carefully, "I always knew what it was like for you... growing up in that house."

I looked away as my cheeks flushed. We had never talked about it before, but I should not have been surprised that he knew. He had lived next door for eighteen years, after all.

He gently turned my face back to him. "I was around but not the way you needed. And I took it for granted that you'd always be there."

He paused, holding my gaze. "I didn't realize that I needed you, too. But I do, now."

He cupped my face in his hands, lifting me gently, and kissed me on the cheek.

“That’s how grown-ups say they like each other,” I said, sniffing.

He smiled at me like he had twelve years before and wrapped his arms around my waist, pulling me tightly against him. My stomach fluttered as he leaned down and, then, for the first time, he kissed me on the lips.

We stood with our chests rising and falling together as he whispered into my ear, "And that's how grown-ups say, ‘I love you.’”

❤ Author's final note: Thank you for taking the time to read my story. If you enjoyed what you read, please click HERE for more, and don't forget to LIKE, SHARE, & SUBSCRIBE! Tips are Always Greatly Appreciated!❤

Check out another one of my short stories below!

Look below for one of my favorite poems!

❤ Click HERE To Check Out My Main Profile Page! And As Always, Thank You - For Reading & Supporting My Work!! ❤

More stories from Lena Bean and writers in Fiction and other communities.