by M Foo 2 months ago in Short Story
Report Story

A historical fiction tale, set in the days of Danes and Saxons 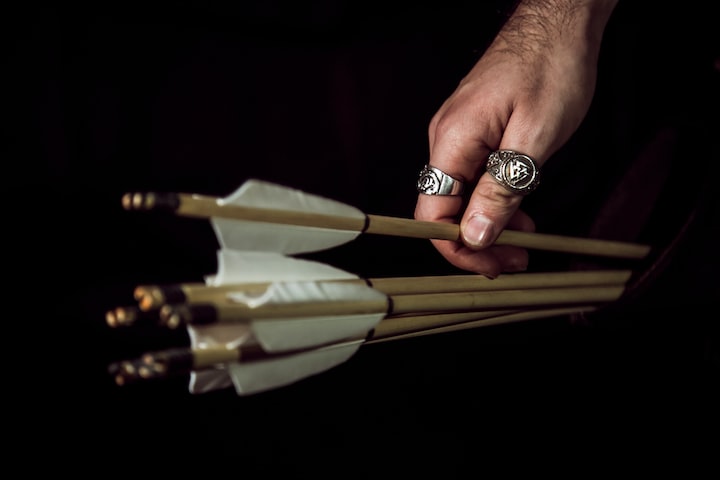 Photo by Gioele Fazzeri on Unsplash

Fraying burlap scratched the Dane Osrung’s face as the bag was pulled from his head and light returned to the world.

He knelt on weathered stone, in a great hall made entirely of the same. Iron sconces on the walls held torches, and their flickering light struggled to make up for the lack of windows. Dark wooden tables lined the sides of the room, covered in scorch marks from drifting embers and drenched in ale spilled from mugs in the hands of feasting king’s men.

They ate too properly, these Northumbrians. Each man held shiny implements—some with points on the ends, some like shallow bowls, others like children’s knives—and used them on their food. They cut, stabbed, brutalized their food. Left hardly any work left for their teeth. They dined with pomp and ceremony, hoping to impress the very man Osrung had come to see.

Ten paces before him and up a few chiseled steps sat a heavy iron chair, and on that chair sat a heavy bearded man, and on that man sat a heavy golden crown. It seemed to be one solid piece, though separate strands of sparkling gold danced and intertwined like serpents in a nest.

Osrung lowered his gaze to the two beady eyes sunken into King Ælle’s pudgy face. They glinted and lines appeared at the corners of the king’s mouth. A deep voice rumbled through the room, and the sounds of the feast promptly ended.

“Osrung Far-Sight,” Æelle said, his jowls quivering. “Well met. I welcome you to my hall.”

“Why have you come, warrior of Ragnar?” Æelle leaned forward hungrily, his forearms on his knees. A fat pink tongue flicked out to wet his lips. “Has your king sent word for me? Perhaps more threats?”

Osrung lifted the sleeve of the mud-caked skins he wore, baring his right arm. Still, he remained silent.

Inhalations sounded from men at tables on both sides of the room but Æelle only squinted and leaned further forward. A steward in the king’s blue and green stepped forward and whispered briefly in Æelle’s ear.

“Ah, you no longer wear the arm-ring.” The king swung his head around the room, a throaty chuckle escaping his lips. “Tell me, what severed your loyalty to the great Ragnar Lodbrok, Earl of Earls, King of Kings?” At that his chuckle turned to outright laughter, venom dripping from each exhalation as his men-at-arms joined in.

The warriors’ laughter halted, caught in their throats, but Æelle only laughed all the harder. Osrung’s upper lip twitched, his hands clenched and unclenched. After a minute Æelle’s laughter ended with a fit of hacking coughs, after which he turned his head and spat mucus.

“I wish to join your army, king, and one day put an arrow through his throat,” Osrung continued. “I seek vengeance.”

At this the king heaved his great weight from the throne and stood at the top of the steps. He seemed to look down on Osrung from a height insurmountable. “Vengeance is a young man’s game, Far-Sight. You are not in fighting shape any longer.”

Osrung got his feet underneath him and began to stand. His knees were still half bent when warriors sprang from their tables and unsheathed their weapons. He held his hands out in front of him and slowly straightened.

“Your men here seem to disagree, king.” Osrung spread his arms out, taking in the whole of the hall. “They remember how well I fought not two seasons past.”

Æelle eyed Osrung, glint still in his eye. He waved his thick hands, and the warriors returned weapons to sheaths and buttocks to benches. Slowly, the king descended the steps, coming down to the same level as Osrung himself. He walked forward, stopping just before the Dane.

“You are useless without your bow, Far-Sight. You could not duel the Ragnar even if you were twenty years younger.”

“I do not seek to duel him.” Osrung lifted his chin. “He killed my son without honor, forbade him entrance to Valhalla. I would do the same in return.”

Æelle’s head dropped, his eyes narrowing. “And how could I trust you with your bow among my men?” He turned and lumbered a few steps away from Osrung. “As you yourself said, you killed many of them this past spring, most from far enough away they had no chance to defend themselves. I would not invite a wolf into my pastures, nor would I invite an enemy archer to a position behind my army.” He met Osrung’s eye and pointed at the Dane’s chest. “You must prove yourself loyal.”

“Only tell me what I must do, and I shall do it,” Osrung said. “Name your price, king.”

Æelle reclimbed the steps and mounted his throne once more. “Leave it to a pagan to break an oath of loyalty and still believe someone will trust him swearing another,” he said offhandedly. A low, guttural sound came from somewhere in his throat. “But a precedent has been set,” he said to Osrung. His arm shot out to a man dining below. The warrior stood, his chainmail crunching as he did so.

Osrung studied the man. He wore heavy black boots of a style completely unfamiliar that reached up well past his knees. His head was covered in a ratty cap and he had a long, twisting growth of hair above his lip. On his hip was a dark scabbard and a smaller leather sheath. He stalked up the steps to the king and kneeled before the throne.

“My liege,” he said with a lilting accent. “I am yours to command.”

Æelle chuckled and touched his hand to the kneeling man’s head. “You need not be so damn ceremonious all the time, Bourbois, as much as I do enjoy the attention.” Æelle shifted his focus back to Osrung. “Bourbois here is, ah…”

“Francian, my liege,” Bourbois filled in.

“Aye, Francian. A few years back his people landed on my shores, just as you Danes did, though they had the good manners not to start a war. Bourbois here was given to me, as a symbol of peace and goodwill. Bourbois, did I believe you were loyal to me at first?”

The Francian shook his head slowly from side to side. “No, my liege.”

Æelle continued. “No, I didn’t. Bourbois, show the poor Dane with the poor murdered son how you proved your fealty.”

Bourbois stood and marched to Osrung, his pace precise, his posture rigid. Osrung lifted one eyebrow at the man and stifled a laugh. When he reached the Dane, Bourbois lifted his left hand and removed the patched leather glove upon it.

His ring finger was missing. A stump of mottled purple and grey skin remained where it should have been. Bourbois then reached to his throat where a braided thong disappeared under the front of his armor and pulled. The end of the thong was tied tightly around the middle knuckle of a decaying digit. The smell of dead flesh hit Osrung’s nose and he struggled not to look away, but his eyes remained fixed on the morbid display.

“The funny little Francian tried to gift it to me after he sliced it off,” Æelle said, smiling fondly. “I told him he should keep it, and now he won’t take the damned thing off. Bourbois, boy, put it away now.” Bourbois did, and returned to his position at the king’s side.

Osrung studied the ground. “A finger is a hefty price for the revenge I seek, king, but it is one I will pay if I must.”

A tsk came from the king. “You misunderstand, pagan.” Æelle gave a wolf’s grin. “As I said, his people did not start a war with mine. Bourbois never fought me, never killed my men. You did.”

The king gestured, and his men-at-arms stood from their benches and bared their steel once more. They moved, forming a half ring around Osrung, blocking his way out of the great hall, funneling him towards their king. Again, Æelle held his hand out to Bourbois, and steel rasped as the Francian drew a wickedly curved knife from the sheath at his hip. He proffered the bone hilt to his king, and Æelle grasped it as he stood and once more descended the steps.

“His price was a finger, yes, but you are Osrung Far-Sight. A heavier toll is called for.”

Osrung’s legs shook, his heart thundered. “And if the toll is too heavy to be paid?” he said.

Æelle’s throaty chuckle spelled doom. “You are far too dangerous an enemy to let go, Far-Sight.”

Osrung’s mind raced. He saw his boy, laying in a pool of his own blood, his throat cut from ear to ear, Ragnar standing above him. He saw Ragnar from a great distance riding through a village of mud and huts. He saw his yew bow, an arrow’s steel tip glinting in the sun, fixed on the Dane king’s shadowy form. And he saw that same arrow through Ragnar’s throat, no axe in his hand, no chance at Valhalla’s salvation.

No price was too heavy.

“Name your command, my liege.” He heard his own words as if they were someone else’s.

And Osrung One-Eye was born.

More stories from M Foo and writers in Fiction and other communities.