Her Most Magnificent Flower

by Nicole Caggiano 3 months ago in Love

You blossom with love and light. 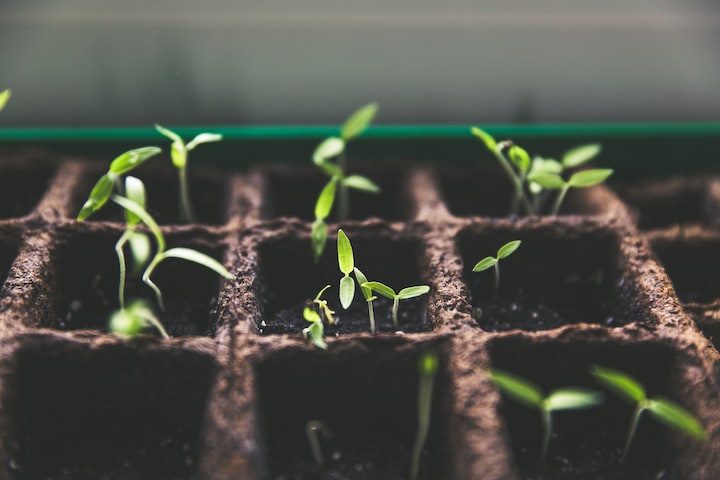 Her earliest memory was of her tiny fingers deep in cool earth, planting bulbs, next to her mother, their backs towards the sun, shoulders turning a bright pink. Birdsong could be heard in the trees, and if they were lucky, a small breeze would dance through the air, cooling the sweat that gathered along temples and brows, down their backs and necks. Barefoot, in well worn jeans and straw hats, they’d tend to the garden, prune weeds, water and plant new flowers for the next season. They would turn in only once the job was done, a good kind of ache deep in their bones.

It was their time together, and Violet relished every minute of it.

Her mother would sing or tell stories, speaking to Violet and the flowers and plants, too, believing that every living thing craved and thrived off connection, openness, and love. It was something that belonged inherently to her mother, this pure gift of care and the desire to leave the world more beautiful than she found it.

The two shared their gift for mind magic, but it wasn’t until Violet’s fifteenth birthday that she showed the propensity for earth magic as well. They were in the garden, wrist deep in soil, when Violet managed to get the marigolds to bloom in a matter of seconds. Once her fingers touched the bulbs, she felt the slightest quake in the root, and her body responded in kind. She followed the call and soon the plants grew towards the sky and vivid, orange flowers burst to life.

“My marvelous girl,” her mother cupped her cheeks and tapped Violet on the nose which earned her a laugh. They went back to work.

Three weeks later, her mother caught a cold that settled deep in her lungs, the coughs she’d release raucous and painful, and nothing seemed to get them to abate. Despite all the honey tea and medicine, it never got better. Two weeks after that, Violet lay tucked into the crook of her mother’s arm, listening to the rattle in her mother’s chest.

Her mother was gone a few hours later.

When they laid her to rest, Violet wanted to lay a wreath of marigolds on the tombstone, so she went out to the garden shed and placed a dozen bulbs in fresh earth, dipped her fingers in and waited.

Nothing called back to her like before; now it was a vast space of silence. Violet pulled her hands from the dirt, and sank back on her feet. Her heart was too broken.

That following fall she started school, the excitement at being selected to attend Baxter High, a renowned magical prep school, was dampened by the loss of her mother, which still sat heavy on her heart. During the first week, Violet met Sawyer and Finn, the three having been paired together during classes.

The two boys shared a suite, and had a rapport Violet was jealous of, the two melding with one another so effortlessly, it was a stark reminder of how closed off she kept herself. Sawyer had bright eyes, a cracking wit, and a smile that, every time directed towards her, set birds loose in her chest. Finn was incredibly intelligent, kind, and had a sense of humor that on more than one occasion, surprised her to the point she’d find herself gasping for air.

One day, after a rather torturous class, the boys invited her to sit with them at lunch. She was hesitant, but something pushed her to agree, and every day after that, the three would spend more time together.

They began to fill in her broken pieces, and eased some of the pain in her heart.

One afternoon, Finn pulled Violet with him to the greenhouse. “C’mon,” he widened his eyes and drew his lips into a frown, “please?”

It was then that Sawyer came up to the two. “You both look dreadful, what’s going on?”

“I’m helping plant some bulbs, and I asked Violet to keep me company,” he turned to Sawyer, “and I’m certain she was going to say no but if you join me...” His eyebrows bounced up and down and Violet felt a blush crawl up her neck.

“I’ll go.” At Violet’s wide eyes he added, “it's pretty impressive to watch him work, and I like the company.”

Finn ducked his head at the praise, pushing his glasses in place, while Violet felt a tidal wave of emotion at the offer: nervous, scared, and grateful. She agreed.

The moment she entered the greenhouse she had to steady herself. It was warm, though not uncomfortable. Violet could feel the moisture in the air as she ran her hands along her jeans to dry the sweat from her palms, and tried to steady her heart. Finn, obviously comfortable in this space, headed straight for a tower of clay pots.

Sawyer went to help place them in rows, while Violet took in the rest of the space. There were ferns, marigolds, geraniums, and succulents scattered around the room with long work tables, and as she ran her hand along one of them, she could feel the gauges made by scissors and gardening tools. Tears stung her eyes and she took quick breaths to keep them at bay.

She shook her head. “I’m alright here, you two have fun.” Turning back to where she dropped her bag, she pulled out a book and settled into a chair, but her eyes stayed on the two boys and the dirt covering their hands.

Sawyer would place himself along the side of the table that faced Violet, giving him a clear line of sight to her. He brushed his hands together then wiped them along his pants as he cleared his throat. Finn looked up.

Finn looked over his shoulder at her, then back to Sawyer, his eyes sad, “she wants to but she won’t let herself.”

Finn hummed, “just like someone else I know…” he smiled and then it fell from his face. "It's something else, though. Deeper."

Sawyer’s eyes never left Violet, he only nodded, then made his way over to her. She startled when he sat next to her, his body a line of heat along hers. “It doesn’t take a mind fairy to know that you want to help. I just can’t understand why you won’t let yourself.” He tilted his head, brown eyes kind and concerned, “Finn’s been making up things just to get you in here. We know how much you love being outside, and I’ve caught you staring at the gardens more times than I can count…” he ducked his head realizing his admission and blushed.

Violet smirked, an eyebrow raised. “So you stare at me while I stare at the gardens?”

“Seems we both appreciate beauty.”

He placed his hand on hers, “you can tell us, Vi.”

Violet knew he was right, it was time. “Finn should hear it, too,” her voice gravelly and soft.

She called Finn over and he sat on the other side of Violet, the two boys boxing her in, and she realized for the first time since the loss of her mother, that she was safe and warm, loved even.

Violet told them about the afternoons spent in the garden, of her mother’s laughter and stories, and the day Violet discovered her earth magic. She didn’t cry, instead, she felt as though she could breathe easier for the first time in over a year.

She sniffled, “I haven’t used earth magic since,” she shrugged, “I tried shortly after she was gone and…” Violet shook her head, “it wasn’t there.”

“That’s not how magic works, Vi,” Finn said, dipping his head to catch her gaze, his voice low and gentle, “it’s innately yours. It’s always there, waiting for you.” He turned to face her, “why haven’t you tried?” His voice held no accusation, just concern.

She felt Sawyer slip his hand into hers, their fingers intertwined, “we’re here.”

Finn slipped his arm through hers, “three things,” he held up three fingers, “and then we’ll never bring it up again.” He sighed, “one, you will never have to do this or anything else alone unless you wish it.” He held up two fingers, “two, I think it’s hurting you more to not do it, and not feel that connection to her,” he held up another finger, dirt smudged around it’s tip, “and three, you can do anything. I’ve seen you and I’ve gotten to know you and you’re incredible.” Finn pursed his lips together, smiled, then shrugged. “No matter what you decide we’re here.” He nudged her, “we’ll always be here.”

He stood up and gave Sawyer a nod, before heading back to the work table. Sawyer gave Violet’s hand a squeeze and stood, his hand almost free from hers before she gripped it tightly. “Wait…” she stood, and before he could release her hand, she tightened her hold, “thank you.”

He kissed her cheek, “you never have to thank me,” he said with a smile, and pulled her towards the table.

Finn jutted his chin in the direction of the empty clay pots, “you can fill those with some soil and place the bulbs inside, I’ll handle the rest.” He gave her a wide smile then winked. She followed Finn’s instructions, and realized that he gave her a task that wouldn’t require magic, easing her back into this world she loved so much.

The three of them worked, the space filled with their laughter and stories, and when Violet returned to her suite later that evening, and washed the dirt from her hands, she felt happy.

The days following the afternoon, Violet became more bold, opening herself up to the magic that was within her, until one day, she felt the call of the flowers in the pots, and she gave herself over to the magic, trusting in it and herself.

She got the marigold to bloom.

Sawyer ran around the side of the table and lifted her into his arms, her feet sailing through the air as he spun her around. “You are magnificent,” he laughed, settled her feet back on the ground, and kissed her.

She opened up for him, his lips gentle as he kissed her. Violet felt the room fade away, the only thing keeping her tethered to this moment was Sawyer.

Finn cleared his throat beside them, and their spell was broken. “Well,” he said, the smile obvious in his voice, “that took much longer than expected and…” he trailed off, and gestured at the clay pots lining the table, which now held fully formed flowers.

Violet couldn’t tear her eyes away from the plants, though she felt Sawyer brush a strand of hair behind her ear, then took her hand in his. Violet heard her mother’s voice in her head: “keep yourself open to the magic around you...keep yourself open to love and light, my darling.”

She let her eyes wander to Sawyer, and then to Finn: love and light.

High school English teacher who enjoys writing, reading, being out in nature, a cold glass of white wine, and a charcuterie board.