by Aibee 4 months ago in Short Story

A place for creatures small and unseen 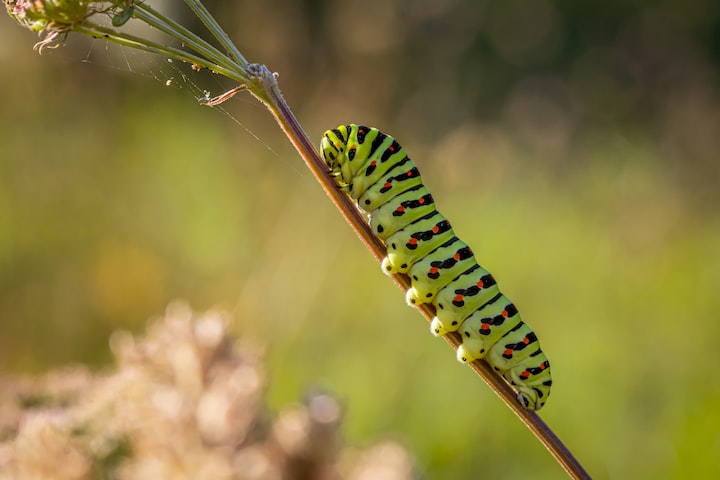 A chubby caterpillar stumbled down a leaf. Hayoon watched it lurch forward, sending ripples through its thick green body. Feeling the sun’s warmth on her back, she sat contentedly in her favourite place in the world. The backyard was a microcosm where she could escape from the house without getting in trouble. Small, unseen creatures would creep out of their crevices to celebrate the day to come. Lizards with glowing backs slipped around the brick walls, snails sloshed forward on the stone floor and bees bounced through the botany.

Bare feet slapped against the ground as jiggly marshmallows for legs dashed toward me. She was determined. Her fists clenched beside her as her mouth hardened into a firm line.

“Let’s catch some water aliens!” She swung the glass jar in her hand as she strode to the pool.

The pool. Hayoon had always steered clear of that dark green mass of swirling sludge subsisting in the middle of her wonderful garden. She knew deep beneath the slimy surface of leaves and algae resided a vicious, razor-toothed leviathan. One regretful glance at Jaws re-running on the television and it was over for her well-rested sleep and swimming lessons. Many nights were spent wide-eyed and huddled in blankets, after waking from her recurring dreams of the shark. She told me the dreams were always the same, she strolled through the garden and noticed a ripple in the pool. Despite her better judgement, she stood at the edge and leaned in to get a better look. Then suddenly, rows of bloody fangs sunk into her ankles and pulled her down into the depths.

Despite this fear of hers, she insisted I help her scoop out new insects she had noticed in the pool. Somehow, galactic creatures called “backswimmer insects” had arrived in the dark of night, invaded the area and built a small empire. My sister and I - as part of the United Federation of Planets - were going to inspect their features and discuss their place in this world.

Liquid swelled into the bottom of the jar. It was a deep green as if the water itself contained the darkest forests. My forearm had disappeared into the pool.

"No, don't put your arm in the water, just use the jar to scoop the top." She tugged on my sleeve.

"I can't catch them that way" I ruffled her hair.

Hayoon held her breath. It was in this moment, as I dangled my appetising arm as bait in the water, that she prayed I wouldn't be eaten.

“There’s one!” And with a swift, fluid motion, I enclosed an alien within a glass prison.

Then, I poured the contents into a larger plastic bucket. She was puzzled, either the Shark was deeply asleep or didn’t have a taste for teenage boys.

With an unrivalled eagerness to explore the unknown, Hayoon was to scout for their most populated areas and report back. As her first officer, I was to catch every alien she commanded me to. Throughout the day she ran around the rim of the pool in excitement, chasing after the larger - and therefore more powerful aliens. Suddenly, she spotted the patriarch. The paunchy ruler hid within a crack in the wall of the deep-end. Cleverly, he rested just out of reach.

My fingers gripped onto the pool’s stair handrail. The glass jar sunk deeper, the white shirt on my shoulder dyed a camouflaging green. A centimetre within grasp, the alien taunted. There was a gasp. In a swift motion, I pushed my whole arm into the water. Hayoon screamed.

“Don’t worry it’s alright” I chuckled. There was a disgruntled kingpin swimming around the cell of palm. I sauntered to the bucket.

We had come to a few conclusions after extensive analysing. These backswimmers were thin, bug-like creatures which did in fact swim on their backs, using their two arms as propellers. They could bite, but it didn’t seem poisonous. My little sister had painful red spots staining her hands after trying to handle them in the bucket.

It was a fun day of discovery. The bucket was fascinating to watch as the whirlpool of galactic life zoomed past each other in our research institution. As the sun began to fall behind our brick walls, it was time to pour everything back and restore peace; to return to headquarters for a hearty dinner and some movies.

“You know if you leave them in there for long enough, they’ll eat each other and the biggest one will be left” Hayoon’s stony expression formed a maniacal grin.

“How boring. The fat one bit me, he’s declaring war!” She swiped her hands at the bucket with determination.

“That’s enough, Hayoon” I pulled at her elbow.

She clasped the largest bug in her palms.

“Stop!” I grabbed her wrist.

She ripped her pudgy arm away and waddled back. Her eyes narrowed as she threw the bug onto the floor. She stomped. The backswimmer was now a picture on the stone floor under her wet feet. The image of its crushed shell and unjust death made my stomach churn.

"I told you to stop!" I reached for her arms.

“You’re with them?” She continued to hurl the other aliens at me with an apoplectic force.

She shrieked as I ran. Following closely behind, my sister was an incandescent rogue captain who had abandoned all hope of diplomacy. She armed himself with a hose. With her thumb over the hole she was able to improve the accuracy and increase the intensity of the water. Freezing needles stabbed my arms. I continued to run, dodging the water as I reached for another hose at the opposite end of the yard. I turned it on. We stood at either end of the pool. Our weapons gushed water from side to side, forming snakes ready to strike.

“Surrender!” I fired a line behind her as a warning.

“Never!” She shot into my face. In a flash, my eyes were pelted with droplets. I clutched them in my palms as I blindly ran around the pool.

Then I fell. I plunged through the surface and into the atmosphere of alien territory. The salty water filled my mouth. A bit disoriented, I began to swim upwards as I heard a muffled splash. My wrist was ripped out from under the water. Bean-like fingers clutched the side of the pool. She was trembling.

“Are you okay?” I turned her to face me.

Expecting to see a red, sobbing face I was stunned by her nervous grin.

“Hayoon okay” She bobbed her head underwater and swam to the stairs, not letting go of my hand.

Water gushed from her pockets as she climbed up. Our hands were sticky and slimy with algae. With my hose still running on the ground, I sprayed the green residue off of her soaked overalls. Then she did the same for me. The cool water was refreshing in the summer heat.

She looked at the research bucket of aliens one last time, watching the backswimmers disperse from her shadow. They had nothing to be scared of. She tipped them back into the pool. They were a welcome organism in her world for creatures who were not so small or unseen anymore.

Receive stories by Aibee in your feed
Aibee
Read next: The End of the Road