Give In To Me Returns 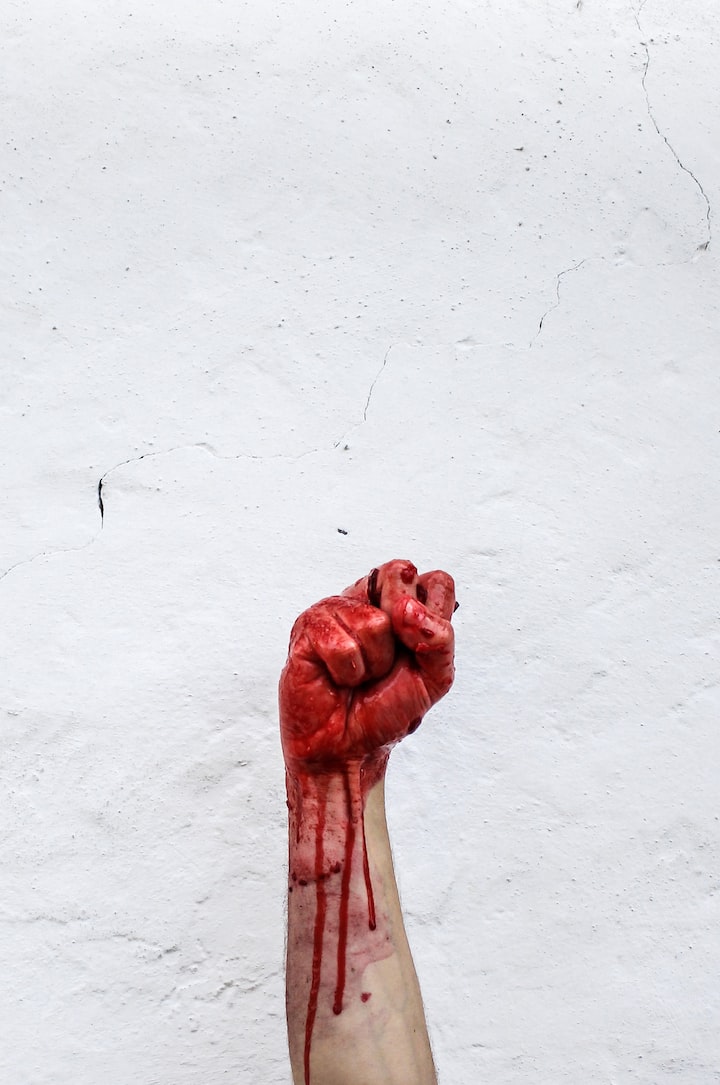 As nightfall arrived, darkness filled the entire household. Everything was in place, the plan almost completely in action. All that remained was breaking the salt line, which ultimately would allow Amaryllis to enter. Riley and Selena knew she was outside, waiting in the shadows. The Omega stood near the dining table, a Devil’s Trap drawn above. Glancing towards it, she sighed; she still wasn’t certain if the plan would work. She proceeded to head into the connected living room; she walked by the couch, another trap above. A final Devil’s Trap was in the middle of the small foyer; there were other traps throughout the household but those specific three were the only ones that Amaryllis could possibly get caught in during the impending confrontation.

Pausing her walking when she was in front of the door, Selena glanced towards the general direction of Brian’s bedroom, spotting Riley poking her head out from her hiding place. Noticing that she was being watched, Riley gave her a quick thumbs up. Possibly for the first time in her existence, Selena rolled her eyes and shook her head as she faced the door. She glimpsed downward, eyeing the salt line before running her shoe through it, breaking the seal of protection. Not a second later, she was sent flying backwards a foot or two as the door flew off its hinges. Landing roughly on her back, she groaned in pain before sitting up. Her eyes widened in surprise when Amaryllis entered the household, using Emily Swan as her vessel again; she was attired in a short rosy dress, coated in the dry-and-fresh blood of her victims.

“Did you miss me, little ray of sunshine?” Mara cooed, smirking at Selena. "Because I certainly missed you.” Her eyes glanced around the foyer in search of Riley. "Now, where is my former lover? Did she slip away somehow?” She looked back towards Selena, tilting her head creepily. "No, that’s not it. She’s still here. She’s just hiding. You’ve switched places. Last time, she was standing before me. You’re trying to trap me again, aren’t you? Too bad it isn’t gonna happen.” She lifted her arm, raising it over her head with her palm pointing towards the ceiling. Suddenly, the wood split, rendering the Devil’s Trap useless. Lowering her arm, she stepped towards Selena. “I won’t fall for that old trick again. As you can see, I’ve learned a few tricks of my own.”

When she reached Selena, she proceeded to attempt lifting the young woman from the ground but was stopped when holy water splashed into her face. Hissing in pain, she reflexively waved her arm and sent Selena flying through the wall of the hallway; the female landed roughly onto the dining table and rolled onto the floor. Blood was trailing down the sides of her face. "Riley…" she whimpered. She started crawling towards the open doorway in an attempt to reach the couch, having no strength to stand yet; the second throw knocked the wind outta her.

“No crawling allowed,” Mara commented, appearing behind Selena. Picking her up by the back of her shirt, the demoness threw her forward and sent her flying across the room; she flew over the couch and landed at the window, further injury being brought to her. Mara began laughing, pleased with herself. "Looks like sister dearest doesn’t want to come out and play. That’s fine. More fun for me, I suppose.” Like a hunter stalking its prey, the demoness slowly approached Selena. She paused, however, as she hissed in pain, additionally growling in anger as a white fireball connected with her arm, leaving a nasty burn; standing where Mara had previously been, Riley was glaring at her with another flaming ball in hand. The demoness smirked. "Well, well, well. You came to play after all. I was looking forward to it, darling. I missed you so much.”

“We're sending you back to Hell where you fucking belong,” Riley stated with venom. Raising her arm, she was ready to toss another fireball but hesitated when she finally realized who Amaryllis was possessing. Her glare intensified as she came to the quick conclusion that the demoness chose Emily as a vessel again just to spite her.

Mara scoffed. "Good luck, darling." She glanced at the fireball. "Keep 'em coming, honey muffin. They won't kill me, but they certainly will kill the true owner of this meat suit. You don't want that, do you?” She released another maniacal laugh, but stopped short when a fireball hit her directly in the face. As she stood there screaming, the flames scorched up the skin of her vessel and when the fire died, melted flesh fell to the floor. The demoness glared. “That wasn't very nice.” She held her palm out towards Riley and motioned towards herself, causing the human to fly at her. Gripping tightly onto her neck, Mara tossed her against what remained of the wall and pinned her there with her new telekinetic power, releasing her physical hold on the woman. "You're gonna stay there and watch as I kill your sister. Then, you're coming with me, just like you were always meant to. You are my pet and no one else is allowed to keep you." She got close to Riley’s face. "You are my bitch and you always will be. I've claimed you."

Somewhere behind Mara, Selena was slowly removing herself from the floor. She was lucky to be able to move at all; most likely, she had a concussion, probably would have bruises on her body later on, and her right wrist was most certainly broken. Holding in her grunts as she stood, her eyes locked onto Amaryllis and Riley. She glared at the demoness before making her move while the bitch was distracted; she mimicked Amaryllis by raising her uninjured arm and without hesitation, she waved it towards the direction of a functioning Devil’s Trap, the nearest being above the couch. Instantly, the demoness went flying through the air and once she entered the trap, she hit an invisible wall that prevented her from leaving the pentagram. As Amaryllis screamed while trying to break free, Riley was released from her telekinetic hold. Together, the siblings approached the demoness, Selena doing so with a limp.

"No! No, no, no!" Mara yelled. She nearly completed her revenge! She was gonna kill Selena! She was gonna torture Riley in Hell for years, shape her into the perfect slave! How could she have failed her mission so easily?!

Selena shrugged. "You shouldn’t have wasted time with your monologuing.” She reached into her back pocket and pulled out a paper, glancing towards Riley. “Would you like to be the one to send her back this time?" She held it towards her.

"Absolutely.” Riley took the sheet from Selena and unfolded it. Looking down, she started chanting in Latin. Amaryllis growled and screamed as she jerked around. Halfway through the incantation, she did something they should've expected; she impaled herself with her own hand multiple times, ripping out a few intestines. Amaryllis smiled evilly at them, but Riley continued reading aloud, knowing there was nothing they could do to save Emily. As she finished the final verse, the demoness snapped her own neck, ultimately ending Emily's life and laughed again before she was finally forced out of the body, sent back into Hell again. Emily dropped onto the floor, completely lifeless and bloodied.

Selena frowned as she looked at Emily's corpse. Tears formed in her eyes but none spilled. “I wish we could have saved her again. I wish we could have saved everyone.” She glanced towards Riley and whimpered. When Riley stared at her with great concern, she half-smiled. “I will be fine. I have minor injuries that will heal in time. Do not blame yourself for being unable to help me sooner.”

"I shouldn't have hesitated,” Riley stated. "Exactly how minor are your injuries? Is anything broken? Sprained? Unfixable? What?" She was suddenly extremely worried about Selena, especially since she nearly got her killed.

Selena answered carefully. "I may have a concussion, I will have many bruises by sunrise, and I definitely believe that my wrist, the right one to be more specific, is either broken or sprained because it hurts a lot and I cannot move it much.” She looked back towards Emily's corpse. "Amaryllis might return once more," she remarked with a frown. "Possibly sooner than this time or maybe further into the distant future. Regardless, we need to be prepared for that."

Riley shrugged. “We'll just keep sending her back to Hell until she finally gives up or something.”

Selena gazed back towards Riley, her frown remaining. “Demons are usually restless and they tend to never stop once they have started. We may have to exorcise her for the rest of our lives if we cannot find a more permanent solution. We will have to be on guard endlessly if that is so.”

"You're probably right. As usual.” Riley sighed. “Come on. Let's get you to a hospital before I go insane with guilt and worry.” Selena nodded and both started heading out of the house. As Selena limped out, Riley paused. She glanced around the household with a sad smile. Gripping onto the necklace that still hung from her neck, she squeezed it tightly. "I'll always love you, Brian, and I'll always miss you," she whispered. Releasing her grip, she walked out of the house with the knowledge of having to return to hide the evidence of battle and death...

I exist. I write. I use profanity. I love. I hate.