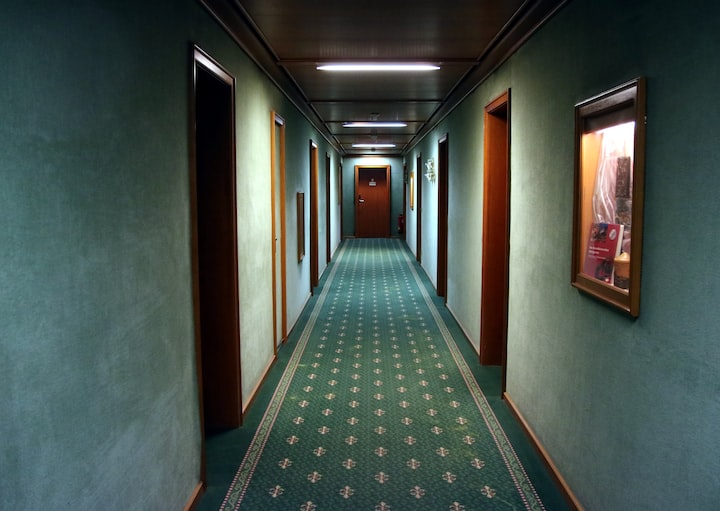 Photo by Frank Eiffert on Unsplash

When it first started he thought it might be Alzheimer’s, or the signs of the onset of Alzheimer’s.

It was this uncertainty which led him to wonder about the Alzheimer’s in the first place - a lack of confidence in what he was saying, an absence of trust in the very words he used. Did these words mean exactly what he thought they did?

He worked in marketing, and was used to expressing himself fluidly and well. Now he stumbled over words in meetings, stammering as he tried to expand his point. Where he used to be succinct and glib he was now long-winded and uninspiring.

Was he just getting old?

He travelled often for work. His company was a major producer of food flavouring chemicals, with branches in every continent except South America. The big topic in flavourings these days was artificial meat and meat-like products: it was shaping up to be a sea change in the way people ate food, and kept him moving from one region to the next to ensure that all elements of the corporation were pushing in the same direction, except when the particular demands and customer demographics of that region meant they must push in a different direction, or push softer in one aspect, or harder in another, or both.

“We have a strong, historical tradition in soy,” said his counterpart in the Japanese office. “Consumers do not need to be persuaded to accept it here, as in other markets.”

“Yes, I know,” he replied, blushing furiously, “that’s what I’m here for. Why I’m here. To ask you about - about the acceptance of soy. How to replicate it in other markets. Replicate its… acceptance.” He had told them that at the start of the meeting. In his introduction. Hadn’t he? They were already forty minutes into the meeting. What had they thought he was talking about?

The meeting seemed a disaster, and he the cause of the disaster, but the follow-up email chain from the Japanese marketing department expressed gratitude and enthusiasm. Or at least, he thought it did.

He wasn’t sure what emails meant anymore. He read and re-read the text of emails from his manager and colleagues, trying to glean points of hard information, but the more closely he read the emails the less sense they made to him. Each word was one he knew, or thought he knew, but when assembled into the specific context of their origin sentence their meaning became shaky, like a wall of ill-fitting bricks. He felt that if he could just find one sentence that gave absolute, concrete information then it would provide context for the sentences immediately around it, which would then pass on their context outwards in a ripple effect and the wall of ill-fitting bricks would shift, all falling into place, having only needed a tiny nudge. He combed through the emails, out of frustration looking up each word in the email in turn, but they refused to solidify into anything objective. It was like navigating in heavy fog.

He was terrified of his confusion being discovered. Terrified. At any point, he felt, someone would rise up in a meeting in Singapore, in Frankfurt, in San Diego, and say: “You don’t know what you’re talking about.” Someone in an email chain with the C-suite CC’d would ask a question point-blank to which he had no answer; or worse, one where he could not even parse the meaning of the question. He would be fired, he was sure of it. He would have to confess to his slipping grasp on speech, and would be forced to the doctor, where he would be diagnosed with Alzheimer’s, or a brain tumour, or dementia.

Unable to ask for clarification directly (and anyway unsure of being able to word such a request correctly), he instead sent vague reports of success and yet-vaguer requests for feedback and clarification. He combed through previous emails that he had sent, emails to previous colleagues in previous projects, copy-pasting fragments into something he hoped resembled sense.

The replies were blandly encouraging, and devoid of meaning.

Life followed a pattern, which pulled him along without his permission or input. An itinerary would be sent to his company email account with a flight number and the name of a hotel. He would take a taxi to the airport at the given time and board the plane. On the plane he would sleep and eat unmoored from normal timekeeping. Breakfast as the sun burned hotly through the porthole window. Lunch while looking out at the twinkling lights of a nameless city at night far below. He ate and slept, slept and ate, and woke without knowing how much time had passed while he was asleep, or how much was left until arrival. Did it matter?

Arrival in the destination airport was a coin-toss. Customs and immigration (sometimes there was immigration, sometimes not; he was never sure which it would be until he arrived) would often just require him to hand over his little sheaf of travel documents and stand there quietly. But occasionally they would ask him questions.

“Business trip,” he would say lamely, gesturing at his documents spread out on the counter in front of him. Their words slid around him like a shoal of quicksilver fish around a diver. He examined their faces: bored and annoyed, mostly. If more bored he would get his passport and itinerary pushed back into his hands with a roll of eyes; if more angry, then he would be forced to explain himself and his purpose more.

“Business trip, a meeting,” he said, close to tears. He tapped on the itinerary where it lay in front of the immigration officer, “my hotel.”

From the airport, a taxi to the hotel. He stumbled when speaking to taxi drivers. He had entered a taxi a few weeks ago (or was it a few months ago?) and had gotten stuck trying to tell the driver the destination hotel. He tried his smattering of Spanish, of French. The driver jabbered at him in return, until - giving up on niceties - he had thrust the print-out at the driver, pointing to the name of the hotel. The taxi driver nodded brusquely, muttering under his breath. As they drove he recognised the buildings. He was in London, and the driver had been speaking English.

Since then he stopped talking to the taxi drivers altogether. The night before departing his hotel he prepared six copies of his itinerary in six transparent plastic loose-leaf folders. One for each taxi between hotel and airport, one for checking in to his flight, one each for customs and possible immigration in the arrival airport, and one for the front desk clerk when he checked in to the next hotel. He found that if you walked up to the person with confident body-language but an apologetic face and handed them the folder, then they would ask few to no questions and simply go about the task of helping him move from one stage of his journey to the next. He was surprised at how grateful he felt to be spared this minimal amount of human interaction. He slid through the world with increasingly less friction.

He tried bringing the same strategy to his work. He started meetings by writing vague platitudes on the whiteboard and then gesturing for discussion. Demographic Limitation he wrote in one meeting, Externalize / Glean in another. He slashed the board into quadrants and then let the meeting run its course. If he was asked a question he would stare out of the window, a pantomime of pensiveness and deep thought. Usually the room could only hold this silence for a few seconds before someone else would suggest an answer on his behalf, to which he would nod sagely, and the meeting would continue. He felt that he was getting strange looks. He felt that there were awkward pauses.

But he could no longer tell for sure.

It was after one such meeting in Cape Town, or Vancouver, or Hong Kong, and he was in his hotel room. The television was on. Blobs of colour moved about on the screen, there was music or maybe laughing. He was sitting on the bed with his laptop on his knees, scouring his email inbox for sentences to copy-paste into a report for his manager when the phone rang. He froze. People didn’t call him in hotel rooms, ever. They sent emails.

Perhaps it was a mistake. He waited, barely breathing, until it stopped ringing. Then he took the receiver off the cradle.

After an indeterminate time there was a knock at the door. He held very still, and wished that the television was off. If the television were off then he could pretend not to be here. The knock came again, with a voice attached to it. Was it saying his name?

He opened the door to find a person in hotel uniform. It was a man, he thought. Words tumbled from the uniformed figure, too fast to parse. He thought his name was among them.

“No thank you,” he said to the hotel uniform. He made what he hoped was an apologetic face. “No, thank you.” He made to close the door, but the uniform rested a hand flat on its surface - the door’s - to prevent him from doing so. More words. He thought among them was check out.

He was sweating now, clammy moisture sticking his shirt to his back. He had not received his itinerary yet. Or had he? Was he supposed to leave? He longed for a print-out of his itinerary to press into the man’s hands, or perhaps it was a woman. They were standing in the doorway looking at him. Their expression was impossible to read. They spoke again, softer now. It felt like it was a question.

If he could check his laptop then maybe there was a new itinerary there. He could make print-outs of it and this problem would be fixed, or at least this interaction would be over. But he didn’t think there was an itinerary, or he would have seen it. Or maybe he no longer recognised them, the itineraries, when they arrived in his inbox.

The person in the door spoke again; more questions perhaps. They could be asking for his name, or his itinerary, or where he was going next but it did not matter for the man was not sure that he knew.

More stories from Madoka Mori and writers in Fiction and other communities.