Lucy Johnson has spent a lifetime disappointed in herself. No matter how hard she tries, she will never be as good as her sister... 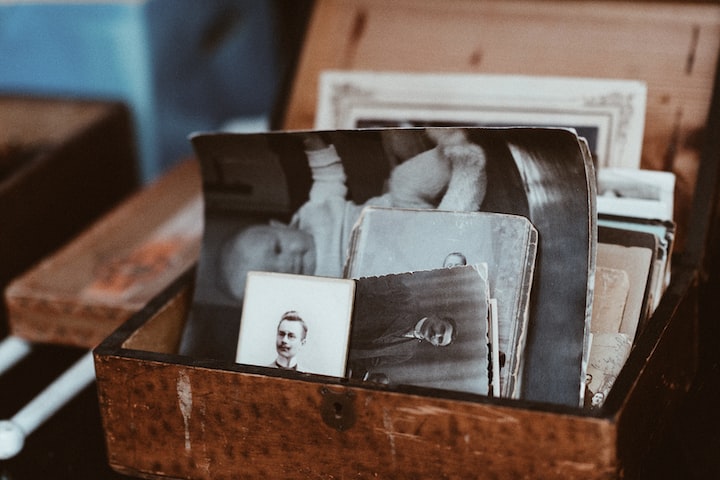 There it is, the old shoe box, exactly where her mum stores it, in the under-stairs cupboard, on the shelf behind the toolbox. The lid falls as Lucy reaches over, so she extracts the black-and-white picture that smiles up at her. She peers closely, needing a double-take to clarify the occupants. Regular comments about her being the spitting image of her mum always interspersed conversations as she grew up, and here she is with the proof. There is the same straight, boring, brown shoulder length hair (although now streaks of grey are filtering through hers) thin lips, pale complexion and a small nose. Her only inherited feature from dad is the crooked index fingers that become noticeable when she spreads her hands.

Me and Bob, Southend Pier July 1962, the caption on the back states. That must have been their honeymoon. The dust tickles her throat as she edges backwards with her prize in hand. She must clear these belongings, but the thought fills her with dread. She isn’t ready to pack that area of her life away. Although the rooms are unused and gathering cobwebs, they are catalogue pages of her childhood she can’t pop into the recycle bin, not yet anyway.

With memories oozing from every room, the idea of papering over them scared her mum, so she refused Lucy permission to call in the decorator. Of course, that didn’t matter now, not since she’d moved her into the Sunny Days Nursing Home.

A lump gathers, and her eyes glisten as she tries to remove her dad’s words from her head.

“I promise,” she replied.

And a good job she has done by packing her off as soon as it becomes too much. Such an amazing daughter! Her dad would be proud. The disgust that sits deep in the pit of her stomach as she comes to terms with letting him down never eases, regardless of the fact that it is the only decision she could make, considering the circumstances.

Tea, everything’s better with a cup of tea.

Mug in hand, she unlocks the back door and peeks out. Nettles and thorns invade the once manicured lawns and neatly pruned bushes and she spies the pear tree, now growing out of control, with its pile of rotted fruit congregating at the base. Throw an old refrigerator into the mix and the vision will be perfect. She retreats to the front room to prevent the view of the garden from overpowering the happy childhood memories. The hours they spent weeding, pruning, mowing and perfecting. And now she can’t step foot out there. Another fail.

She turns her attention back to the shoe box. How young and full of life they seemed before the harsh realities ground them down. If they’d have known what lay in store, would they have married?

She scours the contents and retrieves the wedding photograph. Her mum is forever asking for Bob to visit and regardless of how many times they tell her, she never remembers that he’s died. Fifty years and her memories are just snapshots. Lucy closes her eyes and exhales deeply. What must that be like?

Wow, her mum’s dress was fantastic, an A-line silhouette with an empire waist and look at their beaming faces. They were certainly in love. If she’d loved either of her husbands in that way, they wouldn’t be her exes. The first divorce disappointed her dad, but when it happened again, well…. If Lorna was here, she would have found the love of her life straight away. The perfect daughter.

It was pot luck, that she survived and Lorna didn’t. Her placenta was the stronger one, simple as that. Neither of her parents got over it. That was obvious. Oh, they adored her, spoiled her, smothered, but what turmoil to endure; their dead daughter staring at them every day. Did they wonder if Lorna would have been the better choice? Always.

They never tried again, and she never asked why.

At school, her friends assumed she was an only child. It was easier not to correct them.

Her mum never worked. Well, that wasn’t the done thing back then. Homemaker and mother, how dull! She spent any free time baking or drinking tea with ‘Aunt’ Sally from next door. Quality time between them was non-existent. Lucy had thought hard about that one.

“Think of an occasion from when you were a youngster,” the doctor advised after her mum’s condition worsened.

Empty, her mind was empty of outings with mum. Every bike ride, trip to the park or cinema visit was with her dad. It had never occurred to her before that her mum kept her distance probably because Lorna was absent. Yes, there should have been two and I’m sorry for your loss, mum, but it’s not my fault.

And now, the opportunity to confront her about it has passed.

It was at her dad’s funeral when she realised something wasn’t right.

The old shoe box perched on the sideboard. They found images of dad for the booklet and forgot to return it. Aunt Sally moved it to the table. The Southend picture was the first out, and her mum’s vacant expression as she tried to recall events puzzled Lucy. After fifty years of marriage, you gain a lot of memories and, understandably, you forget some, but your own honeymoon… no, that’s priceless.

She glances over at dad’s chair. There he is, reclined, watching the match.

“Wendy, any chance of another beer, love.”

“You couldn’t fetch it yourself, we are making biscuits,” (oh, yes, they sometimes baked together, if dad was busy). Mum placed the glass in his hand, kissed his head, and left.

She is still undecided about the chair. Threadbare, it belongs on a skip. But it’s dad’s….

She will sift through the belongings, she owes it to them, as their daughter. The six-week school holidays are looming; the ideal opportunity to begin, taking a room at a time, and a professional gardener to sort the tip. This empty shell deserves another family to make memories in it.

She never married again. In fact, she hasn’t had a proper relationship in the last ten years with all her focus being on her teaching job and parents. She couldn’t have children. After the third miscarriage, enough was enough. Yet another disappointment for dad to add to the list. At least she was consistent. Lorna would have had twins, triplets and quads.

The mantle clock chimes its non-melodious noise whilst her mobile beeps. 4pm. She doesn’t need to be reminded, she knows visiting is looming. Every week on the same days at the same time for the last six weeks. Twenty minutes each visit, no more. Routine is beneficial to mum’s emotional wellbeing, according to the doctors. Lucy is dubious, but she will continue. She promised and you should never break a promise. But what if she rang in sick, just once....No, Lorna wouldn't.

Maybe the shoe box should accompany her. Will the images spark any recognition? Probably not. Any sort of acknowledgement from her mum would be nice, though. A ‘Hello, Lucy’ would be agreeable, but she’s gone, with the chance of being hauled back at zero.

Imagine living like that. Permanently bumping into familiar faces and then racking your brain to remember where you know them from, but it just won't come to you. It would be enough to drive you crazy, and that’s her mum existence, and she’s powerless to help.

She pops the photographs away and replaces the lid. With a quick glance at the clock, she nods her head. Yes, that would go with her today. Perhaps the noise will evoke something. As she picks it up, a small polaroid image falls away. A little newborn baby name band is stuck to it. Baby Johnson 1.

Lucy doesn’t know the full details of what happened as no one's been allowed to speak about it. Too fragile a topic. She knows her mum gave birth naturally and Lorna appeared first. Dead. Then she needed to repeat the process to produce Lucy. It was the sixties. No dads allowed. So her mum coped alone. No wonder, she relied on the little blue pills. A prescribed drug addict that’s what she called herself when Lucy felt brave and asked why she took them.

“Good afternoon, how are you?” says Gloria, the overly cheerful nursing assistant. Lucy is sure she is helping herself to the pills. No one is that happy, not without help.

“Wendy keeps asking when Lorna is going to visit and when I asked her who she was,” Gloria pauses, scanning for any reaction, “she said she was her daughter.”

“Okay, thanks.” Lucy discloses nothing, because it was none of the nosy Parker's business. “All right if I go in?”

Lucy sucks in a breath.

Lucy places the box and clock onto the coffee table before sitting down opposite.

Writing is my therapy. Extracting thoughts makes a contented mind. I am a writer, and blogger and have been scribing away for three years now. If you like my stories then please like or leave a tip. Join me on twitter @AuthorJAThorley.

More stories from Janet Thorley and writers in Fiction and other communities.