by Samantha Hardin 28 days ago in Fantasy
Report Story 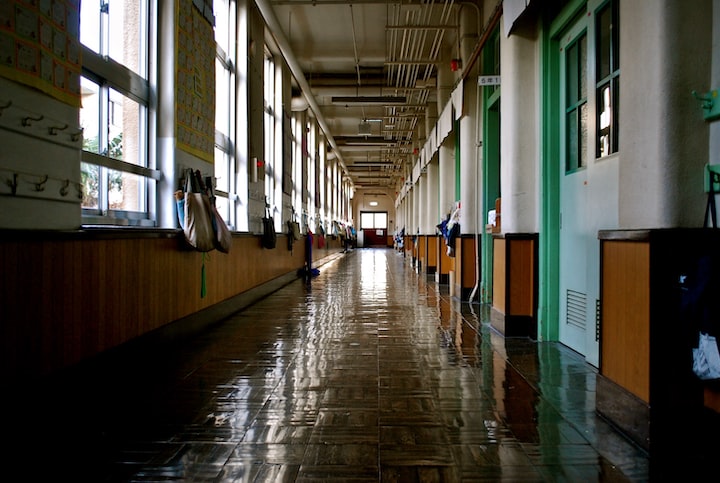 Photo by kyo azuma on Unsplash

There weren't always dragons in the Valley. Warner Valley High School, otherwise known as the Valley, was your typical American high school. No one could have anticipated the disruption that beset the school one Monday morning.

Kylian Wilson, the janitor for the Valley, unlocked the front door bright and early to make sure everything in the school was ready to go. It was a frosty winter morning, and it was his job to make sure the furnace was firing and properly heating the school. At first, it seemed like everything was normal, but then he noticed the building felt a little warmer than usual. Maybe the furnace is acting up again. Then, he noticed scorch marks on several walls. What on earth? What could have caused that?

His attention was torn from the scorch marks by a low growling sound coming from the gymnasium. “I swear, whatever kid did this is going to be in so much trouble.” He knew the kids liked to play pranks sometimes, but destroying school property took it a bit too far.

He quickened his pace to get to the gym quickly. Kylian wanted to catch the kid in the act. Nothing could have prepared him for what he saw when he slammed the gym doors open. Sitting in the middle of the floor, staring straight at him, were three small dragons. While each dragon had a different colored head, red, orange, and green, respectively, their bodies were all the same deep blue. Sharp claws dug into the gym floor, making Kylian nervous, but none of the dragons made any move toward him.

Suddenly, Kylian heard a quiet voice in his mind. I am Reja, and these are my brothers, Kepi and Deku.

Kylian shook his head, sure that he was imagining things. He looked at the dragon in the middle, who steadily met his gaze. “Reja,” he breathed out slowly. The orange-headed dragon’s head perked up as he heard his name mentioned.

Good, you can hear me.

Kylian stared wide-eyed at the creature in front of him. Had he eaten some bad pork last night? He couldn’t actually be seeing dragons, let alone telepathically communicating with one. Maybe he was still dreaming. A million possible explanations raced through his head.

His thoughts were interrupted by something brushing against his leg. He looked down to find that Reja was standing next to him. Kylian looked back towards the middle of the gym and found that Kepi and Deku were still there. However, they were now lying on the floor as if they no longer considered him a threat.

Reja brushed his tiny wing against Kylian’s pant leg again. He looked down at the small creature and felt a connection with him. Deep in his heart, he knew that this was really happening.

Reja shook his head as if he didn’t know the answer. I didn’t choose you. The Elder Dragons did. I am just a Youngling. I do as I am told.

I can just sense it. You should be able to feel it too. A pulling between us. Like a string tying us together.

“What about your brothers? I don’t feel connected to them.”

They are not bonded to you. They are just here to support me.

A thought suddenly occurred to Kylian. “Why are you here?”

Because this is where I knew you would be.

“I mean, what are you doing on this planet? Dragons haven’t existed here in hundreds of years.”

I am familiar with the Great Dragon Exodus of the 1400s. I was taught of it before coming here.

When Reja didn’t offer further explanation, Kylian prodded him again. “So, then, why did you return?”

Our elders sent us back through time to this planet so that we could find our DragonBorn and prevent the Great Human Dragon War that is coming.

Kylian sucked in a breath. He definitely wasn’t making enough money for this.

I am a twenty-something Mom to a rambunctious toddler boy and two mischievous cats. I enjoy reading, writing, playing video games, and watching television.

More stories from Samantha Hardin and writers in Fiction and other communities.