by Lizzy Gabrick 7 months ago in Short Story
Report Story

Remembering what hurt you in the past is sometimes unbearable. Thinking of what you missed out on is worse. 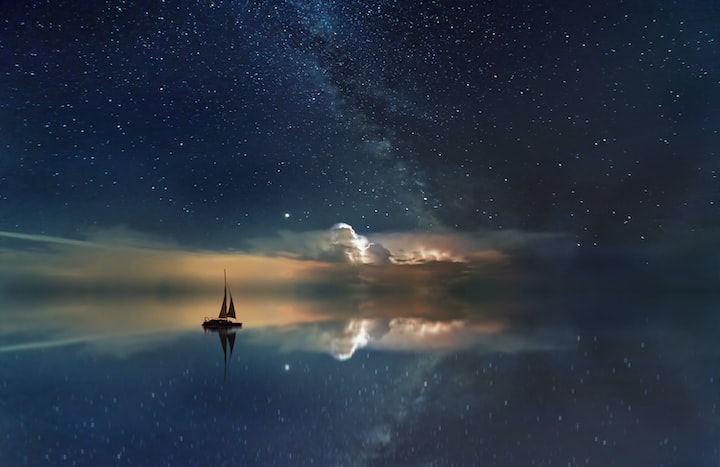 I peered into the small train compartment that lay on my right. It was dimly lit, cold, and deserted. Perfect. I pulled back the door that led inside, and threw myself down onto the soft leather cushion of one of the two seats. I finally let the tears leave my chocolate brown eyes. After everything that we had gone through, after everything that we shared; it was gone. Forever gone, never to come back into my outstretched and hopeful arms.

It had been two weeks of crying and two weeks of avoiding everyone who I had known for so long. That included, of course, all of my friends. My friends were there for me, they realized that I was in need of something. They tried to help, but naturally, they couldn't. Nobody could help me in this disastrous moment of my seventeen year old life. Well, nobody but him.

But he was gone, if you could call it that. Off somewhere avoiding me entirely, but I knew that it would be different if he had his choice. If he had his choice, he would be right here beside me, comforting my spinning mind, and telling me words of true wisdom. But then again, not everyone has their choice in the way that things should happen. Sometimes everything turns the other way around.

My brown hair covered my face as I tilted my head toward the musty, carpeted ground in an attempt to erase all of the devastating thoughts that were running through my mind.

My warm tears streamed down my already red, blotchy face. It didn't make any sense. Why did this have to happen to us? We had only just begun our relationship! My world seemed to be crumbling down ever since that day, and I knew that if my mind kept up this way, it would only get worse. I suddenly remembered eleven of the many words that he had at one point spoken to me. These words stuck in my mind as I remembered the day that they were first spoken.

I was sixteen at that time. Happy, giggly, carefree, and never having even the slightest idea that within the next year, my whole life would take a drastic spin for the worst.

The two of us, he and I, were sitting under 'our tree' talking and laughing so much that our guts hurt from the constant movement. We were having a thumb war.

"One, two, three, four, I declare a thumb war," we both chanted together, half laughing, half singing. "Five, six, seven, eight, try and keep your thumb straight."

And so, the war started. Our hands were linked together, the act being so incredibly gentle that no amount of money could outnumber the smiles that were swarming inside of us. Our thumbs moved quickly around the base that our hands provided, as if they were trying to catch a prey. We were each other's prey and predators in this innocent little game. It was an innocent little game that caused us too much joy, that, in a way, it was strange. But after only just a few moments, his soft and gentle thumb clasped over my own.

"One," he said teasingly. "Two. Three!" He shouted the last word as he reached for my other hand and pulled me up into circles. The two of us spun around and around, smiling and giggling as we tripped over the uneven patches of the holey ground that lay beneath our spaced feet. We only stopped when all that we could see were blurs. It seemed like only us and our friendship existed.

We settled ourselves back into our usual places against the maple tree's hard, rough bark. His warm hands continued to clutch mine.

"I can tell that you are no longer having disconnected dreams," he commented. "I am glad. They were really tearing you apart."

"Me too. It really means a lot to me, you know, the advice that you gave me. It really does work," I answered, smiling happily as the look on his flawless face mirrored my own.

"It was my pleasure. I can't stand to see you unhappy. It just rips me apart. You said that you would lay awake at night, thinking about the bad things that you were witnessing. I can't even begin to imagine the pain it must have put you through." I giggled as he lifted our hands and gave them each a gentle squeeze of gratefulness. He was happy and relieved that my nights of lying awake with no way to take my mind off of the things that I couldn't control, didn't suck me into their depths of misery. As was I.

"It was painful, but you helped me through it. I will never be able to thank you enough for all that you have done for me!" I replied truthfully as I looked him directly into his deep, glistening eyes. And for one very brief moment, I swore that I saw the color in his crystal blue eyes darken. Darken almost to the shade of my dark blue jeans.

I guess that I have never really given those words that much thought. At the current moment, they seemed to have so many meanings. Some meanings that not even I could comprehend entirely.

I suddenly realized that the abnormal advice that he gave me that day is what I live on. I live on the advantage of dreaming; the chance for you to travel to your wildest fantasies. Without dreaming, anyone would feel some sort of emptiness inside of them that couldn't be filled. They would be stuck in reality, having no way of escaping what pain it was possibly causing.

But I had faced my reality. I had faced it for over a year before he showed me the answers that lay beyond the abilities of an average person's thinking. He helped me to believe that I didn't have to do everything on my own. We blossomed a new and greater friendship than any previously blossomed before us. It would remain for years to come.

He told me that he would always be there for me. But where was he now? I knew that answer to that question, but accepting the answer is a long process. Of course he was right beside me at the current moment! He was zoning in on my many thoughts and feelings. He would never leave my side.

Those eleven words, a person with disconnected dreams have no way out of reality, will always be my most cherished possession. That, and the many memories that still thrive inside of me. I will never forget that innocent connection that the two of us shared.

But that day, that horrifying day, will always be my least cherished possession. I can still remember the look on his unblemished face before that drunk driver slammed into the side of his car. The glass shattered all around us, and we didn't know that our single year of friendship would end that way. It all happened too soon.

And even though my life has changed for the worst within the last two weeks, I have learned something. Always live in the moment, for you never really know when everything can change. All it takes is one second, and that single second can haunt you for the rest of your life.

He didn't leave me until two days after the accident, but the moment that the doctors told me that he wouldn't live, my heart skipped a beat. I was in love with him, and now the invisible line that connected our minds was broken. We each were gifted with creativity and the knack for knowledge. It was a gift that we chose to share with each other, not realizing the actual importance that lay behind our words.

But even if he is gone, dead, he will forever remain a part of who I am today. And entirely because of him, I know that I will never again spend even one night with disconnected dreams.

I spent many years reading and writing in my adolescence but have found inspiration has lapsed since I have become more settled into my adult life--a career and marriage. I look forward to changing that and sharing my creations with you.

More stories from Lizzy Gabrick and writers in Fiction and other communities.