by Brianna St. Clair 6 months ago in Fantasy
Report Story 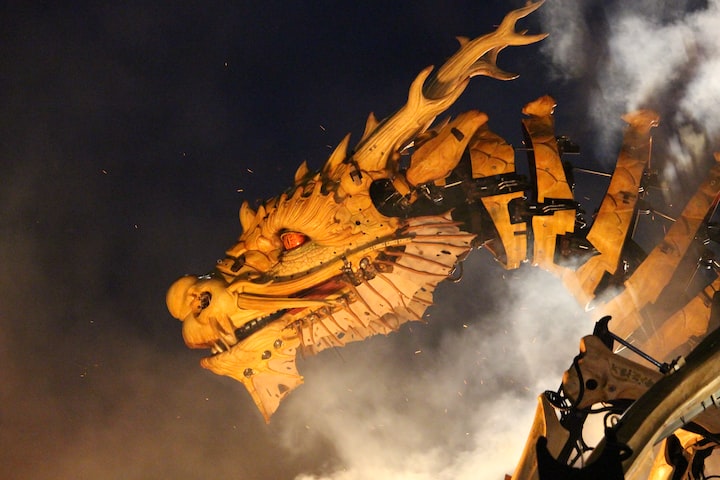 Photo by Laith Abushaar on Unsplash

There weren’t always dragons in the valley. I still think there is a dimension out there that does not have them, the one I grew up in. The fact of the matter is though me and my two best friends Tripp and Ria are no longer in that dimension. We are in the same town but all of the houses are empty, there are no people, no cars, no regular animals. We got thrown into this world 8 days ago but Ill tell you all of the details of how it happened and maybe going through it can help us figure out how we got into this mess in the first place.

It was June 1st the first week of Summer vacation, me and Ria promised each other to meet up everyday and practice soccer. We were about to be going into our Freshman year and wanted to make the Highschool soccer team. Tripp has been dating Ria since 2nd grade so he tagged along everyday to be our goalie. Ria lived next door to me so her and Tripp came over and knocked on the door and we walked the fifteen minutes to the field.

Ria always led our warm up jog. We were on our second and final lap before we started our drills and Ria started checking up on me, “Hey Jasper, I know your dads back in town. Are you doing okay?” I didn’t really want to talk about it, I hated when he came back. He would leave for 7-9 months at a time and come back and act like he never left with all of his dumb rules, “Im doing okay, honestly I just want to work hard to get a scholarship to a school out of state. I wish I wasn’t stuck in this hellhole for 4 more years. The first chance I get I’m gone.” You could see Ria’s energy shift as she took in my emotion, “Im always going to be here, wherever you go me and Tripp will go. Best friends for life?” I smiled and said, “Best friends for life.” And we continued running. As we were getting back to where Tripp was setting up cones for drills, the weather was changing and fast. It was clear one second and the next storm clouds were right above us. It started raining, we started packing our things up, "Damn, I really wanted to practice, where should we go?” I said frustrated. Tripp pitched in, "Lets go to the diner its right down the street, shakes one me!" I got all of my stuff together in my bag and we all started sprinting down the road. We got to the diner just before the lightning started.

When we walked in, nobody was in there. All of the lights were on but the booths were empty and nobody was behind the counter. Something felt off. I went behind the counter, "Hello? Is somebody here?" No one replied. Ria and Tripp followed me into the back room. It was empty. We looked to leave but the storm was getting dangerous to be outside. "Maybe we should just wait the storm out and then head home?" Ria and Tripp nodded in agreeance and went to the corner booth we usually sat at.

Ria got hungry and grabbed all of us some burgers, fries, and shakes that were already made. She turned to Tripp, "Wasn't it on you today?" He smiled and gave her a 20 to put on the counter. We started eating and the weirdest thing happened. Tripp yelled, "Guys look!" Me and Rias backs were turned away from the window, we both turned our heads and caught the slightest glance of a thing flying into the clouds. "What was that!" Me and Ria said at the same time. "I don't know it looked like some creature" Said Tripp. We were all weirded out but since none of us got a good look at it we brushed it off as a plane in the storm.

We sat there for another 30 minutes until the weather cleared up a little bit. Tripp pitched in, "I told my mom I would be home by Seven since we have family in town, can I walk you guys home? Yes I replied. We got up, threw our trash away and started the walk to my house. I figured he would drop me off first so he could kiss Ria at her doorstep. They were always so mindful of my feelings and never made me feel like a third wheel by kissing in front of me.

We got a couple minutes into our walk, I stopped and looked around. "Have you guys seen anyone?" Ria and Tripp both shook thier heads and said no. Tripp then pointed out, "Guys where are all of the cars?" It started sinking into all of us that something really weird was going on. As we looked around more the streets were empty. The only thing that was still here were the structures. We all got super freaked out and sprinted the rest of the way to my house.

We could not of got there fast enough. I pulled my house key out of my soccer bag as we were running up my porch steps, I opened the door really fast. Tripp and Ria followed me around my house as I was screaming for my parents, "Mom! Dad!" Neither one answered, the house was empty, I couldn't even find my dog Nala. "What is going on!" I was really freaked out at this point. Ria and Tripp were too. I was practically sprinting around the house frantic. Ria tried to calm me down a bit, "Lets just go to my house and wait for your parents there." We ran next door, Ria grabbed the key under the mat and unlocked the door. "Mom! Dad! Kinsley!" Her parents or sister were not there. She ran into her bedroom, everything was the exact same except her fish tank was not there. She has had that fish tank on her desk with a beta fish in it since I moved next door when I was three.

Thats when we were stopped in our tracks, out her bedroom window were thousands of eggs the size of a watermelon! They all were close together and looked like they had a soft netting over them. "What are those?" My jaw was open, I could not wrap my head around what I was seeing. I looked to my right. Ria was grasping Tripps hand so tight and both of their mouths were open. It was the first feeling of envy I have ever had towards them. I wish I had somebody to comfort me in that moment. I shook it off pretty fast because the fear overtook it. All three of us were just standing at the window, frozen, staring at the eggs. That's when the same creature we saw flying at the diner was swooping down from the clouds. Except this time it was ALOT closer. We ducked down so fast. "That cannot be what I think it is." Ria whispered. None of us could get our voices higher than a murmer. "I t-t-think it is." I stuttered out of fear. I was shaking.

Ria remembered the camera in the backyard, her parents set it up a couple years back after they had a break in. "I can watch the video feed from my Ipad. She crawled to her bed and reached underneath to grab it. First she checked for the messenging app. It was not there, same as our phones. Everything was the same except all apps we could access people in our world were just not there. She could barely pull up the feed her fingers were shaking too bad. We all huddled underneath the window gathered around the video feed. Another one flew in, it was bigger than the first one. The first one was white and a light grey, if you took the fact that she was 50x my size and could light me on fire it was actually a beautiful creature. She slowing bent her neck down and was sniffing the eggs. Tripp turned to us, "How many do you think there are?" "Too many." I commented while my brain was trying to wrap around what was happening to us not fully registering Tripp even said something. The bigger black dragon seemed to get up and move a distance away and laid in what seemed to be a nest bed that was made earlier. Maybe giving the Momma dragon some space.

We all eventually wore out and our backs went from against the wall to laying on the ground below the window. Ria fell asleep in Tripps arms pretty fast, I was glad she could feel somewhat safe in his arms and get some rest. My brain stayed up thinking, what was going on with my parents, were they looking for me yet? Was I ever going to see them again? My brain went back to my conversation I had with Ria recently, I wanted to take it back. I just wanted to be home. But in the meantime I had to try to be brave. There has to be a way back. I don't remember what time I went to bed but the last time the Ipad displayed was 5:26am.

We shot awake to the loudest cracking sound. Like a thick branch snapping in half. The noise kept repeating, at first it was spread out. But then it got louder and their were multiple cracks at a time. Tripp grabbed the Ipad and opened the feed to watch what was going on. What we saw was both breathtaking and enormously scary at the same time. Mom and dad had their backs against the house sniffing and licking the babies clean that made it out of the shell. It took 25 minutes for everyone to hatch and they were making little tiny squeals. They sounded hungry. All of a sudden mom let out a huge squak, she took a few steps and gracefully lifted off into the air and started flying. Dad followed. All of the babies were flapping their wings and trying hard to get into the air. A lot of them were running into eachother and taking crash landings. They weren't as graceful as their mom and dad but they eventually got into the air towards their parents and they were out of sight.

After a good amount of time of not seeing any of them Tripp mentioned we should go down there and check it out. Ria hesitated, although I was scared as hell I was so curious. We got to the back door and all froze. We just saw things we never thought were real, what else is out there? I eventually got the nerve to reach for the door and open it. I walked out, we formed a train with Ria in the middle and Tripp in the back.

It was a crazy sight, Ria's backyard was layered with broken eggs. They had this light green slime on them. It was everywhere. We looked around for a second, "What is going on, how did we get here?" Tripp went to answer but we got interupted by a chirp, we all looked to the left where it was coming from. An egg cracked and a baby dragon half the size of any of the other babies hopped out. It looks like they left the runt behind.

More stories from Brianna St. Clair and writers in Fiction and other communities.