by Emily Wilcox 3 months ago in Horror

A short story about cake. And death. 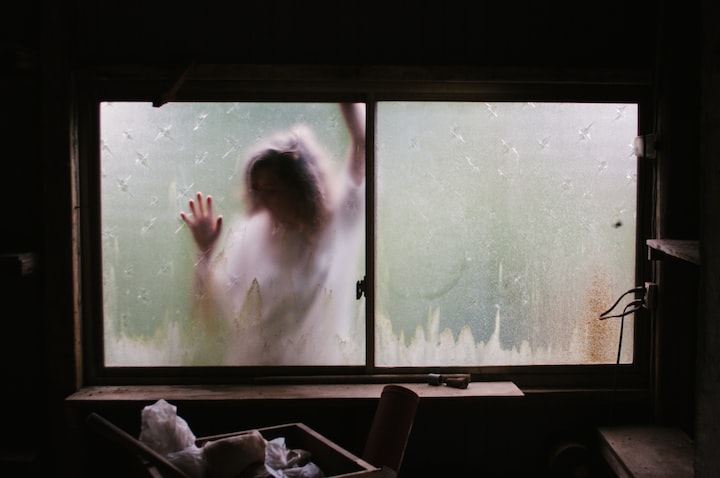 Two cups of granulated sugar? Why the hell are we still measuring with cups?

He pulls a dessert spoon out the drawer and scoops two heaps into the plastic bowl sat on the countertop.

He leans over to gaze at the recipe. Sunlight streaks through a gap in the blinds.

One and three-quarter cups of all-purpose flour.

What other purpose does flour have?

He flings open the cupboard with such force that it slams into the adjacent wall.

Oh, stop being such a fuckin’ wuss, would you?

With a concentrated look on his face, he shakes an arbitrary, unmeasured amount of flour into the bowl.

One tablespoon of salt, huh? No wonder my blood pressure is so high.

In the corner of the room, tied to a dining chair beside the oven, she whimpers.

He smirks to himself.

Probably not as high as yours.

Now, eggs. Eggs, eggs, eggs. Where are my eggs?

Slowly, slyly, he steps towards her, mischief glinting in his eyes.

She trembles where she’s sat.

He grazes his fingertips - the middle and the index, both coated in flour - across her abdomen.

….Perhaps I can borrow yours?

He chuckles again, then leans around her, grabbing a blue ceramic bowl holding a dozen large eggs.

He smashes one against her skull.

Yolk and egg whites ooze down her hair as she squeezes her eyes shut and cries around her mouth gag.

He walks back across the kitchen to the mixing bowl. Cracks two eggs into it. Mixes it together with his hands.

Listen, lady, I’m not religious. I don’t care how we do this. I really don’t. Scream all you like. Squirm. Sweat. Cry. Whipped cream and clotted cream is still cream at the end of the day, you know? I’m just saying. You’re only making this harder on yourself.

Her eyes are so glazed over he begins to wonder if he should have bought more icing.

So now I need baking powder, baking soda - what the fuck is the difference? - two bars of dark chocolate, and what? A cup of cocoa powder? Oh and a half teaspoon of vegetable oil and vanilla extract. Fuck me, do they want some helium from the core of the sun too?

He spends the next six, maybe seven minutes throwing all these ingredients into the bowl without even acknowledging her.

She sits silently, watching as he uses nothing but his hands to crush everything together. She just about manages to suppress her tears.

He whistles with pride.

Would you look at this masterpiece! And I haven’t even stuck it in the oven yet. Oh, that reminds me.

His fingers are a mess. So are his clothes. Dusted in remnant flour, egg shell, splashes of oil and vanilla. The sleeves of his shirt are crusted and damp.

Better heat the oven up first, he says, before opening the oven and prying out the trays already inside.

After he’s adjusted the dials accordingly, he glares directly at her.

She can’t hold back the tears any longer.

In a flash he’s standing over her, his looming frame all but swallowing her bound body whole. With the tray in hand, he extends it until he looks as though he’s serving a platter. With his free hand he grabs her neck, cranes it, slams her head down onto the cold metal surface. She's ready to be served.

Nope, no, too obvious. Not substantial enough.

He drops the tray, then her neck and smiles as her head slumps forward. Then he takes a butcher's knife to her ankle.

What the fuck are you screaming for? You know that whole ‘fear improves the taste’ is a myth, right?

He clutches her big toe in his cake covered hands. And licks it.

Hmm, I dunno. Too much bone, I reckon. Probably a little gristly. I want something softer, sweeter, so let’s see.

Her eyes are squeezed shut. She can hear a drawer slide open and then suddenly it’s silent, save for her erratic breathing.

And then a cool, sharp sensation touches her throat.

He considers dropping the pizza cutter and tearing out her esophagus with his fingers, but decides against it. Slowly, almost hesitantly, he wheels the cutter down her neck, right up to her collar bone. A trail of blood follows. She shrieks.

For fuck sake Jessica, nobody can hear you.

He chuckles to himself.

Or at least they won’t when I fry your vocal cords.

He drops the cutter to the ground, the clanging making them both flinch.

I know what this needs.

With a skip in his step, he strides over to the kettle and switches it on. Whilst he waits for it to boil he drops her toe into the cake batter, mixes it in and then grins at her massacred flesh.

Nobody ever said I wasn’t a messy baker.

The kettle clicks, steam curling into the air. But he doesn’t move, not at first. He just stands there, staring. Watching. Waiting to see if his cake will rise.

Jessica can barely raise her eyelids.

Let’s see if this won’t soften that flesh of yours a little.

He grabs the kettle, stalks over to her, crouches down and rests an elbow on her knee. Then he tilts the kettle forward and begins pouring until water is billowing down her chest.

Sweet fuckin’ satan, were you an opera singer in a past life or something?

Her wails echo around the kitchen.

His chuckles soon match their volume.

Together, they are a symphony of terror.

A timer rings out.

Oh man, time’s just slipping away from me. I better get a move on.

He rams his fingertips into her scalded flesh, right above her left breast, pushing deeper and deeper until layers of skin break away.

Your heart has got to be around here somewhere.

He cuts out a slice of chocolate cake and slides it onto a floral printed China plate. With a kind smile, he brushes away a stray crumb from his lilac silk tie and looks towards Jessica.

Then he asks, fancy a slice?

But corpses don’t respond now do they.

Receive stories by Emily Wilcox in your feed
Emily Wilcox
Read next: In the Swamp