Birds of a Feather and an Unlikely Friendship 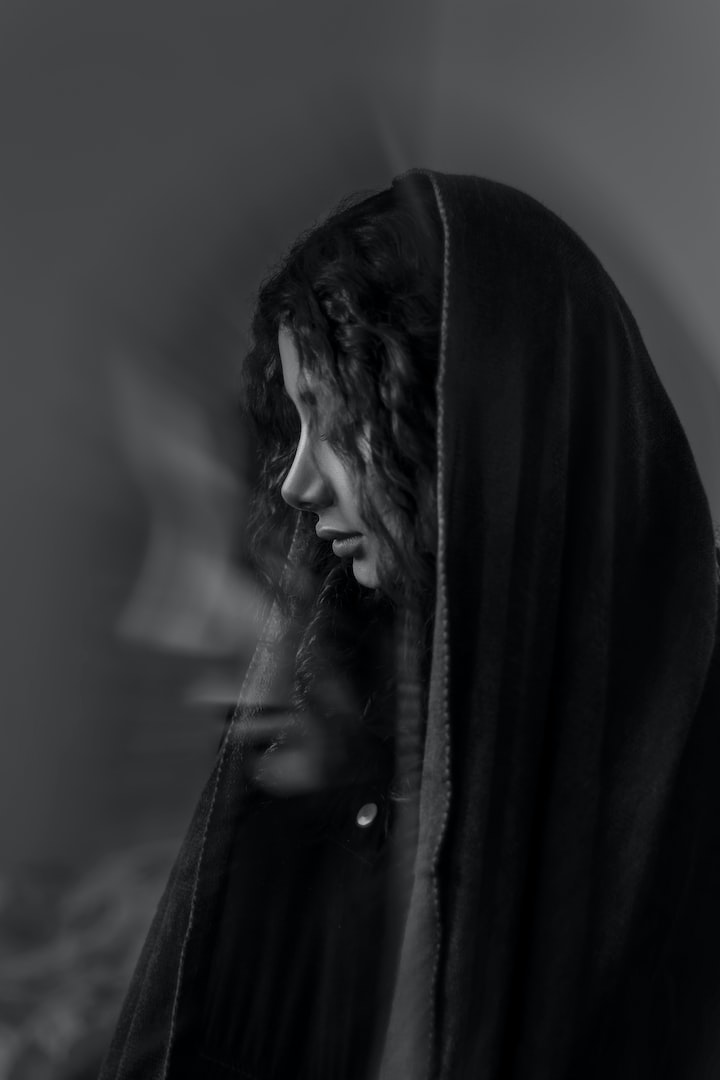 Photo by Mahdi Bafande on Unsplash

Ingrid was a collector of skulls. It remained her hobby and her enjoyment after being cast out of society seven long years ago. She had always been a strange woman. When illness struck her prior commune, it was decided that she must have been the reason. During her trek into unknown regions, she too was afflicted with illness.

She fell into a nearby brook as she gasped for water, feverish and hallucinating. She saw a snake creep up toward her ankles. The water moccasin appeared to have three heads and nearly as many bodies. Dusk was approaching, and she knew no aid was coming to her rescue. Any movement would only attract the snake further, and frankly, she knew she didn't have the energy to escape. If the cottonmouth bit her, it would only be a matter of time before the poison took its effect.

She had begun to wonder if where she was travelling would even have a place for her. She wondered if she would ever truly have a place again. Though she tried not to move, she became emotional in her feverish state and a solitary tear spread down the dirt of her cheeks. It was then that she saw what she believed to be another hallucination.

She heard a screech and saw wings violently flapping around her. She felt claws or what she assumed to be the snake's fangs scrape the skin of her ankle. She thought for sure that she had met her demise. She huddled where she lay for what seemed like hours before opening her eyes. As her fever cooled, she realized that the snake couldn't have scraped her. The snake’s fangs could only pierce. Something else was involved; maybe she unconsciously brushed her ankle against a rock within the brook. Her fever had gone as well which meant no poison had entered her bloodstream as of yet. Either that or she was now a walking apparition, but knowing that she was still in her own body seemed to counter that theory.

She rolled her ankle toward her for further investigation. She had scraped her ankle alright, but the snake was nowhere in sight. She looked further into the stream, but saw only rocks with smooth surfaces and no branches worthy of note. There were no clues as to what had injured her within the brook.

The satchel she carried with the few belongings and rations she had packed lay above her. Feeling well enough to move, she reached for it. She pulled a small cloth out of the pack and dipped it in the brook. As she cleaned the dried blood from her light injury, she noticed that they looked more like claw marks. Despite the wound’s sting, she wondered what creature had saved her; and thanked the heavens that it had at least scared off the snake. She was thankful for the moonlight tonight as well. It seemed that the spirits had at least favored her in her current dilemma. She considered how her peculiar collection of skulls had often served her well as she filled up the goat horn she carried around her neck.

“Let the townspeople drink from the bladders of animals. I’d much rather drink from their heads.” she said out-loud, and laughed.

As much as she had been ostracized and her comment sounded snide, internally she was still deeply troubled. She made that declaration only to console herself, and she knew it. As she moved to the wooded area nearby, she saw an owl perched at the top of a high tree.

“I apologize, oh wise one, it was not a comment I said to your kind. Please forgive me. I did not mean to offend.” she stated as she knelt before the owl’s tree.

The owl regarded her with stiff nonchalance, and she chuckled to herself. Judging the creature as more friend than foe, she found a place to settle in for camp nearby.

Her comrades back in the commune understood owls to be menacing creatures that carried foreboding signs of death and misfortune, but Ingrid felt no distress. She had always found the creature's presence to be peaceful and reassuring. When the morning came, Ingrid awoke to the very same owl's presence she had witnessed the night before. It stayed in its tree, but peered down below watching Ingrid closely. Truthfully, she was pleasantly surprised that she wasn't alone. Within a few moments, however, the owl began to make some strange movements. She watched the owl with revulsion as it contorted its head in various directions. Afterward, it expelled a substantial mass from its beak that landed on the ground nearby Ingrid's feet. The woman noticed a whitish glint come from the mass. She knew the material's look to be noteworthy of an item she was particularly fond of: skulls.

While others would have been terribly disturbed and sickened, Ingrid was overjoyed and fascinated. She must be one of the few to have noticed a habit of such a creature, and today was her lucky day! She wrapped the pellet into a cloth, and decided to pick through the remains later. She thanked the owl for her present, and began to wander through the forest. Ingrid was invigorated with new energy.

An herbalist by trade, Ingrid was discovering all sorts of fascinating things within the woodlands. The further she walked, the more she began to wonder if starting life within another commune was truly what was right for her. She was an unusual refugee she knew few would accept. In this desolate age of plagues, famines, and false-religions, she had learned that at any location she visited she would receive less than a warm welcome. Her last habitation only accepted her for what she could do. Once the medicinal supplies she tinctured herself had dwindled, she was of little use to its inhabitants. Because the medicines she gave them had staved off some of their ailments, she was at least cast out in secret instead of burned alive. Ingrid was undoubtedly considered a witch for her scientific methods, and her unusual interests. Had the town official's daughter not been made well by Ingrid's methods, there was no doubt in Ingrid's mind that she would have been tried and murdered. It had been fortuitous that she had given her the last round of medication in her possession.

Ingrid was filling her satchel with a bounty of items to try in tinctures and salves; roots, bark, moss, berries, and mushrooms were plentiful in this region. It was an herbalist's paradise. She recognized many of the plants from shops she had once visited, and others from locations far outside her last village. She was discovering that this land might not be as desolate as it had once seemed. It appeared lands that remained untouched by human hordes were thriving. She had heard of individuals who forsook traditional human entities and began their own tribes alongside of nature. She assumed those tribes and their lands were unlikely to decline. She liked that idea, but honestly preferred the company of her skulls to that of humans after all this time. She tried to fit in with humanity; she had even given them aid. In the end, she was chased out like vermin; her attempts to belong never ended well.

As she filled her satchel and looked around, she found a cavern nearby a water supply. She considered making such a place her new home, even if it was temporary. She looked inside to find signs of life. A bear skeleton lay at a far corner, which told her who the primary resident used to be. As much as she loved the idea of collecting a bear skull, she was also wary of the cost that could come with that should another live bear return. She studied it carefully before deciding to place herself at risk in the cave's shelter. It was nearly dusk again.

Ingrid built a fire after the day's long journey. She was thankful that her ailment had subsided last night; despite its miraculous disappearance. She created a salve from some of the herbs she collected in the forest to place on her ankle wound. It stung as she applied it, but she was beginning to feel relaxed. She had felt better since seeing the owl in the treetop, and wondered if it was mere coincidence. Upon having that thought, she remembered the treasure she had in her satchel. She unwrapped it carefully, and picked apart its contents.

To her delight and horror, she found something surprising within it. It was unmistakably the skeleton of the snake she had encountered last night.

The size, the shape, and even the remaining skin pieces within the owl's regurgitation looked the same. Could the raptor have been the one who saved Ingrid's life? She wondered, and looked at her ankle with greater intensity. Ingrid took a walk not far outside of the cavern, and looked up to the moonlit sky. She searched the surrounding trees, doubting that the same creature would have followed her. To her awe, she noticed a feathered bird flying high with a rat in its talons. Sure enough, the marks on Ingrid's ankle matched the talons on the wise creature. The owl had scraped her as it grabbed the snake for its next meal.

She watched the creature while it remained in her sightline before heading back to her temporary home. She decided to return back to the place she had seen her savior, if only to give thanks. That was seven long years ago.

"Gylfie, I have your dinner!" Ingrid shouted with a smile. She picked up a mouse from her grain supply. An owl came rushing to the side of the cavern, and picked up the rodent in its beak. Gylfie rested on Ingrid's arm as it swallowed the creature whole. Ingrid had gathered together quite a significant amount of skulls in those seven years. She had even mounted the large bear skull to the side of the cavern to keep unwanted guests away. She fashioned a necklace out of the snake's remains she had found on that night, and wore them as a reminder of her narrow escape. "Without you, Gylife, I wouldn't be here!" she cheered as she touched the collar around her neck thoughtfully.

When Ingrid had returned to the owl's residence in the woods that day, she had found the bird more than considerate of her gratitude. Though she hadn't anticipated gaining a friendship that day, it appeared she piqued his curiosity as much as he had roused hers. The owl drifted nearer to her dwelling each day, and eventually they had found a symbiotic relationship with one another; Ingrid the skull collector, and Gylfie the skull generator. Their friendship was newfound, unlikely, and surprisingly true. One remained steadfast to the other, and got them through tough times. However, as Gylfie grew larger, one joke remained between the two; who would collect whose skull first? That answer is yet to be known.