by Heidi 4 months ago in Short Story

or the times my heart broke 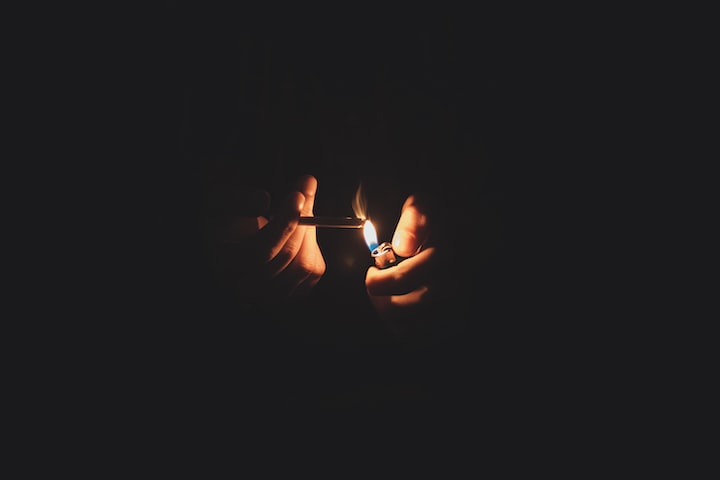 Photo by Ander Burdain on Unsplash

When my dad called me and said, “I’m gonna kill myself for you, so you can take my insurance money,” it felt like a ridiculous joke. But then he started talking about the bible, and Dad never jokes about the bible. “It says it’s okay, baby. If I die for someone else, it ain’t a sin.”

I had been sitting in my car at the park across the street from campus. It was dark, cold, and damn miserable out, but I still smoked then, so I had to be off-campus. And really, there’s no better setting to get that kind of call than a desolate park at night. It suited the mood, reflected the way I felt. The fat moths hitting the streetlight echoed every sharp inhale of my dad’s sobs. When my breath caught, a gust of wind would come through and steal it away.

I don’t even remember what I said or if I said anything that made sense. I just remember hanging up and gasping. My cigarette was out by then, untouched and half gone, burning itself away all on its own. My breaths escaped me every time I tried to pull more in, so I lit the cigarette back up, and it breathed for me. Eventually, my friend Jake showed up and told me to put it out, but I didn’t want fresh air. I needed nicotine. My hands were shaking so hard that I burned a finger while taking a drag, and that was enough to shake me out of my haze.

“Dad said he’s gonna kill himself,” I told him, flicking the ash away. “Said the bible says it’s okay.”

Jake huffed a laugh, “What fucking bible is he reading?”

I shrugged. “I guess the one that says adultery is okay.”

And the ridiculousness of it all comes in, and we laugh. We laughed really hard, and by the time I went back to my dorm, the thought of my dad dying seemed like a joke made in poor taste. Once I woke up for class the next morning, I had a text from Dad saying, “Sorry for last night. I was drunk.”

That was the first time Dad made a call like that. The second time was during a break from college, two years later. I had been outside on the porch with friends, smoking and swapping banter. Dad never really did have the best timing. He used the same fucked up rhetoric, citing God like he was an academic reference for suicide. And every time he said “God” I felt my body heat with righteous fury.

“You can’t say shit like this to me,” I said, waving my cigarette around as I gestured wildly for something to steady me. “I’m not your therapist. I’m your daughter. I can’t handle this.”

He just hung up on me. I got my anger from him after all, and he hated to hear that he’d messed up. I called my aunt right after, urged her to check on him, but she just waved it off and said he was doing it for attention. I guess she was right because the next day, I got another text, “Sorry, babe. I won’t bother you like that again. I was just drunk.” Judging by his spelling, he was still drunk when he sent it.

The last time Dad and I talked, I called him just last week. Another two years had passed, but Dad was in a better place. But Dad had gotten himself a nice girlfriend and quit drinking as much. Didn’t stop completely, just had it every so often. I was doing better, too, having traded cigarettes for vaping. Didn’t really care if there was no difference between them, but it felt like a good change.

“I’m doing real good with Cassie and her kids,” he said. “I feel like they’re my second chance at parenting right. Not that I don’t love you, but now I have the chance to try again. Be a better father.”

Then he started talking about church again, so I zoned out, looked at my vape, and thought to myself, I could really use a cigarette right now.