by Ilyssa Monroe 11 months ago in Series
Report Story 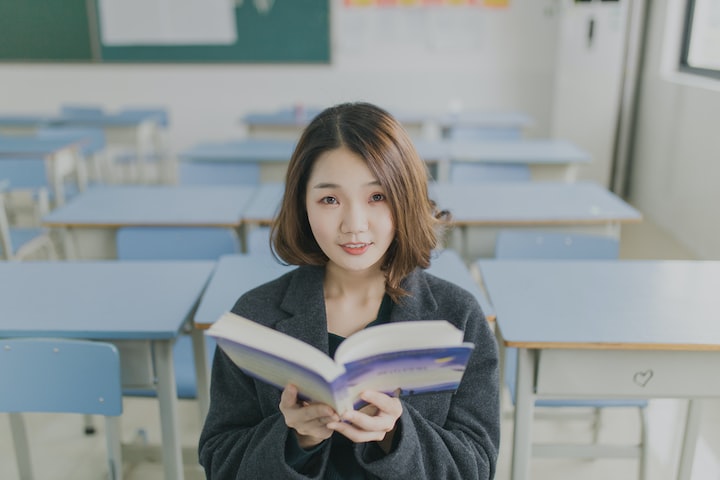 Photo by sean Kong on Unsplash

Sakuri sat on her sofa, stunned. She had just ended a conference with American Director Frank Weiss. She had not realized that she would have even been considered for such a position.

The President had announced, five days ago, that everything she knew and loved would be gone in just two short years. The Cloud, that is what they were calling it, was hurtling through the void on a collision course with Earth.

Sakuri had been born in a small village in Japan’s countryside known as Kurashiki. Her parents had been simple people, her honored father a fisherman, and her honored mother a basket weaver. They had died during a Tsunami that had hit their village when she had been ten years old.

She remembered the traumatic event only in flashes of black and white.

Running while Papa’s strong hand pulled her along.

Mama running with little Akari held tight to her chest.

Papa pushing her up to the lowest branch of a great tree.

“Climb Uri,” Papa had said. “We are right behind you.”

When she had felt the impact of the water against the tree she had looked down. Sakuri had never even heard them scream as the tide of water swept them away. She had been left clutching her infant sister in her arms, afraid that the wave would sweep them away as well.

She could not remember how long they had stayed there but her next memories came to her, crystal clear. They were of a man with ebony skin in a foreign military uniform calling out for survivors.

Lieutenant Javon Wright had been with a US Naval Search and Rescue team and had nearly missed them but for the hungry wail that Akari had let out at just the right moment. The Lieutenant’s attention had snapped to their location when he had heard the sound.

“Over there,” he had called out, pointing in their direction.

The woman at the rotor of the skiff caught sight of them then and had steered the skiff in their direction. When the skiff bumped into the tree, it had swayed dangerously, its roots already loosened by the force of the water.

“Stay right there, darling,” he had said in her own language and mistaking Sakuri’s efforts to not fall out of the massive cedar tree for trying to climb down.

He had then proceeded to pull out a massive metal rod from the floor of the skiff and extended it to its full length. The ebony man had then stuck the rod down in the water. Making a decision, he replaced the rod on the ground next to him and picked up another object.

“Anchor the skiff,” he said to the woman as he jumped out of the skiff.

The new object had two, metal rods that were thicker than the first with metal wire netting attached between the two. He placed the two rods spread far apart from each other behind the tree and hammered them down into the ground, the metal net pressing tightly against the backside of the tree. Held between the net and the skiff, the tree stilled its swaying.

He pulled himself back onto the skiff and then used the skiff's height to reach the lowest hanging branch of the tree. When he had finally pulled himself onto the branch, he began speaking to her again, this time in a soft and soothing voice.

She had shaken her head tentatively.

“Who do you have with you?”

“Is she your little sister?”

She shook her head again.

“If you can pass your sister down to me, Teresa,” he pointed to the woman in the skiff, “will take good care of her until I can help you down too.”

“It will be okay. You will both be able to get something to eat and a nice warm blanket,” he had said, encouragingly.

Sakuri sat there for a moment before eventually lift the sling of the wrap her little sister was held in over her head. His arm was outstretched, supporting her sister’s weight from the bottom as she did so.

When Akari was safely cradled in his arms with the sling now around his own neck, he climbed back down to the skiff to hand the infant over to the woman. As he turned around, Sakuri was waiting on the lowest branch where he had been only a moment before.

“Looks like you’re a little climber,” he chuckled. He stretched out his arms and Sakuri had jumped into his arms.

Lieutenant Javon Wright and his wife Ichika had fostered her and her little sister for a few months while every effort was made to find their closest living kin. When no one could be found, they had chosen to adopt them.

Sakuri had decided that she wanted to do what her adopted father did. She had decided at the age of ten to become a person that would save other people who had been victims of disasters.

They had moved to the United States six months after the adoption was completed. She had quickly picked up the English language as Javon had taught her. Since she learned it quickly, Javon began to teach her Spanish. He knew sixteen different languages and when she asked him why he knew so many, he had explained.

“It is because I never know where I will be sent to rescue other people.”

From that point on, Sakuri had studied hard, not only to learn different languages but to learn as many different cultures as she could. She had traveled all over the world. Some of that travel had been during deployments that she accompanied Javon and Icthita on when she was younger, some had been during her time in the international exchange student program when she was sixteen and seventeen, and some had been when she was serving her own four years in the Navy after she had turned eighteen.

Sakuri had been to eighteen countries, knew over twenty-six languages, and even more dialects. Now she was in her own small flat and attending Stanford University to receive a formal education. She did not think that her accomplishments were that great. Sure, they were great to her personally, but she did not think that they would be that important to anyone else.

“Good afternoon, darling,” he answered the com in Portuguese. He did that a lot. Answering the com in a different language each time.

“Good afternoon to you too, Pa,” she responded promptly in the same language.

“I never could stump you, little parrot,” he said, speaking in English now.

His image on the holo-com brought her peace each time she saw it. He had aged very little since she had met him so long ago. The only signs of aging that he possessed were small crow’s feet that spread from the corners of his smiling eyes and a light dusting of silver in his dark brown hair that swept back from his temples and peppered his well-groomed goatee.

“I just received a call from Director Wiess at USSF.”

“Did you now?” he asked, not sounding surprised in the least.

“What did you do?” she asked, suspicious.

“Then how did you know?”

“I wasn’t entirely sure if you would receive a call for this migration but since Teresa in part of the UMC, I had a feeling that your name might come up,” he explained.

“They are going to need someone with your skillset if this migration is going to work. There are going to be thousands of kids, from all over the world, crammed into one vehicle, for a very long time. They are going to need to understand each other’s cultures and languages or there will be a lot of discord and strife,” he said, his visage becoming serious.

“I am sending in an application for Kari. From what Teresa has said, they are trying to keep families together. Unfortunately, active military are being actively excluded. Something about politics,” he grumbled. “Kari is, however, in the perfect age group.”

“Sir,” a woman’s voice said in the background.

“Captain, Sir, two French EC145s are approaching, they claim to be carrying supplies for the UMC. Do they have permission to land?” the woman asked.

“Yes, Lieutenant. I will be there in a moment to personally greet them, thank you, Lieutenant.”

“Love you too, Pa,” she responded as com cut off.