by Aidan Ansberry 11 days ago in Short Story

One Jacket, One Hundred Stories 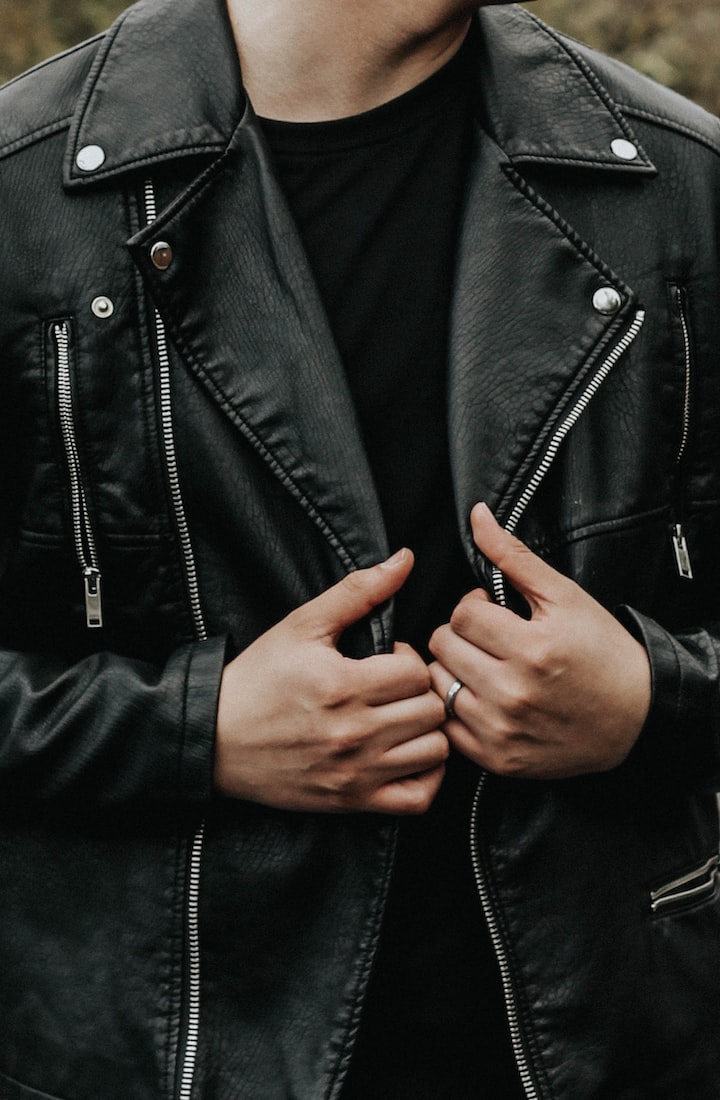 Photo by Adrian Ordonez on Unsplash

Stories can be told across many different mediums. In this case, a simple black leather jacket. Nothing special about it, just an old, worn jacket hanging up at a used clothing store. A young man, who had been to this store numerous times in hopes of finding a good deal, was doing a final walkthrough. He sighed and shook his head, ready to be disappointed yet again before setting his eyes upon a cross-zip, black motorcycle jacket. He tried it on and sure enough, it fit, almost as if it was made for him. He happily bought it and wore it out of the store, smiling for the first time in a long time.

The young man that day saw a nice-looking leather jacket. A little worn, but just enough to make it look storied, not old. And storied it was. He didn't see the first man who wore it. A kid fresh out of high school looking for something to make him look tough and impress the girls. He didn't see the confidence it gave that man to make mistakes he never would've made had he not learned to take a chance. The first girl he kissed, the first party he went to, the first fight he got in was in this jacket. Sadly, he wore the jacket to a college football game one night and forgot it in the stands. When he went back for it, it was already gone.

Another student happened to find that jacket and loved it enough to take it before its rightful owner found it. This young man was a troubled individual. His lack of impulse control and drug use got him kicked out of college, fired from his job, and eventually out onto the cold, lonely streets. The only thing he had to keep him comfortable was the ever-reliable leather jacket. He felt alone in this cold world, but in that jacket, he felt a warmth he remembered from his early childhood. He wore the jacket every day and night until he had a stroke of luck. He met a girl. She was on the street like him, and it was love at first sight. He only took off the jacket when he let her wear it, to keep her warm as it kept him warm. It kept her warm each night he let her wear it, including the night she ran away from him. He lost his battle against addiction and started using again, and to maintain her sobriety, she had to leave.

Her story may have started a little harder than others, but it ends much happier. After she left, she maintained her sobriety and worked her way to a drug and alcohol counselor, helping those in situations like she once found herself in. She met an amazing man and they got married less than a year later. With her life moving forward, she had to let go of the past. This was the first time the leather jacket found itself in a used clothing store. Luckily enough the jacket wasn't stuck there for long. It was nearly October, and a group of friends was planning on throwing an 80s themed party. Many members of the group already had their costumes ready to go, but one young man was missing a vital part of his costume. That's right, a leather jacket. The moment he laid his eyes on it, he knew he needed to buy it.

That party was less than exciting. It died much too early and left the group sitting around the house, bored out of their minds. They debated on what to do until one of them announced they knew of another party a different friend was throwing in the woods. They all excitedly collected their belongings and some extra alcohol to make up for being late and set off on their way. They were happily received and the night was saved! The leather jacket loyally hugged its owner and kept him warm against the night's chill as he danced and drank and talked to who would become the first woman to break his heart. The jacket stood vigil, crumpled up on the leaf-strewn floor as the two made love. It silently hugged him weeks later when that very same girl told him she wasn't interested in anything more with him, that it was just a one-night thing. It was the only one that held him, the only one that saw his tears. That pain led to growth, and in the following years, he became a successful travel writer. He traveled around the world, writing about his experiences and sharing them with the thousands who would read his blog and follow his many TV appearances. As his popularity grew, so did his bank account, and soon enough it was time for new clothes, and yes, that included a new jacket. Instead of donating or selling it, he decided to leave it at one of the many bars he visited. After a few weeks, the jacket left the lost and found with the bartender.

Sadly, the night the bartender took the jacket, he was robbed on the way home. He took off the jacket and handed it over along with his wallet and phone. The robber took no interest in the jacket and tossed it aside as he told his victim to leave. The jacket was forgotten and sat there for many days until a man on his morning run found it. It looked nothing like it used to in its former glory. It was soaked and had a funny smell to it, but the man knew it was special. He took it home and had it cleaned. His wife wasn't too keen on him owning a "street jacket" as she put it, but even she had to admit it looked nice. Instead of tossing or donating it, she took it to a used clothing store and sold it for next to nothing. There it sat until a young man, ready to be disappointed with yet another wasted trip to the store found it and wore it home. After so many owners, so many stories, the jacket finally found who it truly belonged to.

He lived a simple life, from the moment he bought the jacket through buying his first house, meeting his wife, having his first kid, then his second, and finally his third. Through every fight, every moment of jealousy, every date night, every amazing memory he made with his family, the jacket dutifully clung to his shoulders, sitting back like a wallflower along every journey they went on. The jacket followed honorably, even up to the moment the man sat his eldest son down, handed him the jacket, and told him as much of the story as he knew. He looked into his son's eyes and said "I've taken this jacket to hell and back. Continue its story, for me."

Working to live the adventures I write