Beings In The Mirror

You may not always see them, but they're there. 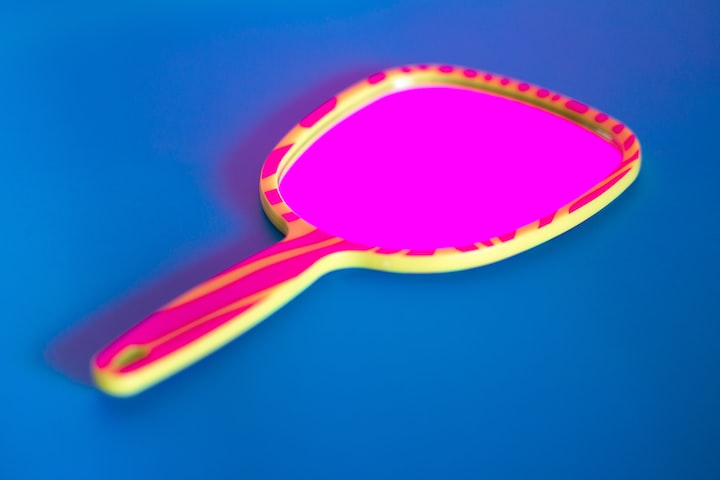 Photo by Ruvim Noga on Unsplash

Selma’s in charge of tonight’s run. She picked the young woman with the long black wavy hair in 11 whose coarse hair strands are found everywhere. They're under rugs, strewn on door and cabinet handles... there are balls of it inside the sink drain, nearly clogging up her pipes.

I’ve seen the woman become frustrated when she’d find it in her food—the food we’d been watching. We often put it there in hopes she’d throw her plate out but she never does. She washes everything and puts uneaten food in the freezing box—even the food scraps from the sink strainer—to prevent the flies from laying eggs in her garbage.

So much food wasted and feasted upon by maggots. I don’t mind maggots much, as long as they share. Selma hates them. As for the freezing box, we can’t get inside; it’s much too cold and the door is heavy. We’ve already lost Butch in room 12’s box. It was hard on everyone. Besides, frozen berries are very hard to carry.

“Darn, it looks like she’s still up. It might be another long night boys,” Selma said, leaning out of the girl’s wall mirror. The girl was on her device watching a moving picture about how to tell mock turquoise stones from real ones. The English narrator's voice made me chuckle.

“That’s a good idea Bug, I do always carry a pouch full of Valerian root powder,” I added, proudly patting the cloth pouch hanging on my waistband.

“I’m in charge and that’s against the rules—my rules. We don’t put things in humans’ foodstuff… remember what happened with the boy in 14?” Selma said, a stalwart look on her face. Shivers ran up her spine as she recalled with regret the humongous pus-filled itchy bright red warts that grew out of the boy. "We could hear his constant wailing from the other side!"

“You like her too much Selma…” Bug said, watching the woman closely. When the hairy woman turned to face the wall, he jumped out of her mirror and zipped to the kitchen. Selma rolled her eyes.

Once we leave the mirror, we have approximately 10 seconds until our invisibility wears out; 10 seconds until human eyes can see us and crush us to oblivion. Sometimes, we jump in and out of mirrors for more time. We also leave little or broken mirrors laying around just in case. So, if you stumble across a mirror on a walk, leave it there lest you want a case of the mysterious itchy red warts—or unexplained sleepy-head syndrome!

On her bed, still distracted by her device, the woman began to shift. Although we usually operate while humans are sleeping, we may have enough time to take what we can in her kitchen and leave without being noticed. Selma watched her closely, almost adoringly.

Bug returned holding a dark brown fluffy thing as big as his head, which I’ve never seen before. “Is it delicious?” I ask.

“Come on and try it! There’s plenty where that came from! There is a whole slice of gushy chocolate cake on her counter, behind the wall!” he said, devouring it in an instant mouthful to my disappointment.

“Maybe it’s her birthday. Or maybe she’s sad,” Selma said, her eyes glued to the woman. “She almost cried the other day, I saw her. She hates crying.”

I peak out of the mirror and look at the giant woman whose cake I was about to steal. She is in her undies, with a blanket draped across her mosquito-bitten legs. She simply looks like she is resting but maybe Selma was right, maybe she is sad. Did she lose somebody too? Someone to her like Butch was to me? A friend? A brother? I pull my head back in.

Just then, a loud thud comes from the other side. Selma grips her hat, her already big eyes widen. Her little four-finger hand shoots up to her chest as if to stop her heart from jumping out. I stick my head out of the mirror again to find the girl laying on her back, staring at the ceiling with a blank expression. Her phone is now face up on the floor, one long leap from our shared wall mirror—our doorway into the human world. She takes a pillow and places it just on top of her eyes, as if a sleeping mask.

“I’m going into her phone to see what I can find,” Selma said, a determined look on her face. She takes a few steps back and readies herself for a long jump. “Here I go!” Running at light speed into the black mirror, it sucks her in like a vacuum.

For us little people, a little goes a long way. We aren’t very picky. The wet food scraps from the sink often taste yummy enough; all we have to do is to pat it dry and mix it with our favorites, such as Spring beauty, Lilac blossoms, Honey mesquite, Mallow, and Dwarf pawpaw! Well… except for the meat. The meat is foul after it’s been wet with soapy water, and besides, Selma is vegetarian and she’ll never let us bring back any meat. She and I love pasta especially, we make it crunchy by placing it under a microscope. Bug prefers crunchy rice.

My stomach grumbles—I wonder if Selma will be upset if I run into the kitchen to grab a bit of chocolate cake while she’s gone? Besides, the petite giant human probably won’t notice.

Just as I was getting ready to dash into the kitchen, Selma leaps out of the black screen and into our mirror. Her shoe catches on the bottom edge, causing her to fall on her face. She quickly gets up and dusts the grass off her beige trousers, which are now stained a bright green on both knees.

“Ouch…” she says, rubbing her knees. She stretches her neck and rolls her shoulders back.

“Alright,” Selma said, gathering herself. She seems both excited and distracted. “She just broke up with some guy. It looks like she bought the cake for herself to feel better. The good news is, she doesn’t want to gain weight, so she hasn't eaten it.”

“I saw her text messages and her ‘to buy’ list on her phone,” explains Selma. “Fellas, I think we can take some of that cake without any guilt. We’ll be doing her a favor after all!”

We all jump for joy and dash into the woman’s kitchen feeling relieved that we wouldn’t be eating her birthday cake, as that would be cruel even for our standards.

On the counter was a glorious, shiny, moist slice of dark brown chocolate cake with a perforated plastic cover on the top. Selma and Bug shrink to fit in the holes and start filling their large sacks with cake once inside. I scurry to the sink drain to check for leftover pasta and rice but there was nothing; she had cleaned the sink spotless.

As I get ready to jump to the counter, the woman appears, rubbing her eye. She's walking towards the slice. I quickly send a message of distress to Bug and Selma and they both transform into fairyflies, burrowing in the hollow crevices of the fluffy brown cake.

I turn into a baby cockroach, for they are fast. I bolt behind a tea kettle and catch a glimpse of the time on the stove. It is fifteen past four in the morning and my, my, my, this lady should be sleeping! She must’ve been awake this entire time!

The woman grabs a fork and takes a chunk out of the tip of the soft cake; the chocolate ganache on top and in the middle looks delectable as it sticks to the back of her golden fork. I lick my lips, then panic slightly.

Was Bug and Selma in her mouth? No... no... they wouldn't be. While they were cutting it close, they have good senses and must have dug further into the slice. I try to locate them but even with my extra-long cockroach antenna, I still can't reach them—the layers of moist cake must be obstructing our communication.

I watch the human take another small bite then walk back to her bedroom. Her eyes looked swollen and tired. As she disappears from view I hear a door shut and a light switch go on, followed by a fan. She is in her bathroom. I race to the cake and fill my sack, all while looking for Bug and Selma.

A pair of antennae come out from one of the cake holes, and Selma in another. I breathe a sigh of relief. With our sacks full, we can go back to the village.

Selma and Bug quickly turn into baby cockroaches. Selma signals us back to the mirror while the woman is still in the bathroom; we could hear the fan quite well from the kitchen. I nod in agreement and the two of them scramble away.

As I exit the cocoa cavern, my sack of Valerian root powder gets caught in a moist pocket and explodes in the cake.

Uh oh—Selma will be very angry! Unless… I don’t speak of it…

I hear the woman turn the faucet on, giving me plenty of time. I scamper to the mirror as fast as I can, nearly stumbling over her hair strands all over the floor. For some extra invisibility as I sense she is to exit the bathroom at any moment now, I leap into the black mirror of her device.

Feeling curious, I go to her opened tabs. That’s when I see it—her anonymous lilac blog about her various romances. It appears she is searching for her Prince Charming and vetting out incompatible toads. Was that why she "almost cried"? Hearing footsteps approaching, I leap into the wall mirror. Bug and Selma are sitting on their sacks waiting for me.

“The Sow thistle worked really well for extending the portal, huh Bug?” Selma says. She cheerfully slings the large sack full of cake over her shoulder.

“Oh yeah! Sure, sure, sure!” says Bug, dragging his packed sack behind him. We walk toward the village square.

I consider telling Selma and Bug about what happened with the powder but go against it... for now. If we return anytime soon, Selma will discover for herself. Besides, the hairy lady will be sleeping for a very, very, very, long time—my Valerian root powder is the most potent of all!—giving her a better chance of finding her Prince Charming. I will do my best to assist her, in return for my grave mistake.

Because the lady in Room 11 will be asleep for much longer than normal, she will have plenty of time to explore the Dream World and find her Prince Charming. Perhaps I can help him wake her up with a kiss! Well, unless the humans pull the plug on her body. But I won’t let that happen—and maybe, with Selma and Bug’s help (given I tell them), no one will suspect a thing! No one will know that the real her is really sleeping. It will be a piece of cake...