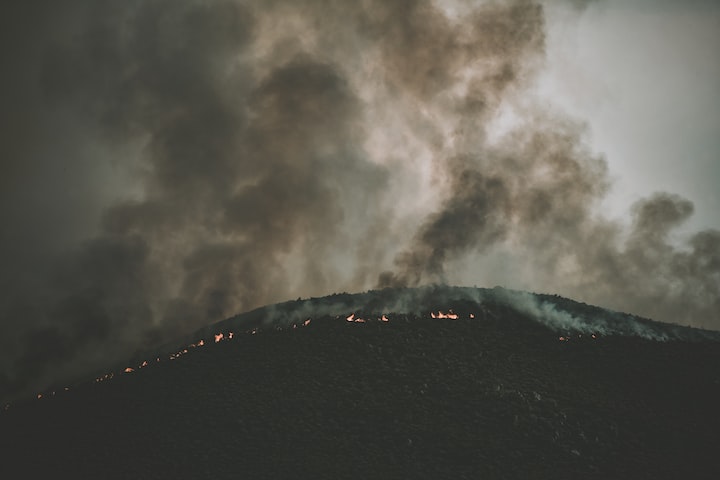 It had been the Apocolypse of all apocalypses… apocolypsi? He made a note to ask them once he arrived. He wondered how this would happen, would they fight him? Try to send him down? Pull him up? A grin crossed his face briefly before it resumed a frowning focus. Climbing through the rubble was no easy feat, and as he finally neared the top and saw the two women playing chess he let out a heaving sigh of relief. They seemed to take note of him as well, looking up from their game to glance his way. In mirrored movements they regarded the man panting and clambering up towards them, covered in dirt and sweat. The man appeared to be in his mid-twenties, with dirty blond hair just long enough to brush against his long lashes as warm brown eyes looked up at the women. Finally, he reached the peak and hoisted himself to a full stand, placing hands on his hips and arching back for a few deep breaths. The man coughed and wheezed, beginning to brush the dirt from his clothing.

God was first to stand, and as the darker-skinned woman with jet black hair and golden eyes made her way towards the man, she regarded him with much curiosity. The last soul left – the only soul that had been deemed completely neutral and therefore had stayed behind, unable to be raised up nor pulled down. This soul was rare indeed, needing to be more thoroughly evaluated, and judged by the two women until a unanimous decision was made on its fate.

“Welcome.” Her voice was loud and commanding, like that of a new teacher on the first day of class. The man wiped the sweat from his brow, leaving a smudge of dirt across his face, and squinted at her, still trying to catch his breath.

“Give the poor thing a moment, can’t you see he’s exhausted?” Lucifer scoffed at her mother and rolled her baby blue eyes. Grabbing her glass from the table, she stood and quickly made her way over to the man. She looked nearly the contrast image of her mother, skin as pale as her mother’s was dark, hair as white as God’s was ebony. The Devil offered her water to him with a grin. “She’s just excited because there’s never been someone like you. Though I can’t say I’m not a bit riled up myself, I haven’t had the pleasure of a personal judgment in eons.”

The man eyed them both, still not speaking but giving a thankful nod as he took the water from Lucifer. Gulping the liquid down he was grateful for the relief the cold water had provided and he handed the empty glass back to the pale woman. Finally, in a voice much deeper than would be expected to come from his average-looking form, the man spoke.

“Thank you, both of you, though I believe there may have been some confusion. I’m not here to be judged by either of you.” He brushed a few more areas of dirt from his disheveled shirt and the two women glanced at each other before both returning a curious gaze to him.

“It is the end of times. You are a neutral soul, otherwise, Fate would have already weighed and placed you. However, since that has not happened -” God had lowered her voice, a tone of sympathy added in. Lucifer jumped in, like an eager teenager.

“We get to spend some time with you and see if your soul would be better fit down in party town with me…” she winked, her sky blue eyes twinkling before her face turned into a playful pout. “Or playing harps or …knitting or …whatever boring things Mom and silly angels do up there.” Lucifer looked over at her mother, a slight annoyance and something darker slid through her eyes for a brief moment before she turned back to the man. “Do you play chess?”

The man looked back and forth between them both, nearly slackjawed. It wasn’t that he didn’t believe what they were telling him. He fully knew who they both were. What stunned him was that neither Lucifer nor God herself recognized him. They seemed completely oblivious to who he was, how was that possible? His mouth opened and closed a few times, brow furrowing as his hands seemed to reach around for what to say. Pinching the brow of his nose he squinted hard at them for a long moment before sighing, dropping his hand, and clearing his throat.

“Ladies, I understand what you think this is but…” he took a step forward, making solid eye contact with each one of them a moment longer before continuing when they still showed no sign of recognition.

“God, Lucifer… I am the one that is here for you. Do you truly not know who I am?” It was now his voice that held gentle sympathy. The women looked at each other again, their confusion growing. God tilted her head as she turned back, her eyes looking harder at the man.

“Um, what?” Lucifer put her hands on her hips and frowned.

The man blinked and arched a brow. He hadn’t expected this to happen to them too. He had thought Lucifer would certainly have recognized him for all of the work he had done for her over the years. God was the true puzzle; how she hadn’t seen the truth of him right away would stump him for the rest of his eternal existence. Which, as it so happens, wasn’t going to be much longer. He sighed.

“You were right about one thing, it is the end of times. It is - in fact, the final end. Of all times. Which is why I am here for you both. At the end of the end… even the powerful Lucifer and the mother, the great God herself… must meet Death.”

The man reached out both hands, one extended towards each woman. They were clenched into fists, fingers wrapped tightly around something. Slowly he turned them over, uncurling his fingers to reveal the black King and the white King from the chessboard resting in his palms. He gave a solemn nod.

Reading books has always been my escape & that's greatly influenced my own writing styles. Fantasy, Horror, Mystery, Thriller - taking folk or fairy tales & twisting them inside out, dangerous romance - I love to write. You've been warned.

More stories from Danielle Snyder and writers in Fiction and other communities.