by Elisha Allman 5 months ago in Short Story 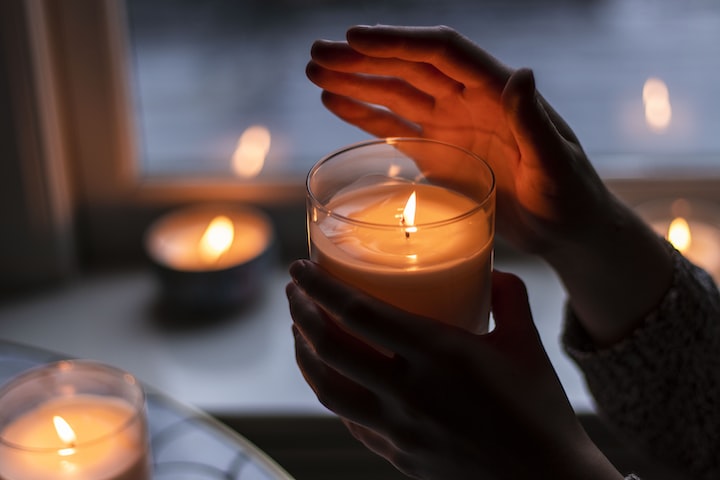 Photo by Rebecca Peterson-Hall on Unsplash

Such a beautiful Saturday, too bad I have to work, but at least I’m the boss. Owning Toromatherapy, a homemade aromatherapy candle store, definitely makes me excited each day. I also can’t really complain about my new Saturday hours as they were becoming very lucrative for sales revenue.

I smiled to myself and began to hum. Dancing through the storefront door I caught myself in a full-length mirror. Stopping quickly, I moved my head side to side to check out my newly buffed horns. I saw my tie was crooked so I set my coffee and bear claw on the counter to adjust it.

“Looking pretty good if I do say so myself. You handsome bull you!” Feeling myself today, I gave my reflection a huge, pearly smile. For a bull I could really pull off a dress shirt with skinny jeans fairly well.

Smoothing my dress shirt, I moved to shut the door and flip my sign to open, when the door came flying open, smacking me. I fell back dazed, trying to shake the fog. I started focusing on whomever entered my shop. Blinking, I was slowly gaining clarity.

Mrs. Johnson, who had come through like a fireman on a 911 call, was standing over me. “Mr. Toro? Bill? Are you OK? I’m so sorry! I think I opened the door and cracked you good. I can see a lump on your forehead. Let’s get you up onto a seat.”

Before I could digest what she said I was on my feet. She must have the strength of 10 men! She lifted me like a rag doll. I put my hand on her shoulder to balance and began walking toward the lounge sofa. “Thank you Mrs. Johnson. I’m sure I’m fine, but I have to say your strength is impressive. Mental Note: I hope we never meet like this again.” I began to laugh, causing her to giggle.

We smiled at one another as we sat on the sofa. “Are you sure you’re OK Bill? You look kind of peaky.” She softly touched my forehead as the knot was swelling quickly.

“I’m fine Mrs. Johnson. This isn’t the first knot I’ve had on my head, nor will it be the last.” I gave her a grin and we both seemed calmer. “So, anyway, was there something you were seeking? It seems like it’s important considering how fast you came inside.” I saw her face change dramatically.

Mrs. Johnson, now back to her reason for being in my store, began to cry. “Bill, you have to help me. You remember my husband Larry, right?”

I nodded. Her husband was unforgettable. Larry was on his own level and for me, as a recovering angry bull, to say that speaks volumes. Having seen him angry before I could only imagine what she was going through. He was ornery on a good day, but once someone lit Larry’s fuse he turned into an entirely different person

“OK Good, Larry’s really stuck his fist in it this time. I told him not to go to the pub last night. I had a bad feeling so I asked him to stay home. He laughed at me and went anyway. Long story short, Larry’s in jail for punching a cop, who was helping the pub owner get Larry out of her establishment. Apparently, he started a fight over the game and made a complete ass of himself.

She reached over to the coffee table and grabbed a tissue to dab her eyes. “His temper has gotten so out of control; I simply don’t know what to do anymore. I don’t want to pick Larry up from jail until I have a plan for handling this situation. His anger is lasting longer and escalating faster than it ever has since I’ve known him.”

Staring off into space, she continued, “That’s why I’m here. I know you had major anger issues throughout your life and how hard you’ve worked to turn your life around. Aromatherapy and counseling have brought you to an amazing mental place. This shop is a testament to your accomplishments,” she made a sweeping gesture towards the candles, “Aromatherapy seems to have done wonders for you. I didn’t know if maybe you would have ideas on how to get Larry’s anger under control.”

Stopping abruptly, she looked pleadingly for me to help her. “Well Mrs. Johnson, I have to be honest. All beings are different so one answer doesn’t work for everyone. I’ve been working on my anger management for years and I never gained clarity until found aromatherapy. As you said, it really changed my life. I used to be the bull no one wanted to see because I have a short fuse and once lit there’s no stopping my destruction.”

I stood up, grabbed the tissues, placing the box in her lap, and sat down to continue. “I had to come to terms with my issues. If I hadn’t worked to find ways to manage my anger I would be in the cell next to Larry. Do you think he wants help with his anger?”

She began to nod, “He has no choice. The Sheriff said if his temper doesn’t get under control they will be forced to charge him the next time and the odds are high he’ll do jail time. Usually, they put him in the drunk tank so he can sleep it off, but they’re done being nice. He has to find a solution or he will end up in jail.” She started sobbing again and began to blow her nose, sounding like a congested trumpet, into a handful of tissues.

“Anger management classes and counseling helped me in the beginning. It helped me to understand myself better so when I put the aromatherapy into the mix my inner peace stayed longer, I felt happier, and less negative. I suggest you find a counselor and some anger management meetings. It helped me feel less alone, but now I am able to maintain through aromatherapy, which I still find amazing. Mind over matter, as they say. I’m more than happy to give you a couple candles to see if they help him.”

Her eyes wide with hope, mascara running down her face. “You really think this can work?

“Yes I do. But as I said, everyone’s different so just because this worked for me doesn’t mean it’ll work for him.” I pulled one of my relaxation candles off the shelf along with an anger-inhibitor candle. “These two are my best-sellers. If any aromatherapy is going to work for your husband it would be these two candles. The first is ‘Coc-o-nutty.’ A beautiful coconut smelling beachy vibe candle for inner peace and relaxation. The second is a lavender candle called, “Perfect Peace,” which has a Ylang Ylang infusion to defuse anger before it gets out of control.”

Setting them on the counter I bent down to grab a bag for them. Mrs. Johnson seemed much calmer now that we had a plan. She picked up each candle and lifted the lid to smell. She set the candles back down, closing her eyes, this huge smile came across her face. Either the aromatherapy was working or she was going through some sort of chemical imbalance.

I chose to believe the candles were working so I put them in a bag and gave them to her. “No charge for these. Let’s see if they help before we invest too much into aromatherapy as a recovery tool for your husband.”

“Thank you so much! I have faith this is going to work. If he turns out half as good as you I’ll count myself lucky.” She patted my hand lightly and gave me a huge smile.

“I hope it does Mrs. Johnson. I know how hard it can be to have anger issues, but once he can find peace you’ll begin to see major differences. You’ll know right away if the candles are working because the first two days the body adapts to the candle’s aroma therapy, which begins to change the user’s perspectives on negativity. They begin to see how they treat others and how it affects their family. If Larry seems a little off don’t worry, it’s working and you’ll see a 60% change in his attitude over the next 48 hours.”

“I’m game! I’m willing to try anything and I truly believe that if you don’t try you’ll never know. I’m going to get Larry out of jail and take him home. We’ll find out tonight if these will work.” She shook the bag at me and thanked me again as she left the store.

Bill didn’t have to wait long to find out. It was Monday, once again.

Coffee and Bear Claw in hand I unlocked the shop door and flipped the open sign. Once again, Mrs. Johnson came flying through the door as if she was a S.W.A.T. member rushing to defuse a bomb. The door smacked me in the same spot as yesterday and I fell straight back onto the floor.

Rubbing my forehead, I sat on the floor looking up at Mrs. Johnson. “Good morning Mrs. Johnson. I take it by your speed that the aromatherapy isn’t working and you want to see if I can suggest some counselors?” Hauling me off the floor with the strength of 10 men Mrs. Johnson pulled me close.

“How can I ever repay you? I don’t even believe it. I lit one candle on the first floor and the other on the second. Within hours he was not only calm, but he was also nice! Larry hasn’t been nice to me in years. I may not have to get a divorce and I have no idea how to express my appreciation for you. All of your research over the years has allowed me to see some small, but quick changes in my husband. If I can see this much change in 24 hours I can only imagine how he’ll be after a year of aromatherapy plus counseling. I have never seen anything like it. He’s even nicer than the Larry I met!”

“I ‘m so happy to hear that it’s working for Larry, and you too by the sounds. When you’re near the candle end come back and I’ll give you a special bundle price for the next round of therapy candles.

Mrs. Johnson began to smile so wide her eyes seemed to disappear. “I just can’t thank you enough Bill! You truly are a life saver, but I’m not out of the woods completely. What do you have for moody, overbearing mothers-in-law?”

I love to write and have been the recipient of academic accolades for my story telling abilities and creative writing skills.

Creativity has always been my raison d'etre & I don't see it changing....

Read next: The Beast