by E.L. Martin 23 days ago in Short Story · updated 23 days ago
Report Story 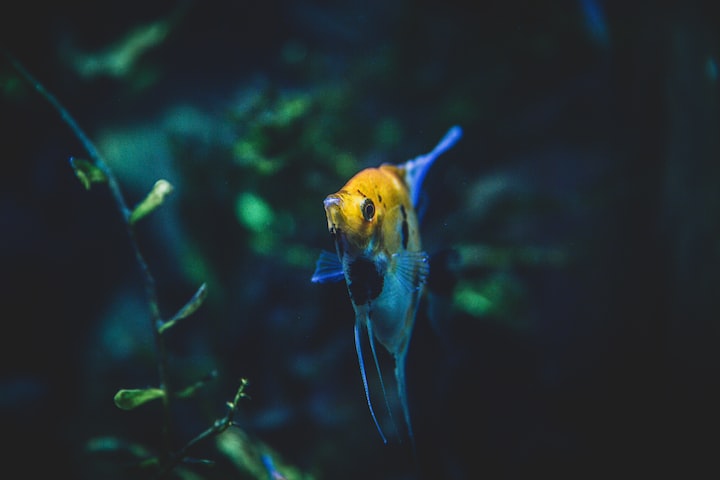 Photo by Max Letek on Unsplash

"He does know that you can buy freshwater angelfish to keep at home, right? Like, he doesn't have to come here to see them." she responded.

"Yes, he knows. He donated that fish here a few years ago. Said he couldn't take care of her at home, but he comes to see her every day." he responded.

"So, does the owner of this aquarium know about him?" she inquired.

"Yes, on a first name basis. He's one of the few "blue badges" around here. That means he purchased an unlimited pass. He is even allowed to feed the fish or drop inside the tank if he wants, but the only tank I've ever seen him stop by is that one."

"So, he comes to the aquarium and purchases an expensive membership pass just to see his own former fish?" the girl returned in confusion.

"That seems to be the case." her trainer sighed.

"Sad, hopeless, really...he must be awfully lonely" the girl commented.

"I guess most old people are. Old people are the only ones that seem to come to the aquarium lately. Oh, and several students, teachers, and parents on field trips and holidays. Man, are those days a nightmare! But, old Bern never asks for anything. He never really interacts with anyone that I've ever seen other than basic manners and exchanges of money. He'll sit in our lobby sometimes and just read a book or look at old photo albums. I always thought those were activities you'd do at home, but he always seems comfortable here. We just leave him be, but you'll see him a lot. Now, come on, let me take you to the shark tanks. Those are much more exciting!" he stated.

The girl glanced back at the elderly gentleman, secretly hoping that she would never wind up in the same situation he was in.

A few hours later, she noticed Bern back over by the fish tanks. The fish, which she assumed to be his, was looking right back at him.

“It’s like she knows and remembers you.” the new girl gaped in wonder.

The elderly man let out a chuckle.

“That is because she does." an authoritative, yet feminine voice called from behind them, “Nice to see you, Bern. I see you’ve met our new recruit.”

“Sorry young miss, Bern Oldaker here, it’s a pleasure to meet you.” he said in his warmest voice.

“Yes, nice to meet you too. Ms. Swanson, did you say that his fish does recognize him?” the girl inquired.

“Yes, angelfish are quite intelligent. They remember their owners like long-time companions. Don’t they, Mr. Oldaker?” Ms. Swanson, the aquarium’s director, affirmed.

“Yes, she’ll always be my girl.” he smiled wistfully.

“I’ve never seen a fish attach to anyone before.” the girl stated.

“Some fish can attach to people very similarly to the companionship of other animals. They may not be as affectionate as cats or dogs, but they do demonstrate fondness for those they care for and recognize just like Miss Felicity here, right Mr. Oldaker? ” Ms. Swanson explained.

“Yes, Felicity knows me well. She would be sad if I didn’t visit her as often, or perhaps, I would be the one that was sad. Though, she does still always get excited to see me. My wife was often jealous that Felicity was always more excited to see me than her. I told her it was because I did most of the fish feeding, but it was our little running joke.” He half-smiled before continuing, “She was a fish my wife chose when she was still alive, our happy little bundle of joy. We couldn’t have kids, but we both ran quite the successful hatchery. Felicity and her mate were the ones we kept for ourselves. Their markings were beautiful, and they’d play several little pranks on each other if you’d watch them long enough. They reminded us of us when we were younger.”

“Oh, I’m sorry to hear that.” The girl mumbled.

“I bet you wonder why she is here when I care so much for her?” the man asked, “It’s quite alright. Much of the staff here wonders the same thing, although those like Ms. Swanson here already know. The day my wife passed, Felicity’s mate passed as well. Tank angelfish are typically monogamous creatures, much like yours truly here. However, they are also territorial. The four other fish that remained in her tank were couples. Felicity would be displaced at our hatchery. It was either move Felicity into seclusion or into a larger tank. Without my wife, I had no desire to continue running the hatchery. It was our dream, and now we are us no longer. In our partners' absence, Felicity and I were both displaced, so I began searching. I found this aquarium along the way. Some aquariums don’t offer freshwater fish exhibits, but this one did. I knew right then that I was gifted an answer. I spoke to the director, and she offered us both a place here: me as a welcomed guest, and Felicity as a beloved resident. I can’t thank you enough, Ms. Swanson.”

“Happy to help, Mr. Oldaker.” the woman blushed through wrinkles.

“I’ve been looking everywhere for you!” the lad shouted before noticing the director. He promptly changed his dialogue. “Ah, oh, sorry! Good afternoon, Ms. Swanson. I was just about to show her to our squid exhibit before cleaning the tanks. We'll be right on our way!"

Ms. Swanson nodded before waving them on.

“I’m glad you found a place here, Mr. Oldaker, and Felicity too. I look forward to seeing you around.” the new girl added politely as she left.

Ms. Swanson and Mr. Oldaker stood for a few moments watching Felicity before she flipped her tail and swam to join some other fish.

“I’m glad you decided on the bigger tank, Mr. Oldaker. It’s been good for her and for you too.” Ms. Swanson said.

“Yes, I wondered if I’d ever be at peace with the world again, but seeing her happy does make me feel better.” he replied.

“You know, people aren’t like angelfish, Bernard. We have much more than tanks to thrive in. Felicity is finding her own way; don’t you think you should too?” Ms. Swanson inquired.

“I’m getting there.” he replied stubbornly.

“Maybe we could start with a cup of coffee?” Ms. Swanson asked.

“I told you, Jeanette, I’m no different from angelfish or otters. I’ll always have my heart set on Lynn.” he stated.

“Only certain sea otters behave that way, Bernard. I’m a marine biologist, lest you forget. Several creatures are monogamous only because of certain conditions, namely captivity. You’re out in the world more now aren’t you? Surely you see it too.” she retorted.

Bernard chuckled for a moment then pursed his lips together to ensure he had gained proper self-control. “What can I say? I’m a committed fellow and that isn’t likely to change.”

“Nearly all animals eventually find another partner after they’ve finished mourning the loss of their original mate, Bernard. It’s only natural. The loneliness business eventually comes to an end.” she responded.

He looked thoughtfully for a moment before speaking. “A person can spend an entire lifetime searching for the right mate, can’t they Ms. Swanson? I’d imagine that would be just as lonely. Missing someone isn’t always so lonely; it is evidence of a lasting and meaningful love. I can take joy and comfort in that.” he rebutted, adding a soft smile as he spoke.

“Alright, perhaps, I’m the one who is lonely then. Regardless, I intended to ask you to accompany me for a cup of coffee or maybe tea in your case. We can all use a friend at the very least, right?” she retorted.

He returned to peering into the aquarium at his beloved fish in front of him. She had been gathered into a group of her own kind, and he smiled at that cheerfully before responding to Ms. Swanson.

"Sure, a cup of tea sounds great." he smirked.